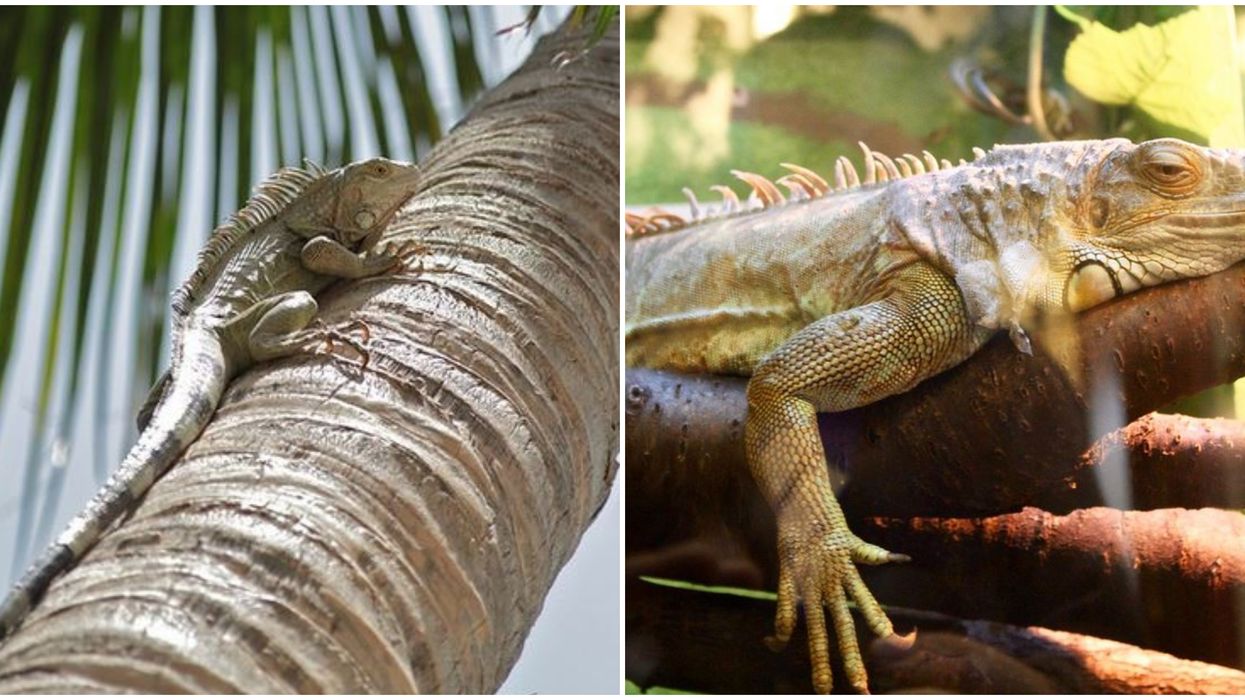 As if the forecast in Florida hasn’t been bleak enough for us humans already with freeze warnings in several counties, animals across the state are also feeling the weather's effects. If you’re in the Southern areas of the Sunshine State, there’s a warning for iguanas falling from Florida trees! Time to be on the lookout.

As temperatures plummet, so do these cold-blooded reptiles that need the heat to move. Even without an overcast sky, you may still want to carry an umbrella.

The National Weather Service issued the warning on Wednesday morning when temps were so low that the poor lizards seemed to be dropping from their perches like flies.

This is certainly not a normal occurrence, but with the sidewalks practically littered with immobile lizards, the city issued the warning to keep citizens vigilant.

For those worrying about the iguanas’ health, the dangers they face aren't so much from the falling temperatures. They’re not exactly freezing, or dying, but rather entering a state of hibernation to conserve their energy.

Iguanas do, however, run the risk of becoming roadkill or being attacked by dogs and other wild animals while immobile.

This Twitter user expressed sympathy for the fallen lizards and relocated them to a safer spot.

Greeted on this crazy-cold day with fallen iguanas. (I relocated them to the front so they didn’t become dog treats… https://t.co/VXI92huCVM
— Whitney Leon, LCSW (@Whitney Leon, LCSW)1579702581.0

Other South Florida natives are not as sympathetic to the lizards’ plight.

This Twitter user pointed out that although they feel bad for them as a reptile enthusiast, they are an invasive species and shouldn't be here to begin with.

@DCohenNEWS @OfficialJoelF I'm sad as a reptile enthusiast, but the little guys are an invasive species they really shouldn't even be there.
— Weeb (@Weeb)1579712264.0

With females producing nearly 80 eggs a year, and the climates of Florida perfectly mimicking their tropical South American home, it’s no wonder that iguanas are thriving here.

While they’re not dangerous or aggressive to humans, iguanas have been known to damage seawalls, sidewalks, and local fauna as they dig tunnels.

A male iguana can even reach lengths of 5 feet and weigh up to 20 pounds. Just goes to show what a consistent diet of Miami street food scraps can do for you.

Of course, as with anything on the internet, memes and jokes come out in this somewhat comical situation. This Twitter user wasted no time finding the perfect reaction image.

Another Twitter user joked that it might be a good time to try a new shish kabob recipe. There is actually a restaurant where you can eat iguana in Miami after all.

In 2018, a similar “lizard stunning” occurred when temperatures dropped to the 40’s in January.

These are the lowest temps the Sunshine State has seen in almost a decade, as reported by Fox News Senior Meteorologist Janice Dean. They’ve been so low, in fact, that theme parks are even shutting their doors.

It’s safe to say that when lizards start falling from the sky, the internet will have a lot to say about it. Lately, the internet has also been quite a buzz over rumors of a Lord of the Rings land coming to Universal, go see for yourself.