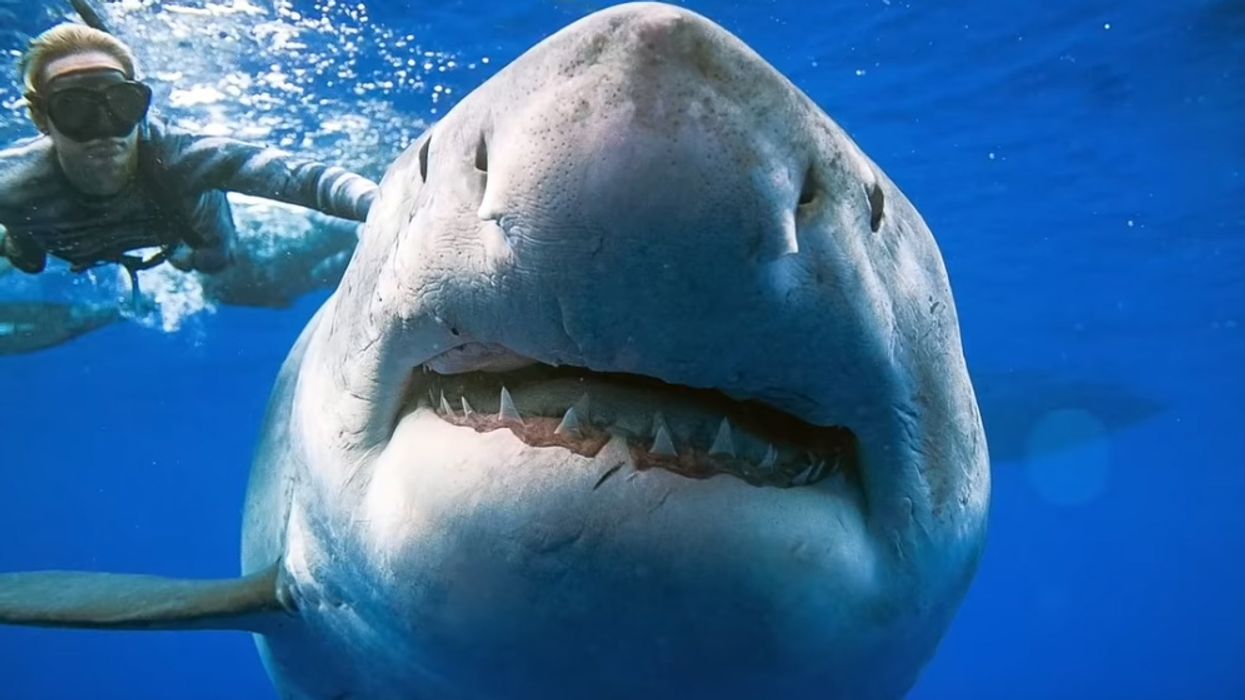 The world's largest known Great White Shark, namely Deep Blue, has been hanging out in Hawaiian waters this week. Divers spotted the monstrous fish swimming about nine miles off the coast of Oahu while she was feeding on the carcass of a dead Sperm Whale.

This surprisingly docile creature is believed to weigh around 2.5 tons and measure up to 20 feet - making her the largest identified Great White Shark. She is estimated to be around 50 years old, as she was tagged 20 years ago off the coast of Mexico. Great White Sharks spend decades growing to their maximum capacity and can live upwards of 70 years.

Shockingly, the two divers who paid Deep Blue a visit decided not to use a shark cage and instead just dove into the water with their scuba gear, swimming right alongside her and at points touching her.

Although this was a pretty bold move on the driver's part (I mean, have they never seen Jaws?) Deep Blue did not seem to mind and just went about her business swimming around and looking great for the camera. At several points in the video, you can get a good view of her humongous chompers.

The last time Deep Blue was filmed was in 2013, and the divers were smartly protected by a shark cage. Although, again, she seemed rather uninterested in the divers.

"She was very calm, not at all nervous, and she was just doing her circles around us. She wasn't very interested in us," Michael Maier, the videographer of the 2013 footage said.

This video below shows that encounter:

Since the most recent encounter, the internet has been blowing up with people talking about the majestic girl.

Guys I’m obsessed. she is all over my instagram TL. This shark is now thought to be the largest white shark ever recorded on camera in HI and Ocean (the diver) has actually met this exact same shark in Mexico! Her name is Deep Blue💙 so crazy this shark graced Hawaii yesterday... pic.twitter.com/JJBOso4lZr

READ ALSO: A Rare Super Blood Wolf Moon Will Be Visible Over Florida This Month

Most exciting of all, some experts are saying it looks like Deep Blue is pregnant! This Twitter Tweet leads to a video that clearly shows the sharks massive belly.

There's a good reason this great white shark spotted off Oahu today has a swollen belly. Experts tell us she is 'Deep Blue', believed to be the largest white shark on the planet at 7-meters long. She was also... https://t.co/K2yFRUvIOo

This is the first time since 2013 that Deep Blue has been spotted.