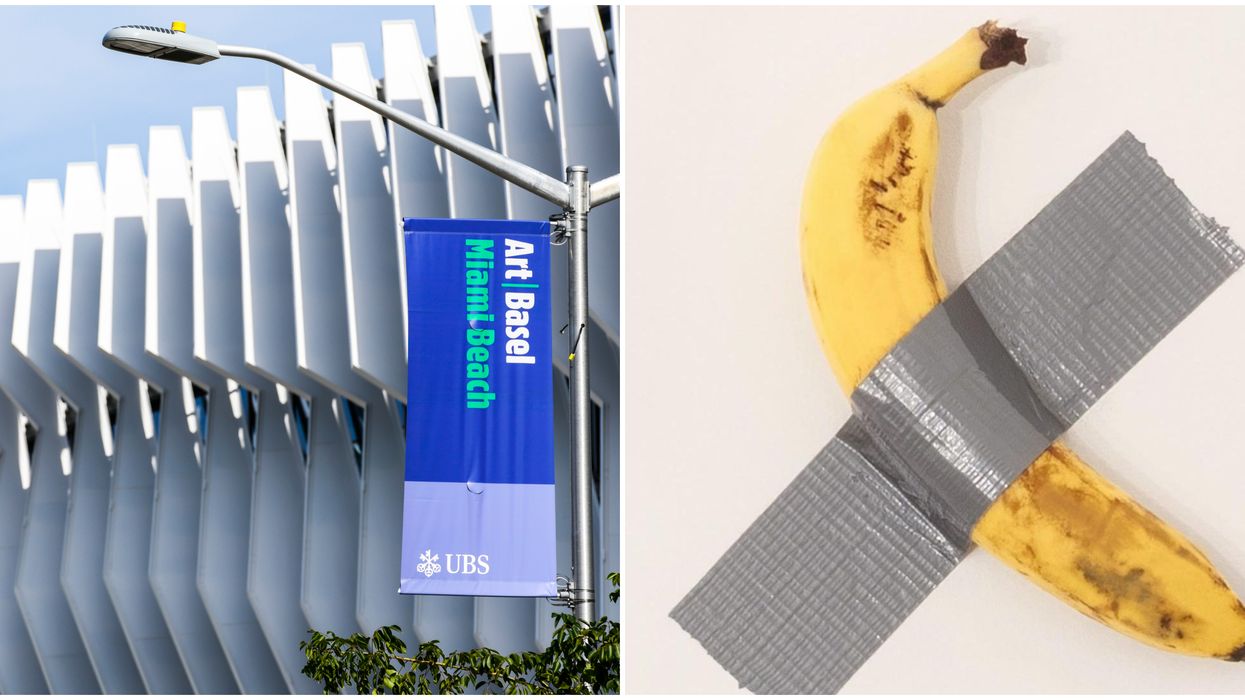 In today's day in age, almost anything can be art: even bananas duct-taped to a wall. It's hard to say what inspired someone to create such a piece, but it certainly has caught its fair share of controversy. So what all has happened with the Banana art that was on display in Miami?

If you haven't heard of the banana art yet, it was created by a 59-year-old Italian artist Maurizio Cattelan. The installation has been considered a "symbol of global trade," garnering attention from all around the globe.

Whether you love it or hate it, the work aptly named Comedian has gotten a lot of attention — both positive and negative.

From a colossal wave of visitors to selling for an insane amount, and even vandalism, here are all the ridiculous things that have happened with the Miami duct tape banana art so far.

It Was Taken Off Display Early Due To Extreme Visitor Behavior

According to a statement in an Instagram post by the Perrotin Gallery, the banana art posed a serious risk to its visitors. Following recommendations, the piece was removed at 9 a.m. on Sunday, December 8.

Far too many flocked to see this controversial piece at Miami Beach's Art Basel, messing with the banana, and trampling over each other to get a closer look.

This made access to the other exhibits near impossible, as well as put the safety of museum-goers and other artworks adorning the hall at risk of harm or damage.

Despite the museum's efforts, stationing guards to create uniform viewing lines wasn't enough and the crowd was still uncontrollable.

A multitude of incidents factored into the decision to remove the piece early, including several that are on this list.

"Only in Florida" as they say, right? New York-based performance artist David Datuna performed a piece he called Hungry Artist by literally walking up, peeling the fruit from the wall, and eating it right there in the gallery.

When asked in an interview with Dazed why he did it, he simply replied, "I was a little bit hungry at the time. I had eaten nothing else that day, and I didn’t eat anything after either. I didn’t eat this day because I wanted to keep just my art banana inside my stomach. So now my body is 10% Maurizio Cattelan."

Dazed went further, asking him what it tasted like, and the self-proclaimed "Hungry Artist" chimed back, "It’s going to be a very very short answer... just delicious. But not just the banana, it’s not about the banana; I didn’t eat the banana, I ate the installation of Maurizio Cattelan and he is delicious."

Another banana was put on the wall to replace the one he ate, but this incident ultimately led to Art Basel's decision to remove the artwork, among other reasons.

Who would pay for a piece of fruit duct-taped to a wall? Apparently, multiple people are bananas for this banana.

Reportedly, two French collectors bought rights to the first and second editions of the artwork for $120,000 — which included a certificate of authenticity from the artist, as well as granted them the ability to buy and replace the slowly rotting banana at their leisure.

The third transaction of this piece hasn't been confirmed yet but is expected to sell for $150,000 to a museum. This might just be the most expensive banana to ever exist.

The Banana Has Its Very Own Instagram Page Dedicated To It

Following all of this attention, a page dedicated solely to the taped fruit popped up on IG, created and managed by the international Perrotin Gallery.

The page, named @cattelanbanana, features photos and videos of what's currently happening with the banana, including memes and other renditions of the work popping up all over; from direct copy cats to more tongue in cheek mockings of it such as noodles, arms, cats, and more stuff taped up just like the b'nan.

The page already has over 8,000 followers.

Someone Vandalized The Work, Writing "Epstein Didn't Kill Himself" In Lipstick

This popular cultural meme is a bit dark, touching on Jeffery Epstein's death and the corruption that occurs when you have money or power as a government entity.

The conspiracy really took off following an autopsy report that claimed Epstein's death had more evidence that was consistent with homicidal strangulation rather than suicide by hanging.

While it's not been confirmed one way or the other, many are still adamant that the billionaire sex offender did not end his own life — but was murdered to cover up what was really going on behind the veil.

This sparked some form of inspiration in 46-year-old Roderick Webber to jump in on the attention the banana was getting to spread the message, vandalizing the piece by writing "Epstein Didn't Kill Himself" in bright red lipstick.

The Massachusetts native was arrested on charges of criminal mischief.

Who knew a banana could get so much attention? It only further adds to the complexity of engaging with the question "What is art?"