We relate, and we're only coming out if you have bacon. 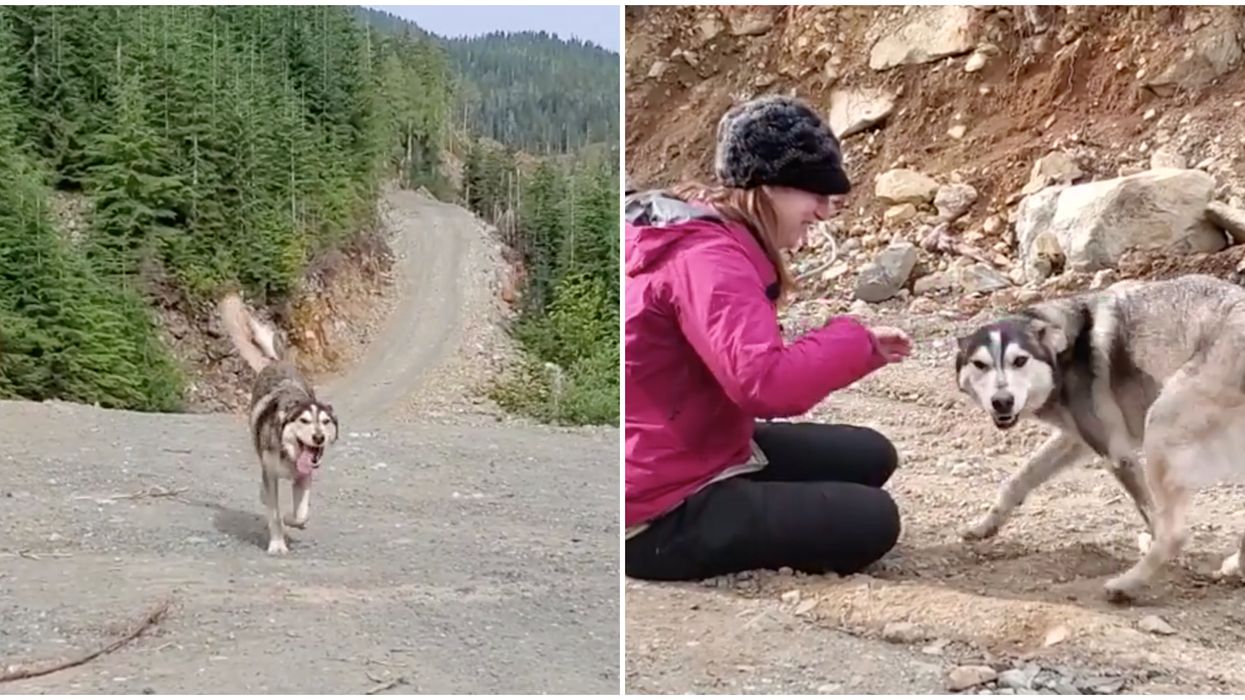 A Vancouver Island couple was walking their dog, Beira near Circlet Lake in Strathcona Provincial Park on Sunday, Aug. 11 when their pet vanished. The owners have been worried since they lost their dog and have been eager to find her. After nine days of separation, their Vancouver Island dog was found all thanks to the sweet smell of bacon.

After extensive search efforts and overwhelming community support, the smell of freshly fried bacon is what finally brought their beloved pup home. Narcity caught up with Beira’s owner, Kacey Wall, to learn more about the sizzling story.

Kacey Wall and a couple of friends went for a hike that afternoon on August 11. She was taking care of another husky, Pilot, that day as well. After the group passed the busier area of the trail, about an hour in, Kasey let the two dogs off-leash.

“I had been keeping a very close eye on them because the trail was fairly new to Beira and I wanted to make sure she was paying attention and [staying] close by,” she told us. Soon, Wall let her guard down and began chatting with her fellow hikers. She explained that after only about 10 minutes of engaged conversation she realized she hadn’t seen the two dogs in a little while.

At first, she didn’t think it was a big deal. After calling the dogs for a few minutes, Pilot came running but there was no sign of Beira. “With every passing moment I became more distraught,” Wall shared.

After hours of frantic searching solo and with her partner Chris who came as soon as he heard, they were forced to turn around and leave. “I had no camping equipment or food. We had no choice but to leave and come back Monday morning. Chris and I walked back to the parking lot, devastated,“ she said.

At the time, the two were filled with guilt, anguish, and hope. Though they were worried, they knew Beira was a “tough cookie.” Days began to pass with no sign of Beira, even with constant searching. “We were hiking between 25-35kms per day and no sightings we were starting to wonder if it was already too late,” said Wall. They also started the Find Beira Facebook page so community members could help in the search efforts.

When nine grueling days passed and with only one reported sighting of their beloved dog, Beira’s owners received some unlikely advice. They were told that the smell of bacon might be the golden idea to bring back Beira. This interesting tip came to them from Terry at Reuniting Owners with Animals Missing (ROAM). Wall said it sounded like a great idea because the smell of bacon is strong, distinct, and that “Beira LOVES bacon.”

They were confident that if Beira was close enough to smell the bacon and hear their familiar voices that the plan would work. Sure enough, Beira emerged from the wilderness. Kasey Wall describes being reunited with her pup as surreal after nine days of tireless searching.

Beira is now safe at home with her loving family. “She’s back to her quirky little self,” Kasey told us. As for moving forward from the traumatic ordeal, “We learned a lot and will do things differently in the future,” she said.

Running for bacon after nine days of hiding is maybe the most relatable thing we’ve here this year.