Poppies picked from Flanders Fields in 1916 show the human side of war. 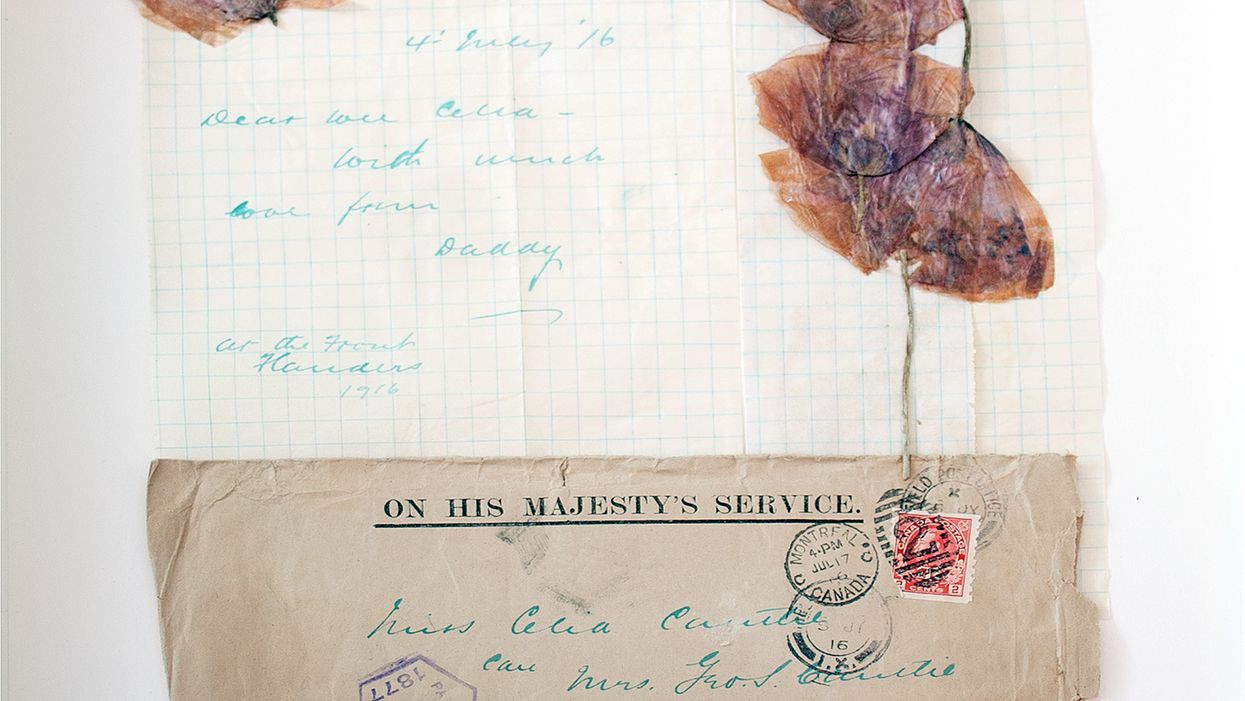 More than 100 years after the First World War ended, Canadians who fought overseas are still being remembered thanks to letters with flowers in them sent back home and passed down through generations. Poppies from Flanders Fields during World War I are part of an exhibit touring Canada. The exhibit aims to tell the story of human nature during wartime through personal objects and artifacts.

War Flowers is a travelling exhibit about Canadian soldier George Stephen Cantlie who fought during WWI and sent letters back to his family from the front lines. Each letter had flowers inside that were picked from wherever he was when he wrote them. One of those letters was from Flanders Fields.

Currently, the exhibit is on display until January 5, 2020, at a museum in Montreal.

"This exhibit tells stories in a way that balances hope and love with reality, reaching across continents," Heather Campbell, the great-granddaughter of Cantlie, told The Canadian Press.

While in the war, Cantlie would write to letters to send back home to his wife and youngest daughter. During the day he would pick a flower and put it between two pieces of paper then press it in a book to dry it out so he could send it in the letter.

Now those flowers and letters are on display for Canadians to see.

The exhibit has travelled to different parts of Canada like Grand-Métis, Quebec and the Canadian War Museum in Ottawa in 2017. It was also shown in Toronto for a few months in early 2018.

From May to September in 2018, the War Flowers exhibit was on display at the Visitor Education Center at the Canadian National Memorial in Vimy, France.

Cantlie's letter from Flanders Fields that included poppies was from July 4, 1916, and read, "Dear Wee Celia: With much love from Daddy. At the front Flanders. 1916."

Another one from the same location dated June 28, 1916 included daisies and read, "Dear Wee Celia. From the trenches and shell holes with much love from Daddy."

Cantlie enlisted in 1915 when he was 48 years old. During his time in the war, he fought in Belgium and France, including Flanders Fields.

He had five children when he left for the war and the youngest, Celia, was only a year old. In a video about the War Flowers exhibit, Cantlie's grand-daughter Grace Elspeth Angus said that he sent the letters and flowers to his youngest child so that she would remember him.

"Maybe this is a universal message to everyone that people do survive the best they can," Campbell said. "They still can find beauty amidst things that are pretty horrific, and we should celebrate that and remember that. It's really symbolism, isn't it?"

According to The Canadian Press, once the exhibit closes in Montreal in early 2020, it will move to Edmonton next.