Morgan Geekie scored twice on his NHL debut in front of his family. 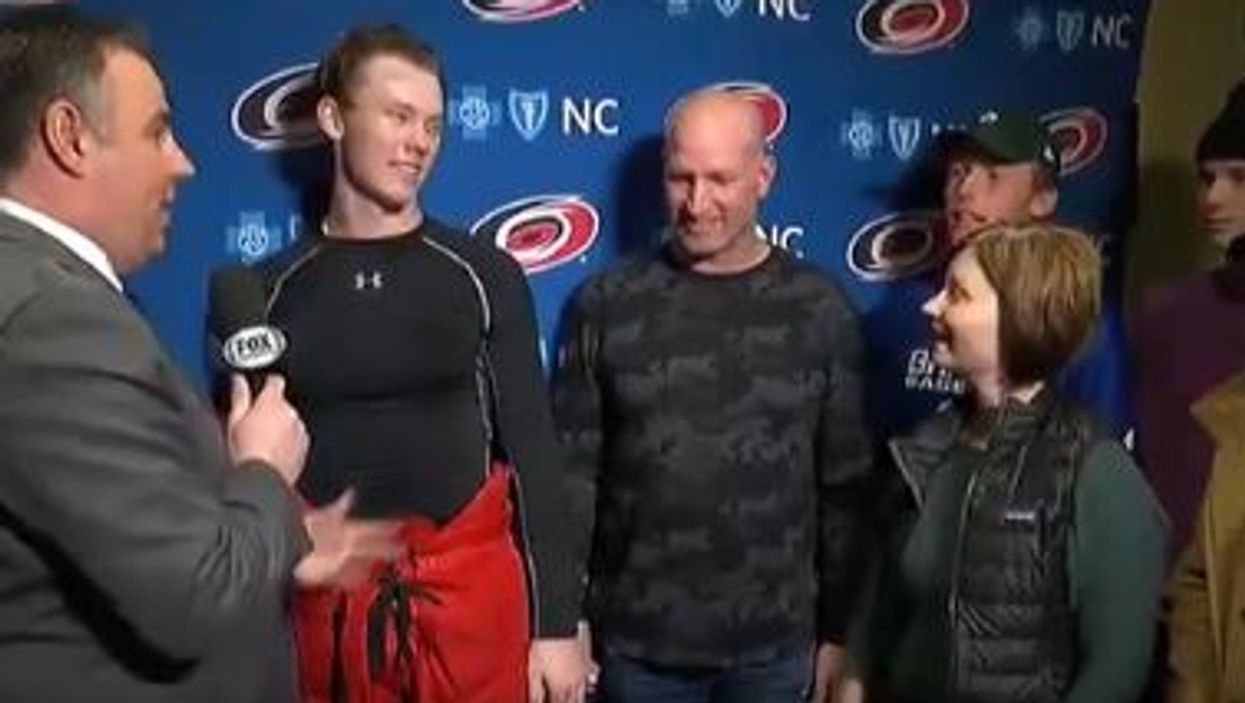 This is as wholesome as it can get. Canadian rookie Morgan Geekie's NHL debut was about as sensational as it can get, as the 21-year-old managed to score two goals in his very first game on March 8. The Carolina Hurricanes talent then made the once-in-a-lifetime moment totally adorable by inviting his entire watching family into his postgame TV interview.

On Sunday, March 8, the 'Canes pulled out a 6-2 win against the Pittsburgh Penguins.

But the game was particularly notable — for Canadians, anyway — for Straithclair, Man.-born Geekie's NHL bow.

And, with two goals and one assist, Geekie definitely made more of an impression then either he or his entire watching family could surely have hoped for.

According to the ESPN Stats & Info Twitter account, Geekie actually scored his first career NHL goal with his very first shot ever in the league.

Hs second goal means he becomes the second player in the franchise's history to enjoy a multi-goal NHL introduction.

Despite showing off his skills on the ice, the most notable part of the whole day was probably Geekie showing his humble side by bringing ma, pops, and his whole immediate family into his post-game TV interview.

Geekie and his dad also shared a sweet moment as his father had the honour of presenting him with the puck he used to score his first NHL goal.

"Yeah it's great that they could come out at such a short notice and kudos to the 'Canes for kind of making that work," Geekie said.

"We're just trying to take it all in the next couple of hours here and keep it going," he added, when asked if the moment felt real enough for him.

Well, it was definitely worth the trip for Geekie's family who made the trip all the way from Manitoba to Pittsburg, Penn. to see this unfold.

"And I stayed there sitting because I couldn't believe he actually scored his first goal in his first game so it was awesome."

In fact, this interview was as pure a Canadian sporting moment as the time Toronto Raptors player Terence Davis Jr., shared a snack with a little Raptors fan.

This is the wholesome story we definitely needed on a Monday morning.

And as if his goalscoring exploits and family focus weren't enough to endear you to Geekie, he doubled down on the Canadianness by wearing a John Deere hat in another interview.

"Morgan Geekie is definitely from Manitoba," read a tweet accompanying a photo of the young breakout star in the hat.