Noah Centineo's latest Netflix film is being ripped apart for being the worst thing since "Insatiable." 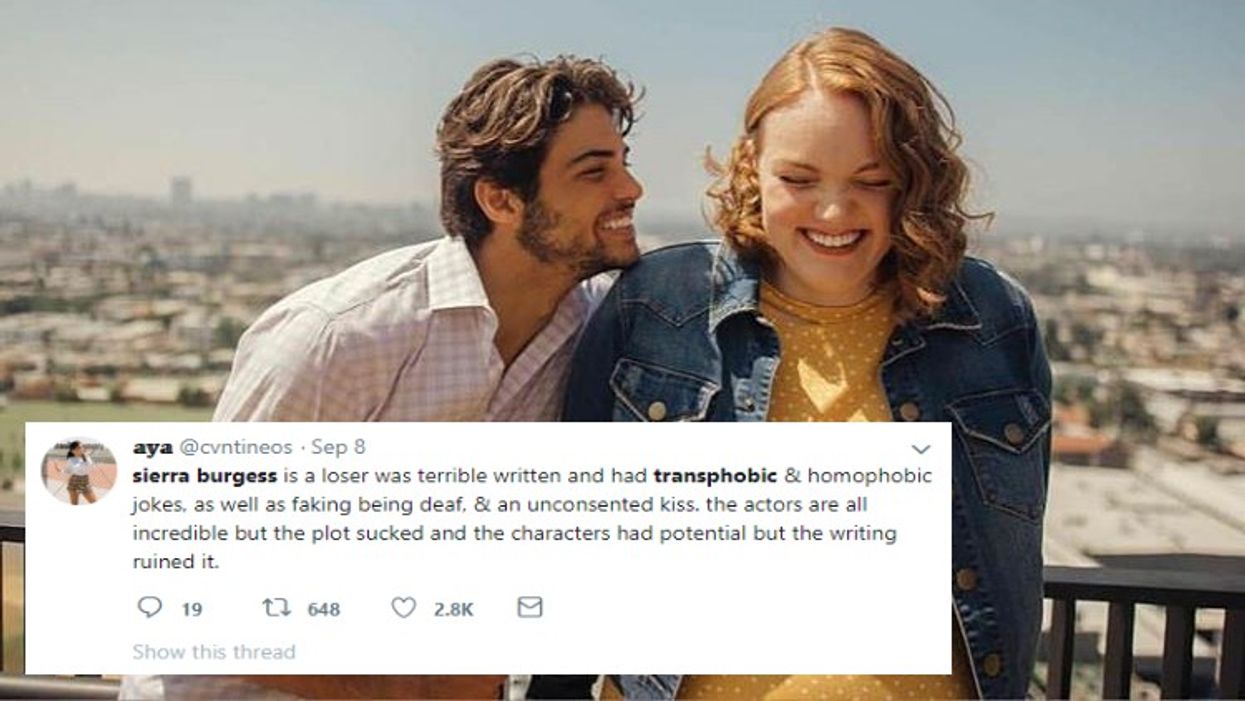 The latest Netflix film "Sierra Burgess Is A Loser" garnered a lot of attention for promoting body-positivity and having a strong female lead. Not to mention it also stars everyone's favourite new heartthrob from "To All The Boy's I've Loved Before", Noah Centineo.

The movie premiered on Netflix Canada earlier this month. It follows a high school student named Sierra Burgess, played by Shannon Purser - a.k.a. Barb from "Stranger Things," who is bullied by her peers but overcomes and finds a way to be confident and be her true self.

Prior to the film's release, it was being hyped up as a feel-good movie, full of body-positivity and inspiring messages for teenagers. But, now it's getting some negative attention as well.

Twitter is blowing up with criticism about the film, calling it transphobic, homophobic, and also points out catfishing and consent as other problem areas. Now the movie's writer, Lindsey Beer, is responding.

sierra burgess is a loser disappointed me. transphobic & homophobic jokes, catfishing and faking a disability is suddenly "ok". just because you've got a hard time fitting in doesn't mean being a straight up dick is fine and consent is not a thing anymore. would not recommend

people not liking sierra burgess is a loser are not fatphobic. the movie was problematic making homophobic&transphobic jokes, not to mention sierra literally manipulated her love interest, and backstabbed her friends in the movie. the movie was basically insatiable w/a diff plot pic.twitter.com/W6QDo1Lmsr

it’s sad that the only “body positive” content netflix can produce (insatiable, sierra burgess, etc) ends up sending all the wrong messages and relies on homophobic/transphobic humor

It isn't very long into the movie before the "mean girl" makes a joke to the main character, that she should do her school assignment on her "trans experience" insinuating that Sierra isn't a cis-gendered woman and that is meant to be insulting.

People are now calling the film and its stars out on Twitter. But, one person went as far as to reach out to the movie's writer, Lindsey Beer - and she actually responded. In her response, Beer attempted to explain why she decided to include a trans joke in the film.

So the writer of #SierraBurgessIsALoser is DMing me and WHEW what a mess dhdjdkd pic.twitter.com/PaavLuPHyz

In screenshots of the conversation with Lindsey Beer, the writer says that she didn't mean to offend anyone with the comments and the trans joke was simply meant to show how truly terrible the mean girl character was. However, it was then pointed out to Beer that there are other ways to show someone is a bully without targeting an extremely vulnerable community, such as transgendered teenagers.

Beer went on to justify her decisions saying that she was bullied in high school and was called a lesbian and trans when she was a teenager, so she was just basing the story on her own experiences. None the less, people maintained that being bullied as a teen didn't give her the right to marginalize an entire community and using words like "trans" and "lesbian" as insults only added to an already dangerous stigma. While the transphobic joke is the main issue people are taking with the movie, Twitter users have also expressed concern over the fact that Sierra pretends to be deaf to avoid talking to a boy.  The movie also portrays non-consensual kissing, and throughout the film, an ongoing joke is that Sierra is called a lesbian.

Amid all the backlash, it appears that Lindsey Beer has shut down her Twitter account and has not made any public comments addressing the accusations that the film is offensive.