He's got all the family man vibes. 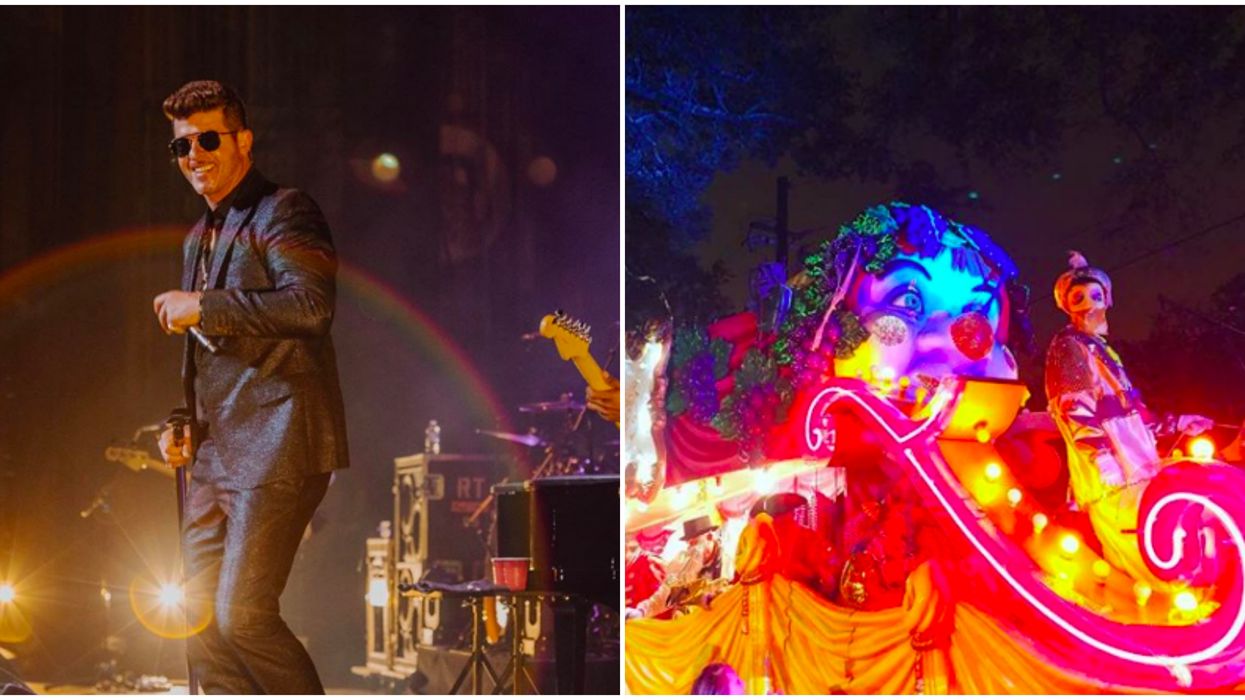 The Krewe of Bacchus is a super krewe (an organization that hosts a parade during Mardi Gras season) that is known to put on a big show during its parades each year.

The 2020 theme is Wild, Wild West which will take over 21 themed floats. Expect to see light-up bolo ties and light-up cowboy hats thrown out for revelers to catch.

And you'll be seeing Robin Thicke sporting a shiny crown because he has been named King in the 2020 Krewe of Bacchus Parade, which takes place the Sunday before Mardi Gras (Feb. 23).

It's no coincidence that vocalist (and hottie) Robin Thicke was chosen as Bacchus LII. He reigns 32 years after his father Alan Thicke who represented the parade as Bacchus XX in 1988.

Robin is proving that he's the cutest family man ever by reminisicing on his first rodeo in the parade alongside his father.

On this Instagram post, Thicke notes, "I rode on the King’s Float with my father when I was a boy and it was one of the best experiences I ever had with him."

He then goes on to reveal his excitement that his son (Julian), two daughters (Mia and Lola) and wife (April) will be joining him to celebrate.

Fans are showing lots of support on the Facebook announcement made by the official Krewe of Bacchus Parade page.

One user in the comments section says, "HAIL BACCHUSKING THICKE!!! I think it is very cool that they are continuing on a great tradition as his father road as king and now him and hope that his son too may reign some day. Keeping true to the traditions. Love Louisiana and our southern hospitality."

Previous Kings include big names like Will Ferrell, Anthony Mackie and Drew Brees.

The parade will take place at 5:15 p.m. on Feb. 23 on the corner of Napoleon and Tchoupitoulas. It will end at the Ernest N. Morial Convention Center.

You might have to buy your own beads.
Sean Pavone | Dreamstime

Mardi Gras is quickly approaching but the city where it's celebrated the most, New Orleans, won't be as exciting this year due to the  COVID-19 pandemic.

New Orleans Mayor LaToya Cantrell announced multiple new restrictions that will be put into place on Mardi Gras weekend and Mardi Gras day in order to prevent the spread of COVID-19.

New Orleans is not letting COVID-19 put a damper on certain Mardi Gras traditions even though normal celebrations have been canceled for 2021.

Elaborately-decorated floats typically line the streets during Carnival leading up to Fat Tuesday, but the city called off all parades this year.

You can read your favorite novel on the private balcony.
Airbnb, Airbnb

If you're planning on making a trip to the Pelican State sometime soon, look no further than this Airbnb in the heart of New Orleans. The closer you are to the French Quarter, Bourbon Street and more popular LA spots, the better. However, thanks to the stunning interior of this particular Airbnb in the Garden District of New Orleans, you may not ever want to leave your temporary home.

"Parks-Bowman Mansion: The Library" is the name given to an Airbnb listing by Adrienne, a Superhost on the site. The listing is in a great location and is shaded by many massive trees to make your stay feel secluded.

For just $120 a night before any additional fees, you and one other person can stay in the room of this estate named the "Library."

You and your companion will share a queen-sized antique bed, a private shower, a wide-screen TV, a mini-fridge and more in the Library.

Plus, there's a porch with seating outside to peacefully read your favorite from their wide selection of books.

Throughout the home, there's a music room, a lady's parlor, a decked-out kitchen and more to make yourself feel at home. Or in another century.

There are even gardens and a full-size lap pool outside to enjoy as well.

From 578 reviews, the listing remains at a 4.88 rating, which is pretty stellar. Recent reviewers call their stay "seriously amazing" and a "magical experience."

Whether you're a tourist or a Louisiana native looking for a fun staycation, this is an awesome spot to check out.

Gorgeous Louisiana Mansion With A Library

Why You Need To Go: You'll feel like you've been transported to another era thanks to the incredible interior and exterior of this Louisiana home.

These prices and terms of occupancy are confirmed at the time of publishing, but they can change at any time.

This Article Has Been Removed