Ontario police warn that distracted driving is no different from the Bird Box challenge. 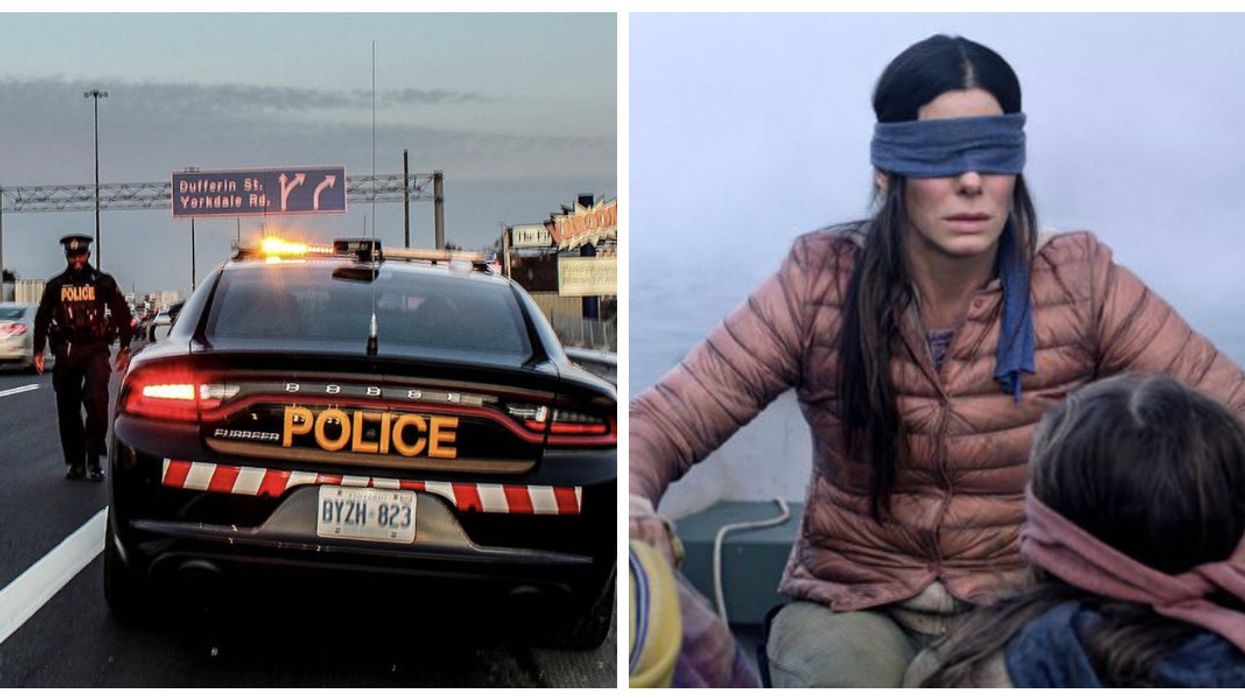 If you haven't heard of the Bird Box challenge by now, you may be living under a rock. But for those who don't know, the challenge involves living a day of your life blindfolded as Sandra Bullock does in the super popular new Netflix film, Bird Box.  Obviously, though, this challenge is dangerous as it severely limits your ability to navigate the world safely. It's so dangerous that Netflix had to issue a warning telling people to stop doing it. None the less, the challenge is still trending.

Now, people are actually using the trend to their advantage. An Ottawa Police officer, who uses the online persona the Bearded Cop,  is bringing awareness to road safety. The officer jumped on the blindfold bandwagon recently to talk about distracted driving.

In a tweet from his account, the Bearded Cop shared an incredibly alarming statistic. If you're driving at 90 km/hour -which would essentially be like driving on any major Ontario highway and some other big roads - while reading a text message for only 5 seconds, it would be the equivalent of driving across a football field blindfolded.

This statistic isn't new. In fact, the Canadian Automobile Association originally posted it on their own website along with several other concerning stats about distracted driving. But with living and even driving blindfolded being a big trend right now, it's super relevant for the Bearded Cop to be sharing it now.

“Checking a text for 5 seconds means that at 90 km/h, you’ve travelled the length of a football field blindfolded.” @CAA #distracteddriving #makebetterdecisions pic.twitter.com/Wpfpt1ar2E

People responding to the tweet people have also made the connection between distracted driving and the Bird Box challenge. In one of the responses, one user shared a meme that points out how there is absolutely no difference between the Bird Box Challenge and texting and driving.

Meanwhile, another Twitter user responding to the tweet simply made the connection with a Bird Box gif.

The connection between distracted driving and being blindfolded or the Bird Box challenge is even more relevant since some people doing the challenge have actually attempted driving while doing it.

Among those who have taken on the incredibly dangerous stunt is YouTuber Jake Paul, who spent 24 hours blindfolded for a video of the challenge. One of the first things he did in his challenge was trying to drive. While he warns viewers in a written disclaimer that it was all done in a controlled environment, it's still super dangerous.

There have been no reported deaths from people attempting the Bird Box challenge so far. Distracted driving, on the other hand, was responsible for at least 10% of fatal driving collisions.