'Tiger King' Or Carole Baskin? This Florida Starbucks Is Asking For Your 'Tips'

Who would you rather be stuck with? 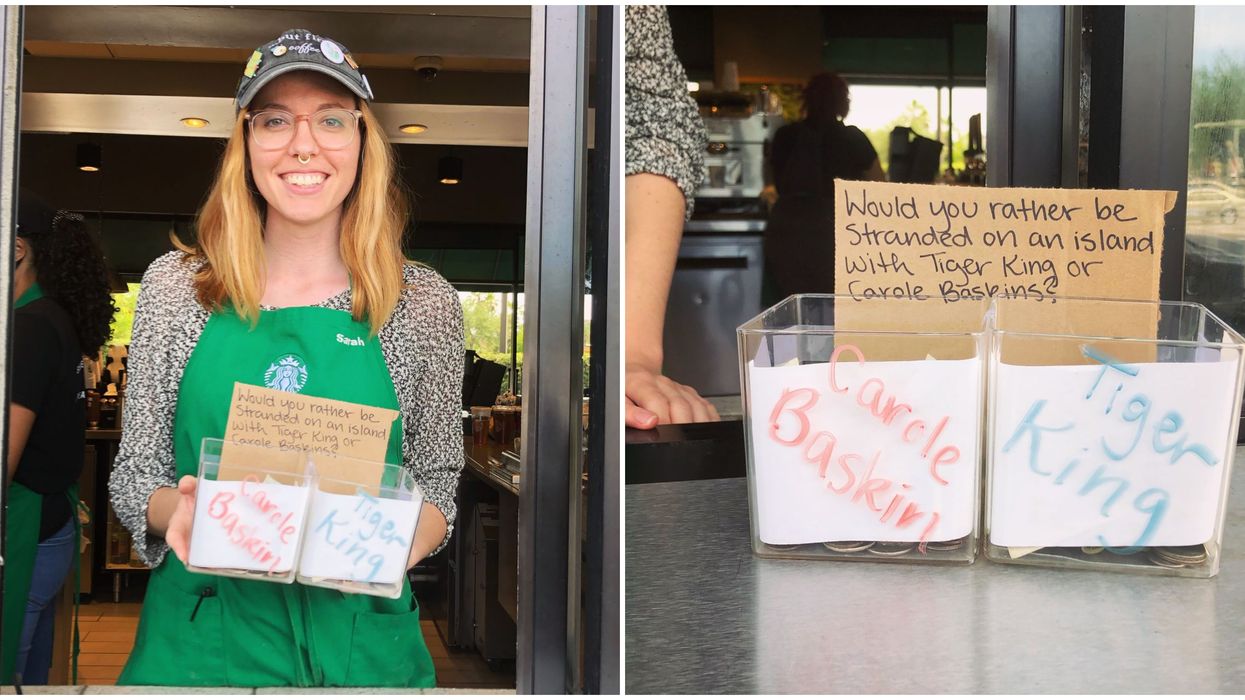 Netflix’s recent docuseries Tiger King has taken the collective world by storm, sparking many a debate and discussion over the characters, storyline, and alleged guilty parties within the show's murder-for-hire plot. When it comes down to who you'd rather be stuck on a deserted island with from Tiger King, an Orlando Starbucks has taken to polling their customers via tip jar to find out who they'd prefer. The poll shows a pretty clear trend, but who would you pick?

Sarah is the employee at the Lee Vista Promenade Starbucks in Orlando who started it all, and Narcity spoke to her for the full story on her tip jar poll.

What began as a way to entertain people and get them talking turned into an unexpectedly hilarious story.

As Sarah explained, people have so far shown that they dislike Carole Baskin, owner of Tampa's Big Cat Rescue, and will favor pretty much any option over her when given the choice in the polls — including Joe Exotic, who is currently in the lead.

Sarah changes up the theme of her tip jar poll every week or so. Past polls have included “Baskin-Robbins vs. Carole Baskin,” which Baskin-Robbins definitively "took home the cake"; the perfect pair for their sweet ice cream treats.

When asked who she would personally prefer to be stuck on an island with, Sarah was quick to go with the Tiger King.

“Cause I don’t wanna die,” she laughed, “I’d have to watch my back too much with Carole.”

Sarah also had a previous poll that pitted the Tiger King against The Lion King, and was surprised when Disney's The Lion King pulled in more tips.

Another poll Sarah started titled, “Who was the better wizard, Harry Potter or Gandalf?” named Harry Potter the winner. “People will throw money at pretty much anything Harry Potter related,” joked Sarah.

A cup'o joe is served best with a good laugh, and you can go cast your vote for your preferred character, ice cream, or island partner at the Lee Vista Promenade Starbucks now!