Someone Made A Florida 'Starter Pokemon' Set & They're So On Point 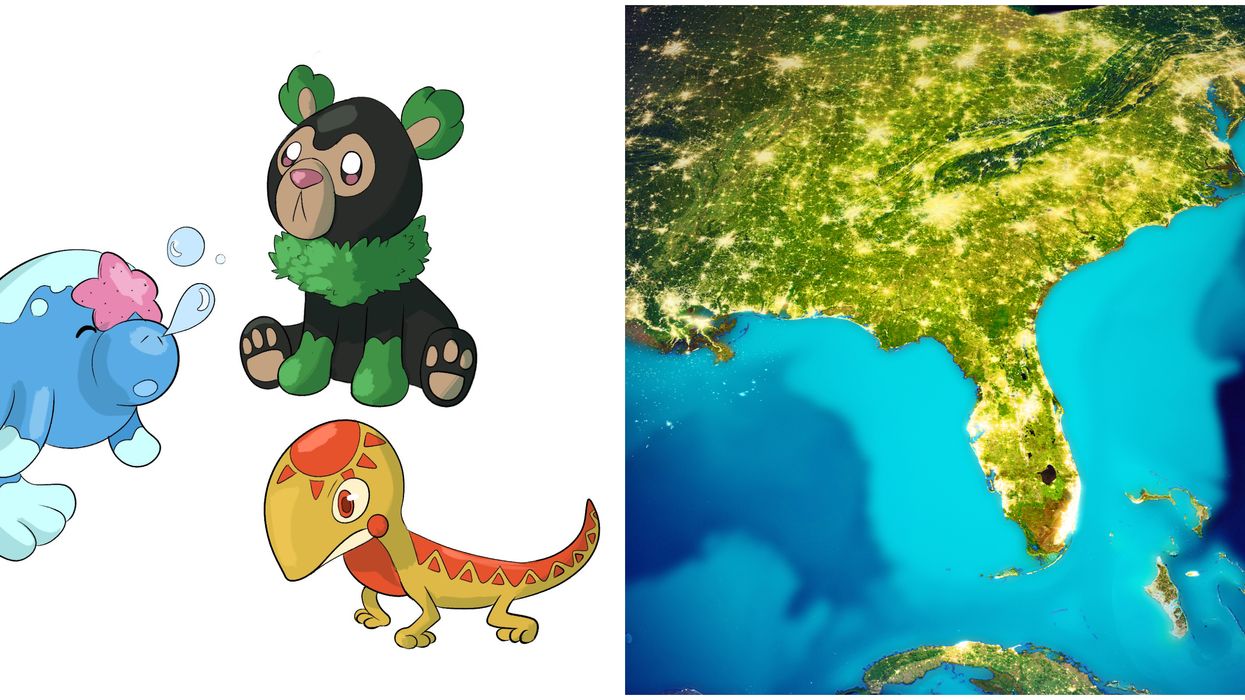 We 90's 'Pokemon' kids have all done it, created our own unique versions of starters in our imaginary Poke-worlds. Following the recent release of Pokemon Sword & Sheild, a Floridian artist took it upon themselves to create their own set of Florida starter Pokemon.

Miranda Bernheim, an art & design college student in Orlando, took to the Reddit forums under her account name u/mir_bearshome to post her creations. They are seriously adorable & totally Floridian too.

Everyone who has played the game knows that before you start your Pokemon journey, you have to decide which starter will accompany you. While some will lean towards the badass fire flingin' types, others have an affinity for the fluid water & earthy grass pals.

Bernheim made all 3, basing them off animals you would find in Florida as if it were it's very own region like Kanto or Johto, based off of real-life places in Japan or Kalos based off of France.

"I thought it would be cool if there was a Pokemon region based on Florida, like how previous regions have been based on other states & countries; I found coming up with ideas for it to be really fun." the artist told Narcity.

The young artist went as far as to give them each a little description too, just like in the 'Pokedex', a digital encyclopedia that tracks each creature as you catch them in the games & anime with 'Ash Ketchum' that inspired our love for the series.

Calfsea, our personal fave, was made to resemble the moseying manatees that flock to Florida's inland springs & warm coastal waters.

Apparently we aren't the only ones saying "Calfsea, I choose you!" either.

One commenter would even die for Calfsea!

Shrubling was made to represent the Florida Black Bear, & might just be the cutest grass starter made to date — too bad it's not an official option in the games.

There was a lot of feedback regarding the grass type, many suggested that it should have been a gator or python.

The artist thought about that, but felt that since Burmese Python are an invasive species it might be more fit for a regional variant, similar to 'Seviper' vs. 'Zangoose' like in 'Pokemon Ruby & Sapphire'.

Lastly, we have Luzard, modeled after Florida's native anole lizards that you can see literally EVERYWHERE when you walk outside.

People were shocked that the lizard didn't turn out to be a gator as well; they suggested that it could be the 3rd & final evolved form of Luzard.

The artist also had thought about this but felt that the anole lizards were more fun & Florida for a starter.

One commenter even went ham with shaping the whole world, bringing the vision of a Florida based 'Pokemon' game to life with their idea to have Publix be the 'pokecenter' — we wonder if they get healed by eating chicken tender pub subs.

The commenter also suggested cities that would hold each gym that you'd have to defeat to get your badge, listing the specialty type that each gym leader would use against you.

We even have our villainous 'Team Rocket' — Florida Man. Too perfect considering you can literally buy Florida Man merch here.

Ahhh all this sweet nostalgia meets real life makes us want to bust out our old 'Gameboys' or purchase Sword & Shield for the Switch just to get our Poke-fix.

All this feedback has the college student inspired to create more. "I plan to make more 'Fakemon' soon," said Bernheim, "the feedback has been great!".

Many commenters agree that they love this,

can already envision this as a game,

and wish it were real already.

We're right there with ya! It's clear that the artist's creativity here was well thought out, perfectly capturing the vibe of Florida with this fake Pokemon set.

The artist mostly posts her work to her Twitter page here if you want to keep an eye out for her next set of Fakemon, doing a majority of 3d modeling work which can be seen on her budding website here.

If you wish you could catch your very own Calfsea in the wild, check out these 6 best places to spot & swim with manatees in Florida or have a tour guide help you out on a manatee snorkel tour for only $26 with this Groupon deal.