If you're a foodie, you need to try some of these restaurants. 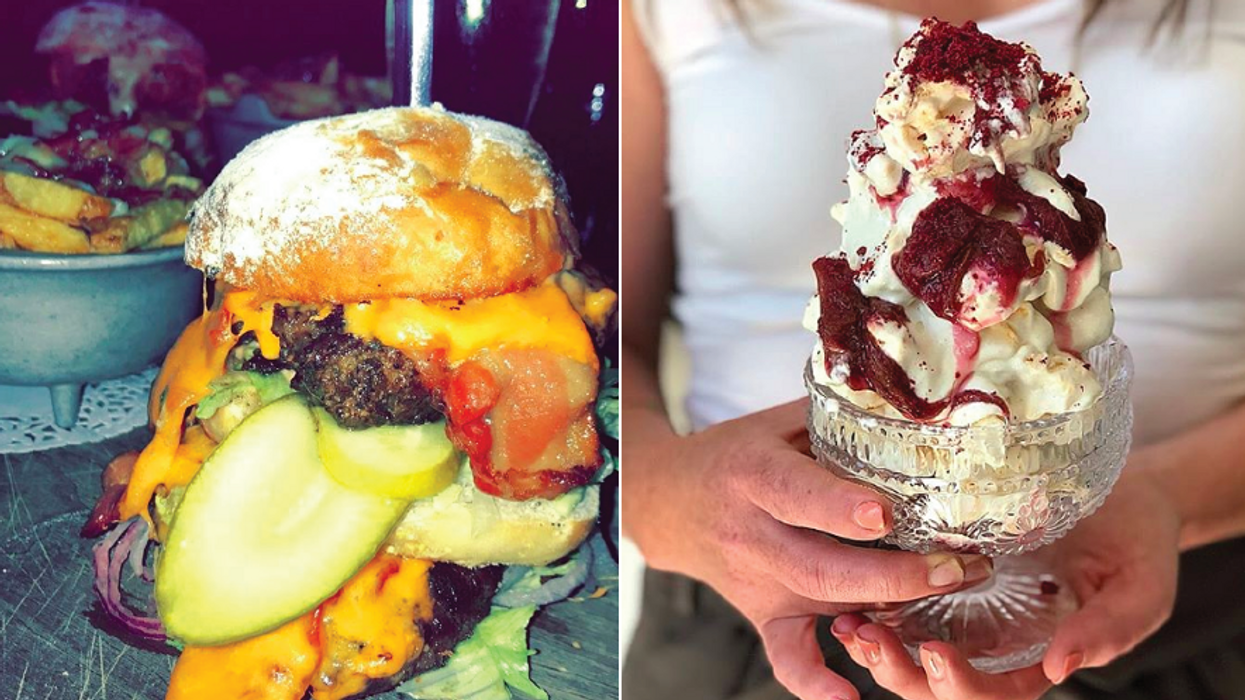 We live in an age when what's new and hot makes the top headline news. Bloggers, online reviews and PR monsters constantly and relentlessly marketing the next big thing when it comes to the chicest restaurants and bars (yes, I am equally as guilty). Sometimes they make it, sometimes they will fall off the charts.

READ MORE: These Are The Best Restaurants In Ottawa That Are Surprisingly All In The Suburbs

Truthfully, there are spots that are new and hot, but there are also restaurants that have survived the initial gruelling ten years of service while still delivering the goods. This puts them in a respectable pedestal in the food industry. Either way-- both categories of restaurants are equally praiseworthy.

Here are some loveable, bucket list restaurants in Ottawa you need to try if you haven't already: Les Fougères is nearly at its quarter-century of business, media praise and awards attesting to their reputation. They also recently remodelled their dining room and it's almost unrecognizable. They still have the original porch, backyard, vast kitchen gardens against the Gatineau woods along with bird feeders and swings-- but now they have glass windows wrapped all around the space for guests to take it all in. Yep-- I know what you're thinking: this restaurant actually has a backyard with the Gatineau woods as their backdrop, full with grass, flowers and garden swings?!

This restaurant serves dine-in guests but also acts as a gourmet shop catering to takeout food. The restaurant's renovation was aimed to offer a different eating vibe than their previous structure. Now, guests have more eating options, from a five-course tasting menu with delicious wine pairings, to a warm cheesy pizza with sweet pear and duck confit, enjoyed with a cold beer. What hasn't changed about Les Fougères is the restaurant's steadfast vision of creativity and invention. Okay, who doesn't love sushi? There's just something really cool about mixing traditional Japanese cuisine with like, bottle service. Some will say they're on completely different ends of the food scene spectrum, but I think sushi is definitely high-grade and bottle service can also be... high grade. Why not?

Tomo's aim is to create not only a fun and new culinary experience, but to create long-lasting memories for guests as soon as they walk through their doors. They serve a variety of pan-Asian dishes, fresh seasonal seafood from the Canadian East and West coasts, and traditional and specialty sushi rolls. Their Mohawk Roll (tempura shrimp, masago, avocado, cucumber, spicy mayo, topped w/ lightly seared salmon & scallion) is a popular one. This spot is the perfect weekend spot for delicious food, loud music and a fun crowd. Absinthe set up shop in 2006 in a previous schnitzel shop in Ottawa. Two years later, it moved down the street to its current home on Wellington Street West and the owner restructured the menu to a more modern and ever-changing cuisine. Well, some of their menu favourites have stayed put, like their steak-frites, lemon brûlée tart and their infamous house burger topped with smoked bacon, caramelized onion and "secret sauce."

Typically when people think bistro, they assume traditional, old-school styles of cooking. However, the chefs over at Absinthe has brought their dishes to a new level, since their relocation. Consider their cooked quail: the meat is marinated to the flavours of Korean bulgogi (what?!) and even slightly fried the Korean way, sided with green apples and spicy kimchi. It's then prettily garnished with edible flowers and licorice mint. Talk about inventive. It's not uncommon for restaurants in Ottawa to grab inspiration from a particular, traditional cuisine and somehow adding to it to make it their own. Town embodies this cooking style stylishly with Italian eats-- you can find menu items like barbecued octopus, lamb bolognese and ricotta-stuffed meatballs with polenta. Chef-owner Marc Doiron recreates these classic Mediterranean and central Italy dishes without desperately trying to recreate a replica of these Italian foods. People love creativity! If you love charcuterie, Meat Press has got you. This special restaurant is tucked away on a side street in Hintonburg in Ottawa and the chef-owner Étienne Cuerrier has a knack for curing locally-sourced meats into delicious foods like blood sausage and terrine.

Their sandwiches are absolutely mouthwatering and juicy. The sandwiches are made with either charcuterie meats or smoked meats and they don't go light on the toppings! This restaurant is affordable and a pretty popular place. There is a friendly neighbourhood grocery store claims they have "the best sandwiches in Ottawa," and they probably deserve that title. The secret to Di Rienzo's delicious sandwiches is simplicity along with not creating a dent in your wallet.

At super low prices, Di Rienzo whips up simple yet satisfying Italian sandwiches like mortadella and prosciutto subs (like the ones they typically serve at corner shops in Italy!). I don't know what it is about modestly picking up a sandwich from a corner spot, maybe it's nostalgia in our whirlwind of a city, but the simplicity is really intriguing. Make sure you grab a creamy cannoli on your way out! Some chefs prefer to let the ingredients speak for themselves (simple fresh tomato and mozza, broiled lobster, etc) but Arup Jana, chef and owner of Allium, prefers to add a bit of his personality. Although the menu quite seasonal, Jana still manages to impose some of his character into his dishes, clearly discontent with letting seasonal fresh veggies speak for themselves. At this restaurant, you'll notice alot of beautifully adorned plates with interesting ingredients like pepitas, farro, summer peas, mint and an assortment of colourful purées.

If you're adventurous, you can try ordering the restaurant's "blind" dishes which include one starter and one main, but you won't know what you get until it arrives at your table. Make sure you call beforehand to make a reservation if you decide to go here! This bistro is the definition of a hidden gem. First off, the place is windowless and kind of rugged-looking as it hasn't really updated its scene in the last 18 years... nonetheless, Benny’s serves up some of the most refined and interesting French bistro plates in Ottawa. Believe it-- don't judge a book by its cover! It should be noted that you probably won't find other bakeries like this in North America as most of Benny's staff is from France, a typical French boulangerie.

Chef/owner and culinary teacher Scott Adams is notorious for whipping up ordinary dishes with slight twists. For example, a salad is a salad, right? Nope. Adams creates salad plates that unite ingredients like Norwegian krumkakes (krumake is a mildly flavorful and crispy wafer-like cookie) with mushrooms, cheddar dumplings and preserved, sweet lemon crème fraîche. There's always a daily sandwich, salad and soup that is absolutely delectable to the palette at this hidden spot... and don't forget their mignon French desserts! This unique restobar doesn't actually have a full kitchen... the chef-owner makes do with a panini press, smoker, popcorn maker, quaint oven, on-site garden and obviously, a cool blowtorch. They serve cool snack-bites like bacon-wrapped olives to pair with an intriguing cocktail, with its boozy and loungey bar vibe as the backdrop. The ceilings are draped with linen to make it an even cozier and underlit spot. Coconut Lagoon is devoted to serving its beloved Indian-food lovers with authentic Kerala cuisine and cooking methods. They renovated their restaurant in 2017 following a silver medal award at the 2017 Canadian Culinary Championships, making way for a bigger and bolder scene. Their menu focuses on South Indian food like Travancore fish curry, Kovalam lobster, Tandoori-spiced lamb chops and Curry-leaf crab cakes, with a beer and wine list carefully selected to match the spices. Supply and Demand definitely radiate 'cool vibes' from its ornate light fixtures and mosaic tiled floors in the Westboro neighbourhood of Ottawa. They have a stylish and modern raw bar, fresh hand-made pasta and well-cured meats. Their pasta is so good that chef/owner Steve Wall introduced 'pasta classes' where guests can enjoy a night of cooking, drinking, eating and socializing. You will learn how to prepare two styles of noodles and Steve will personally teach you proper techniques. Click here for more info.

Their menu is full of light and fresh raw bar dishes and fresh veggie-focused plates. This is a great combo to their exceptional hand-made pasta. Their menu changes pretty often in accordance to what's available by local farmers--it feels so good to eat local, doesn't it? This new and hot restaurant on Wellington Street West is an eclectic and upscale restobar built on a passion for food and modern cooking methods. They aim to produce a comfortable and evocative culinary experience for all their guests.

Jason Sawison, who is the former chef at Ottawa's celebrated Atelier restaurant, is behind this classy place. You can't go wrong with sharing their two-tier seafood platter filled with prawns, oysters, mini seafood burgers, scallops and tuna-- it even has a subtle Korean flavour to it! This snazzy, sexy rooftop restobar is located in Andaz Ottawa, a luxury boutique hotel in the Byward Market. It is located way up on the 16th floor of the Andaz and they serve creative boozy cocktails along with a panoramic view of the city. They include a snack menu with bar bites like an extravagant avocado toast, charcuterie board with various cheeses, tacos, ahi tuna and fried chicken. There’s a snack menu with small bites, not full meals, so head here for pre-or-post dinner drinks. Takes reservations. It shouldn't come as a total surprise that the food scene in Ottawa has really boomed over the past couple of years, moving waaaaay beyond poutine and Beavertails, although you should still save some room for that, too. From convenience store Italian sandwiches to complete fine-dining 5-course meals, this list should give you a good idea of where to eat next.

Four cats have been found dead this month.

Ottawa police report that they are investigating the deaths of four cats in the city's west end.

If you are craving some adventure, we got you covered. There are so many fun activities to do near Ottawa that you'll want to try for yourself.

Now that Ontario's border restrictions are over, you can finally treat yourself to a relaxing day at Nordic Spa-Nature or trying to find your way out of an epic water maze.