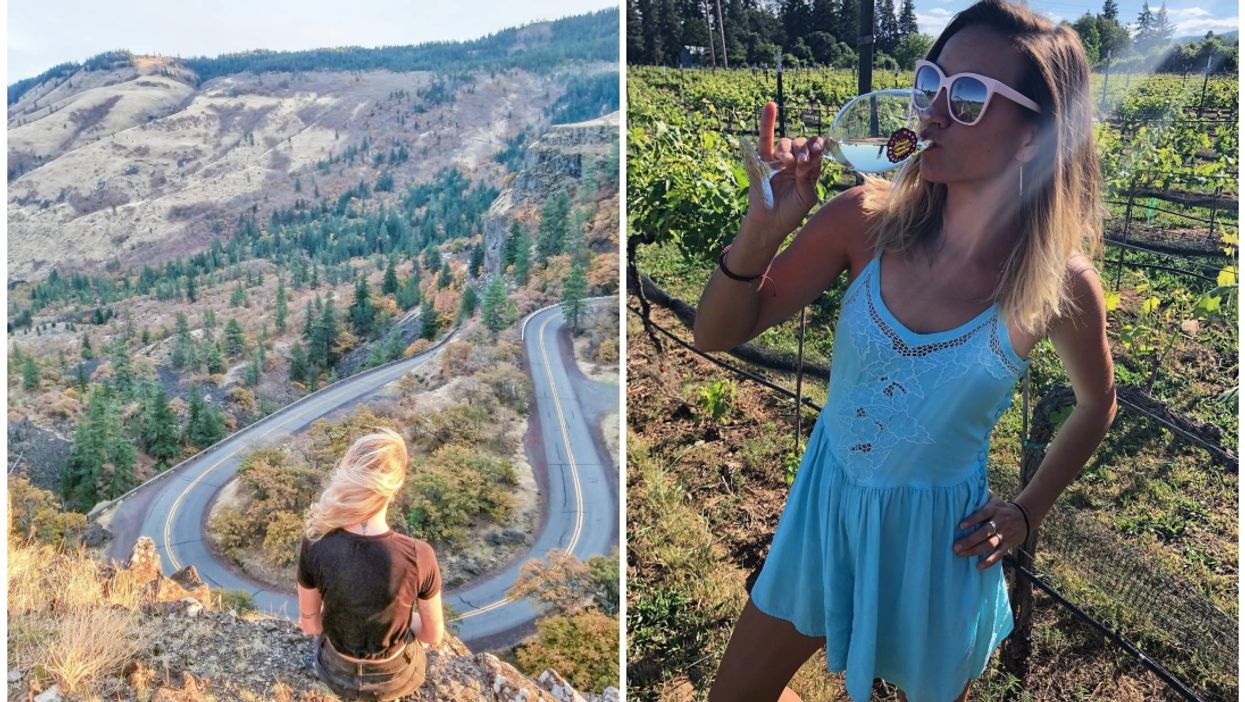 The Northwest can be a paradise, deserving of every #PNWwonderland hashtag that's ever been typed into a smartphone, but there are some winter days that make us take one look at the weather outside and want to sleep until spring.

It can be daunting to try to make the most of the small hours of daylight we see this time of year, but the best way to beat the winter blues is to embrace the season and venture outside to explore! Portland is just a short drive from some of the greatest natural beauty in the United States, and in the time it takes to listen to a podcast, you can be in an entirely new environment, embarking on a winter adventure!

Whether you want to bundle up for a crisp hike through a forest, sneak behind a waterfall and peak out through its crystal curtain, or get naked with strangers in the woods, we have some ideas to help you keep things weird this winter! This hot springs and conference center will get you feeling refreshed and ready to take on the new year with a clear mind! Enjoy a scenic drive from Portland to escape the mainstream and indulge in a retreat for your mind and body.

This place means it when they say they want you to unplug. There is no cell phone service, no wifi, and you aren't even allowed phone access at the center unless it's an emergency. Drugs and alcohol are not permitted on the grounds, but nudity is! Clothing is optional for soaking in the hot springs--inviting guests to relax and feel comfortable in raw nature with their raw, natural selves.

Time from Portland: About 1.75 hours The Timberline Lodge has one of the most storied histories of any place you could visit in Oregon. It was built during the Great Depression, and it gained fame for being featured in the movie The Shining.

Over two million visitors come here each year to ski and see the if it's as haunted as it looks in the film. Most people seem to find it a charming and quaint lodge, as opposed to the terrifying portal to hell portrayed in the movie, but you can come to visit and judge for yourself! Hiking to Tamanawas Falls in the winter can lead to some especially breathtaking views.

The forest glistens with an icy chill, and as long as you come prepared with enough layers you should be ready to enjoy in comfort!

Multnomah Falls is one of the most stunning waterfalls in the state, and it's easily accessed, even in the winter. Stop here to breathe in some winter cool and appreciate the natural beauty of the area. If you're visiting Multnomah falls and you'd like to expand your visit, explore The Columbia River Gorge National Scenic Area. This destination showcases the beauty of one of Oregon's true gems and allows visitors to see a variety of notable nature sights.

Hit the slopes at this popular ski resort that spans over 2,000 acres. Grab a cabin or local Airbnb for the night if you'd like to make it a staycation, or just have a fun day at the mountain. Nothing can warm up a NW winter like a glass of fabulous local wine! After 20 years of importing Italian wine to the US, Franco Marchesi recognized the similarity in Oregon's terrain to that of Italy and used similar techniques to create wine in the northwest. Come to Marchesi to taste the Italian influence in this Hood River wine! To be fair, "downtown Hood River" doesn't exactly describe the bustling downtown of a city, but that's probably not what you're looking for anyway if you live Portland! Hood River is one of the most charming cities in the state, and it's quaint "downtown" area can be incredibly charming, even in the winter. Hood River is known not just for its summer and winter sports, but also for its local wine and beer. Downtown is home to some pretty awesome breweries and tasting rooms, including Naked Winery, which has its tasting room just off the main strip, and the new trending Ferment Brewery. While you're at Naked Winery, you might want to grab a few bottles from their Outdoor Vino line, which is packaged in BPA-free plastic with screw caps and designed for lightweight and unbreakable carry to outdoor activities like winter hikes on Mt. Hood!

This gorgeous, easy hike is perfect the winter! Bundle up for a nature adventure to what's been called Oregon's "mini Niagara," where you can enjoy an in-and-out, short hike after a scenic drive from Portland. The hike is less than two-mile each way, so you can be cozy and back in your car in no time.

However, if you do find yourself chilly once you get to the falls, you can always warm back up with a quick yoga routine, as our Instagrammer friend above did! If you want to explore a new city for the day, the coastal town of Cannon Beach is a charming place to visit. Take a peaceful winter stroll down the beach, explore the wetlands, and discover powerful art at one of their various galleries.

If you're feeling ambitious, you can even sign up for a cooking class at EVOO Cooking School to take while you're there.

Time from Portland: About 1.25 This bridge was built in 1963 to help some of the community's smallest members: squirrels. A kind-hearted architect named Amos Peters built this 60-foot bridge to allow squirrels and other small animals to safely cross the road without getting squished by oncoming traffic en route.

In honor the bridge's big-hearted creator, there is a giant squirrel statue for animal-lovers to snap selfies.

Time from Portland: About 2.75 hours If you're in the mood for a longer drive and bolder destination, visiting Mt. Rainier National Park is a bucket list option that you could nock out in a day. If you leave early enough in the morning, you can spend most of the daylight hours playing outside in this national treasure and enjoying the serenity of the mountains. This museum is home to The Spruce Goose, the largest wooden airplane ever built, created by none other than Howard Hughes himself — you know, Leo played him in the movie.

Take yourself on an adult field trip to learn about the fascinating past of aviation and how it led to open doors in space travel and deepen your understanding of what we might expect from either industry in years to come.

It's been called the "crown jewel" of Oregon State Parks System. When you visit this waterfall, you can do more than just look at it — you can actually walk behind this 177-foot curtain of water.

This unique 125-foot tall column is one of the most visited attractions in Oregon. It's a standing piece of artwork modeled after Rome's Trajan Column, but once you get to the top, the views are pure PNW Wonderland. While there is an estimated population of 10,000 people in Astoria, it's estimated that 400,000 people visit the tower each year.

This viewpoint is one of the most photographed places in Oregon. Bring a friend to take an over-the-shoulder photo as you look out over the wild world around you.

See where the explorers Lewis and Clark based their camp while they were exploring this part of the US. Some remnants of their camp still remain, and some have been rebuilt and preserved to allow visitors to learn about this momentous exploration. Winter is "cellar season" for wineries, which is a perfect time to come in for a tasting! The weather report may be filled with rain and snow, the barrels are still filled with wine!

Taste through the year's best barrels and take home a few bottles to keep you warm for the winter!

Trillium Lake at Mt. Hood is a pristine sight any time of year. On a cold, clear day, the mountain looks otherworldly towering over the water, and its reflection can cast some stunning images fro photos.

Sometimes it really is all about the journey, and this trip is a blazing testament to that. The Washington County Loop is one of the most scenic drives you can take, and it's stunning any time of the year. Turning around the Forest Grove snaps this otherwise much longer drive into a bite-sized daytime with limited distance but much to see along the way. A logical turnaround point is the wine country there, where you can enjoy a leisurely lunch before heading back.

If you want a souvenir from your trip that's not from the wine vineyards, stop by SakéOne in Forest Grove for a tasting at one of only six saké producers in the US.

This drive weaves through rural orchards, sprawling country, and rugged farmland. The variety captures the raw, dynamic beauty of the area, and will offer new reasons to appreciate the true wonderland that is the PNW.