Activists are standing their ground despite growing tension and -24 C temperatures. 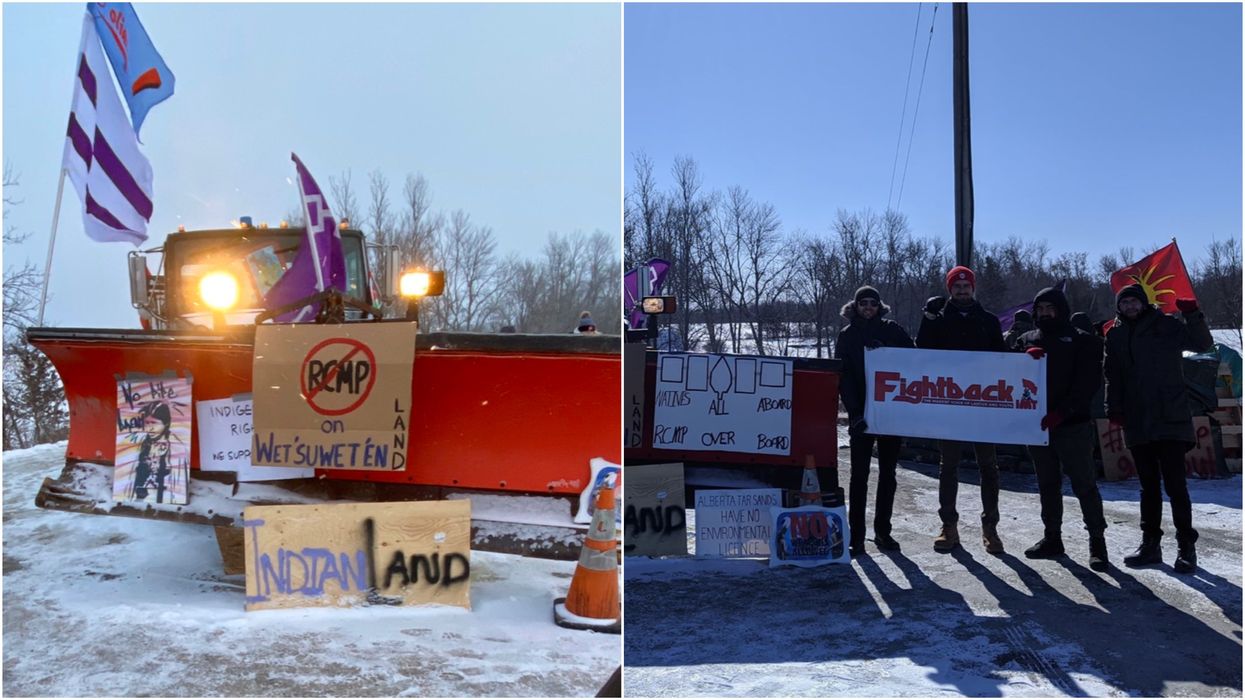 Activists stationed at the Belleville rail crossing have now been protesting at the site for over a week. In the last 24 hours, the railway blockades across Canada have caused a number of cross-country rail operators to suspend their services. Yet, despite growing tensions and -24 C weather conditions, pipeline protestors have confirmed that they’re “not going anywhere.”

As major Canadian rail services continue to get suspended and shut down, activists protesting in Tyendinaga Township have made it clear that they’re more than prepared to stand their ground.

A report from Global News explains that while the Tyendinaga protest started small, it has grown into a “full-fledged camp” that is now home to many tents, camper vans and vehicles.

Speaking to the Global on the eighth day of protests, Jocelyn Wabano-Iahtail, an Indigenous activist from Attawapiskat First Nation, explained that their actions were no longer simply part of a pipeline dispute.

“My people did not invade Europe,” Wabano-Iahtail said. “We’re home and we’re not going anywhere.”

It’s colder than this in Tyendinaga and the Mohawks show no signs of leaving, an indication of their resolve, the i… https://t.co/xE3ii5SlR5
— Sarah Leavitt (@Sarah Leavitt)1581679171.0

Wabano-Iahtail’s comments come as temperatures in Belleville have dropped to -17 C. Friday morning’s conditions were even colder, as the wind chill brought it down to -23.

In a statement on Tuesday, the Tyendinaga Mohawk Council noted that while they did not prompt the Wet'suwet'en solidarity protest, they were supporting the cause.

“We take this moment to encourage all Onkwehón:we to use their voices and good minds to bring awareness to matters affecting Indigenous people across all Nations,” the message read.

While the Belleville blockade originally disrupted rail services between Montreal and Toronto, and Ottawa and Toronto, VIA Rail has now cancelled almost all of its services in the area.

On Thursday, images started circulating of the eerily quiet VIA rail stations across Ontario.

Although the Tyendinaga Township protestors have been delivered an injunction by the Ontario Provincial Police, no action has been taken to remove them from the site.

Fightback in solidarity with Tyendinaga camp at CN rail line. On our way to Montreal Marxist Winter School to discu… https://t.co/MZtsJL8SjU
— Fightback (@Fightback)1581703577.0

The local protest, which is located just metres from Mohawk territory, started last week, when the RCMP arrested Wet’suwet’en protestors in B.C.

On Thursday, several people were arrested for refusing to evacuate the Coastal Gaslink pipeline construction site, according to Global News.

The Indigenous nation has been opposing the pipeline since last year. Wet’suwet’en hereditary chiefs have not given their consent to the construction, and have accused the company of violating their traditional laws.

A father and son walk back to the south side of CN Rail tracks in Tyendinaga on Thursday night. They came across to… https://t.co/AHuySopiQC
— Pete Fisher (@Pete Fisher)1581648265.0

In their recent statement, the Tyendinaga Mohawk Council said, “We wish the Wet’suwet’en people strength in these difficult times and hope all sides involved in this dispute find a peaceful resolution to the issues they are dealing with.”