The rainbow poppies are being dubbed as "LGBTQ+ poppies". 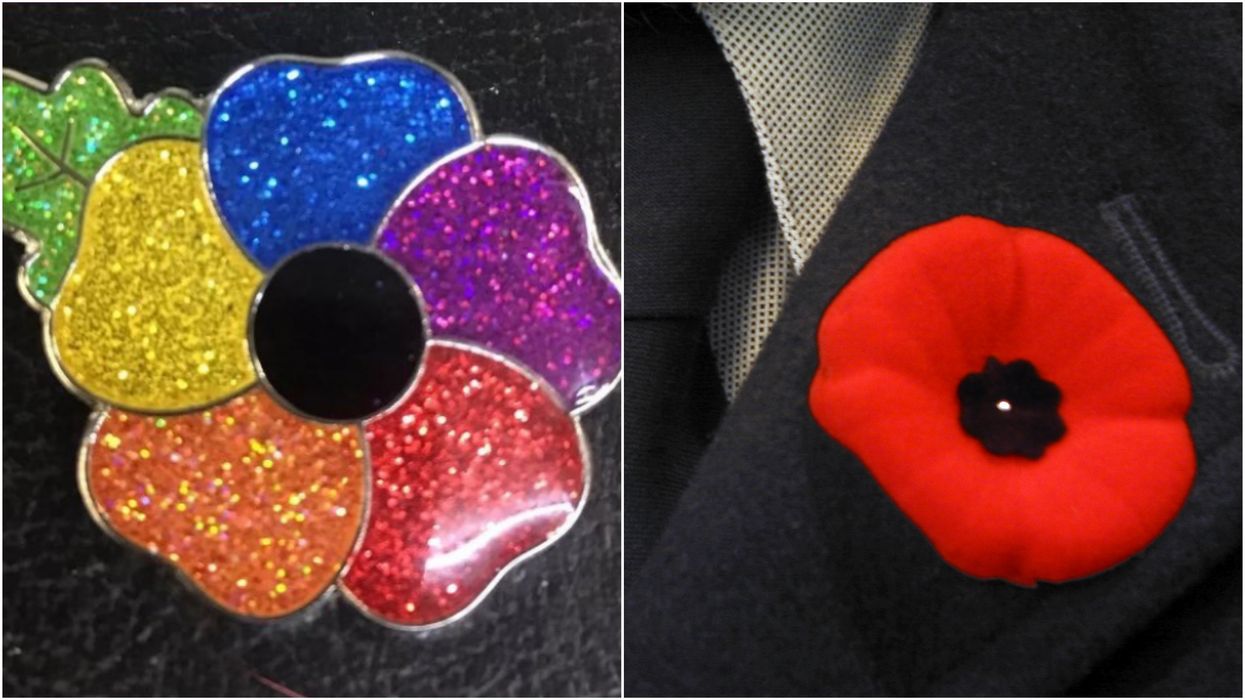 Across Canada, November 11 is marked as Remembrance Day, a day to commemorate the great sacrifices made by those who have fought and died for the country. From early November, traditional red poppies can be seen worn on clothing, as a mark of respect for those who gave up so much. However, images of a different poppy have started circulating online this year, and the Rainbow Poppies in Canada are causing a huge online debate.

While the traditional poppy worn in Canada is red in colour, many variations of the badge have been introduced over the years. There’s a white poppy to symbolize peace, a purple poppy to remember the animals that have served in the war, and a black poppy to commemorate black, African and Caribbean communities' contribution to the war effort.

However, the poppy that has arguably made the most waves online is the "rainbow poppy", a multi-coloured poppy that allegedly has the intention of honouring fallen soldiers of the LGBT community during armed conflict.

Despite the fact that the poppy is not available to buy in Canada, and was only being sold on one, singular eBay site in the U.K., the multi-coloured badge has caused a pretty big debate here, with critics suggesting that the bright variation "disrespects" fallen soldiers.

Earlier this week, one news report suggested that two students from a Manitoba high school were suspended for refusing to follow their choir teacher’s demand to wear the rainbow-coloured poppy.

However, this story was later revealed to be false, after the local school board released a statement confirming that no student in their district has been ordered to wear the seemingly controversial poppy.

The “LGBT poppy” that is causing huge debates in Canada actually comes from the U.K. and was previously listed on one eBay site from just one seller. According to The Metro, the seller was simply auctioning the glittery badges to raise money for charity. It has since been removed.

Despite there being no sign of any other rainbow badges sold in Canada or on other online stores,  the poppy soon sparked fury on social media as some accused the wider LGBTQ+ community of disrespecting the poppy ahead of Remembrance Day.

In a Reddit thread dedicated to the colourful poppy, one Canadian wrote, “The poppy is shown out of respect to ALL soldiers, whether they are “lgbt+” or not. I refuse to even acknowledge this rainbow poppy BS. It’s just plan disrespectful.”

Another shared a similar opinion, writing, “‘All veterans are special but some more than others.’ I miss the days when [homosexual people] just wanted to be accepted.”

A Third wrote on Twitter, “What the hell, LGBTQ community?! The poppy was red to resemble the blood that the soldiers lost, fighting for their country! Stop thinking that you're better than them …”

While the rainbow poppy clearly upset a number of Canadians, there were also many, many people who were confused by the outrage the poppy had caused here, particularly as it’s not widely available to purchase.

One Twitter user wrote, “I have never seen a “rainbow poppy” or heard of it until people posted about how it’s disrespectful; I tried to research it and could not find one article relating to Canada. I swear some people just want shit to be mad about.”

Another said, “In case anyone was wondering yall need to chill with the anger surrounding the Rainbow Poppy and start getting angry about the fact that literally almost all of the vets in Canada are homeless and starving."

Incase anyone was wondering yall need to chill with the anger surrouding the Rainbow Poppy and start getting angry… https://t.co/R3DO1BlN5f
— Madi (@Madi)1573097935.0

The Royal British Legion (RBL) confirmed the rainbow badge being sold is not an official poppy, and it has not been officially connected to any LGBT charities or communities. In fact, some people even debate whether this "poppy" is even a poppy at all.

While some people seem pretty outraged about this online, the badges aren’t even for sale in Canada, so the chances of you coming across a rainbow-coloured poppy this weekend are very, very slim indeed.

'Hundreds' of bodies were discovered at a former Saskatchewan residential school.

Justin Trudeau has responded to the news that 751 unmarked graves were found at the site of the former Marieval Indian Residential School in Saskatchewan.

There are a lot of things to be excited about next week, with the province moving into step two. However, Ontario's weather forecast just might ruin your plans.

According to the Weather Network, heavy rain and thunderstorms will wreak havoc on cottage country this week with "more than a month's worth of rain" expected to hit over the next seven days.