Someone is getting coal for Christmas. 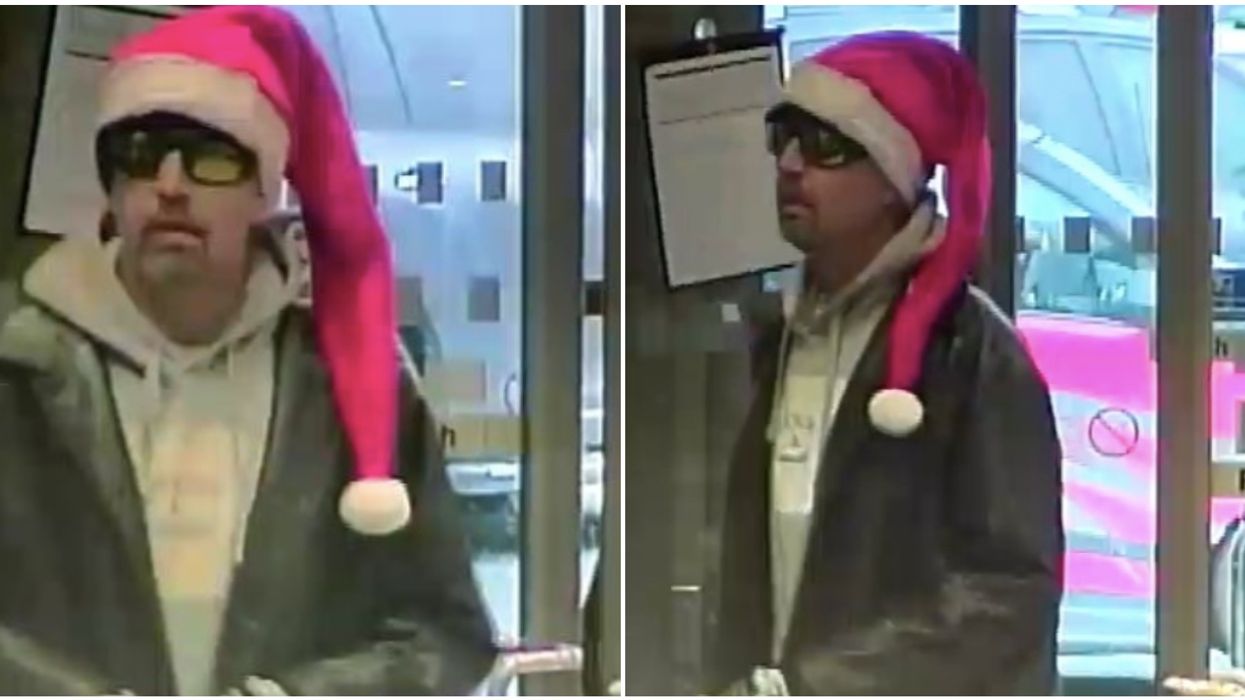 It looks like everyone is getting into the spirit fo the holiday season; even the criminals. Nanaimo RCMP are looking for a man in a Santa hat in B.C. who robbed a bank just a few days before Christmas. In case you don’t believe us we have the pictures to prove it and they are just as funny as you think.

According to the Nanaimo RCMP, a man robbed a local BMO bank on December 23, also known as Christmas Eve Eve.

At around 2:10 p.m. the man walked into the bank wearing a Santa hat, sunglasses, a leather jacket, and a hoodie, making it arguably one of the most festive robberies ever.

According to the Times Colonist, the unknown man walked straight up to the teller at the Bank of Montreal at the Terminal Park Mall and demanded cash. He allegedly had a weapon. However, police have not confirmed this with Narcity.

Despite his looks, this Christmas robber was no jolly Saint Nick and was there for cash. We're starting to think that he's not actually the real Santa at all.

The suspect was able to pull off their grand heist. However, the RCMP have not disclosed how much money he actually got away with.

This man is probably on the naughty list after this stunt.

Following the robbery, the man discarded his clever disguise, including his Santa hat, sunglasses, leather jacket and gloves.

Gary O’Brien with the Nanaimo RCMP told the Times Colonist that all the discarded items were seized by officers.

Along with the obviously festive attire, the man was also wearing a Crooks and Castles hoodie.

RCMP have stated that the man has a brown and grey goatee and is about five foot, eight inches tall.

According to a tweet released by the police force, the white male was in his 40s or 50s and had a medium build.

RCMP are now asking the public to keep an eye out for the suspect.

'Tis the season for Santa-related crimes.

According to the Vancouver Transit Police, Santa and Rudoph actually got pulled over while riding a motorcycle because they didn't use their signal lights.

While it was a funny sight, it is hardly the only weird police encounter this year

In March of this year, a serial thief was caught hiding in ceilings overnight to steal from stores. The B.C. man would literally find his way into ceilings during store hours and hide in there for hours on end before making his move.

Even the Saskatoon police have had weird calls this year. In May, a 15-year-old successfully evaded police by swimming across the river.

The hilarious (and honestly impressive) part is that the teen was handcuffed the entire time.