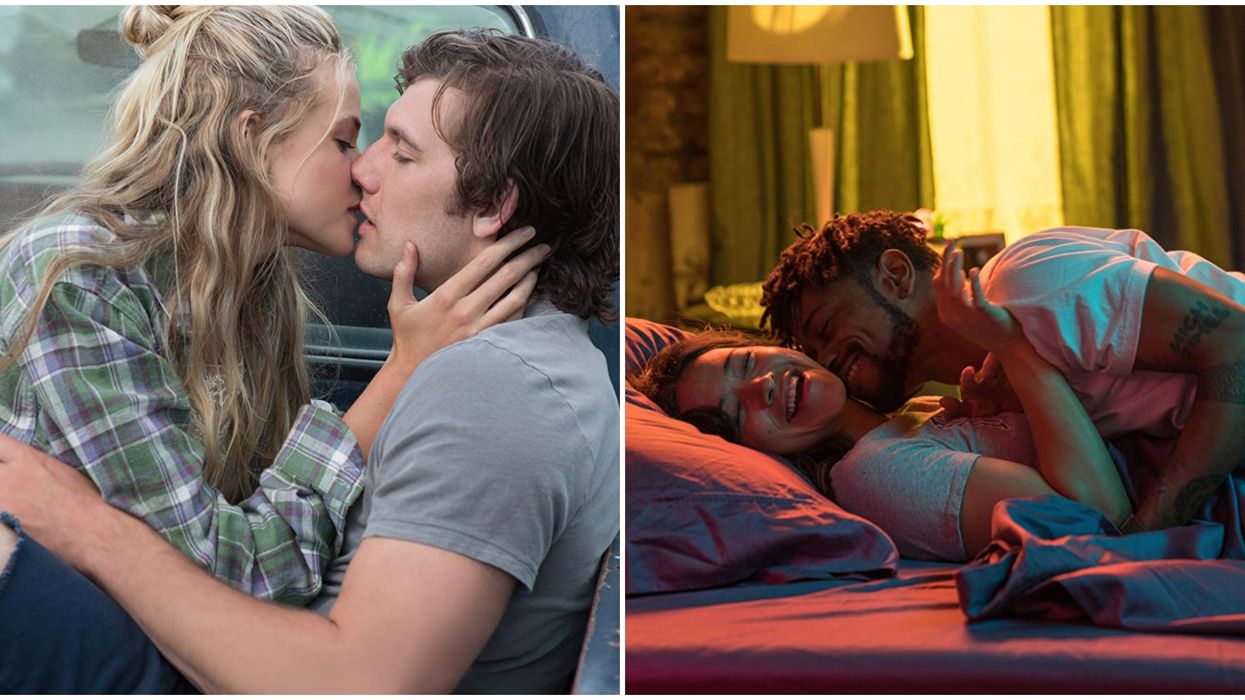 As February begins to fly by, Valentine's Day is right around the corner. If you're in a relationship, you and your significant other may have reservations at your favourite restaurant or plans for a romantic evening together. If you're single, however, you may be wondering what you should be doing on February 14. Luckily for you, there's an awesome selection of romance movies on Netflix that will have you feeling the love.

Over the years, Netflix has created some legendary romantic comedies of their own, including To All the Boys I've Loved Before and The Perfect Date (thanks, Noah Centineo). On top of that, the streaming service is also loaded with some older classics that will give you major nostalgia.

No matter if you're spending V-Day watching your favourite movies all by yourself, bingeing with your BFFs, or snuggled up with your boo, you have no shortage of films to choose from—all you need to do is pick where you want to start conquering this awesome list.

You've Got Mail stars Tom Hanks and Meg Ryan as two bookstore owners who, after meeting online, fall in love. Little do they know though, they're actually business rivals.

P.S. I Love You tells the story of a woman who receives letters from her late husband after his passing, making life without him feel slightly more bearable.

Eat Pray Love stars Julia Roberts as a recently divorced woman whose world has come crumbling down. In hopes of finding herself, she heads out on a journey across the world.

Jennifer Lopez plays the role of Charlotte in Monster in Law, a woman who has finally found the man of her dreams. When she thinks things can't get any better, his mother comes along to ruin the relationship.

Titanic is a forbidden love story of sorts about an aristocratic girl and a young artist who find themselves falling for one another aboard the Titanic.

To All the Boys I've Loved Before follows teen Lara Jean Covey as she navigates her feelings after love letters she's written over the years are mailed out to her former crushes.

Someone Great is a Netflix original about a New York City girl who, after going through a break-up with her long-term boyfriend, gears up to move across the country. Before she goes though, she plans one last wild night out with her BFFs.

50 First Dates stars Adam Sandler as Henry, a man who falls in love with a woman named Lucy who struggles with short-term memory loss. Because of this, he must spend every day winning her over in hopes that she'll fall in love again.

Made of Honor is about two best friends from college. When one of them gets engaged, the other realizes that he's in love with her and resolves to win her over before she ties the knot.

The DUFF is about a high school senior named Bianca who turns to the hottest guy in school for advice on how she can fit in with the popular crowd.

The musical classic Mamma Mia! tells the story of Sophie, a young girl preparing for her wedding. After spending her whole life without a father, she invites three of her mother's former suitors to the event, hoping to figure out which one is her dad.

Stuck in Love is a heartwarming tale of a man who's been struggling since his wife left him. With the help of his teenage children, he and his family come to understand the complexities of love.

The Age of Adaline

The Age of Adaline stars Blake Lively as a woman who stopped ageing after a mysterious accident, causing her to have to run from those she loves the most to keep her secret. When she meets a man, Adaline finds herself wanting to stay in one place for longer than usual.

Of all the love movies on this list, La La Land just may be the most realistic. The film tells the story of a couple who's drawn together by their passion, which ironically enough, also happens to be the thing that tears them apart.

Irreplaceable You is a Netflix original about Abbie, a woman recently diagnosed with cancer. As she comes to terms with the heartbreaking news, Abbie makes it her mission to find a new partner for her fiancé, Sam.

He's Just Not That Into You follows the lives of four men and five women in Baltimore as they navigate the complexities of adult love and relationships.

Endless Love is a movie about a young girl who, after spending her high school years in recluse, opens up to a former classmate named David. The two fall head over heels quickly, spending the summer of a lifetime together.

The Other Boleyn Girl

The Other Boleyn Girl will take you back in time to the court of Henry VIII. As two sisters battle it out for a place in the king's heart (and his bed), things become rather messy.

Always Be My Maybe hit Netflix back in 2019 and tells the story of former childhood best friends who, after being separated through most of their adult life, find themselves rekindling a spark that they'd always denied.

Life As We Know It

Starring Katherine Heigl and Josh Duhamel, Life As We Know It is about Eric and Holly, who hate one another after going on a date. When their lives are turned upside down, they find themselves co-parenting their friend's orphaned baby.

Christina Milian stars in Falling Inn Love in the role of a woman who heads to New Zealand after winning an inn online. While abroad, she finds herself catching feelings for a handsome local.

Safe Haven stars Julianne Hough as a woman who moves to North Carolina. Shortly after arriving, she falls in love with a widowed store owner. Things are going wonderfully until her dark past begins to follow her, that is.

The Last Summer is a Netflix Original about a group of high school graduates embarking on their last months together before heading off to college.

The Shape of Water

The Shape of Water tells the story of a lonely janitor named Elisa who befriends an amphibious creature that's being held captive in the secret research facility that she cleans.

Friends with Benefits stars Justin Timberlake and Mila Kunis as coworkers who become friends, who later become sexual partners. Once they begin hooking up though, their friendship becomes increasingly complicated.

Letters to Juliet is about an aspiring writer named Sophie whose goal is to reunite a woman named Claire with her lover. Along the way, Sophie finds herself falling for Claire's grandson, embarking on a relationship of her own.

2004's The Prince and Me is a love story about two college students who, after some disagreements, find themselves in love. Just when everything seems perfect, Paige finds out that her boyfriend is actually Crown Prince Edvard, suddenly complicating their relationship.

Blue Crush is a surfer film about Anne Marie, who's preparing for a major competition called the Pipe Masters. As the event nears closer, Anne finds herself distracted by a handsome football player named Matt.

The 1997 film My Best Friend's Wedding stars Julia Roberts as Julianne, who's suddenly shocked when she finds out that her best friend Michael is getting married. As he gets closer to tying the knot, Julianne decides to sabotage his wedding and profess her love for him.

Netflix's Set It Up is about two young assistants that come up with a plan to set their bosses up with one another in hopes of lightening their workload and making life around the office a bit more pleasant.

The Ugly Truth follows coworkers Abby and Mike as they strike a unique deal. Because Abby thinks Mike is a total chauvinist, he wants to prove to her that there's some validity to his relationship theories.

Naomi and Ely's No Kiss List is about two best friends whose relationship is tested when they both end up falling for the same guy.

Starring Zac Efron, The Lucky One is about a Marine who just returned from the Iraq war. When he returns home, he begins his search for a woman who he believes to be his lucky charm that kept him alive while away.

Just Go With It

Just Go With It stars Adam Sandler as a plastic surgeon who convinces his assistant to join him on a trip to Hawaii. The catch is that he wants her to pretend to be his ex-wife to cover up a lie he told his young girlfriend.

Nights in Rodanthe is a story about two very unhappy people whose lives suddenly become entwined when they stay at the same inn. Before you know it, they've fallen in love and their perspectives on life have changed.

The Perfect Date stars Noah Centineo as a high school student who creates an app that allows girls to rent him out as a customized date in order for him to save money for college.

Love, Rosie is a film about two childhood friends who always denied that they'd make a great couple. As life takes them apart though, they start to realize that they are, in fact, meant to be.

Netflix's Candy Jar is about an introverted high school student who finds herself falling in love with her nemesis as she begins to realize that they have more in common than she initially thought.

Definitely, Maybe stars Canadian Ryan Reynolds as a father going through a divorce. His young daughter begins asking him questions about life before her, causing him to look back on past loves.