The friendly feud between the stars continues. 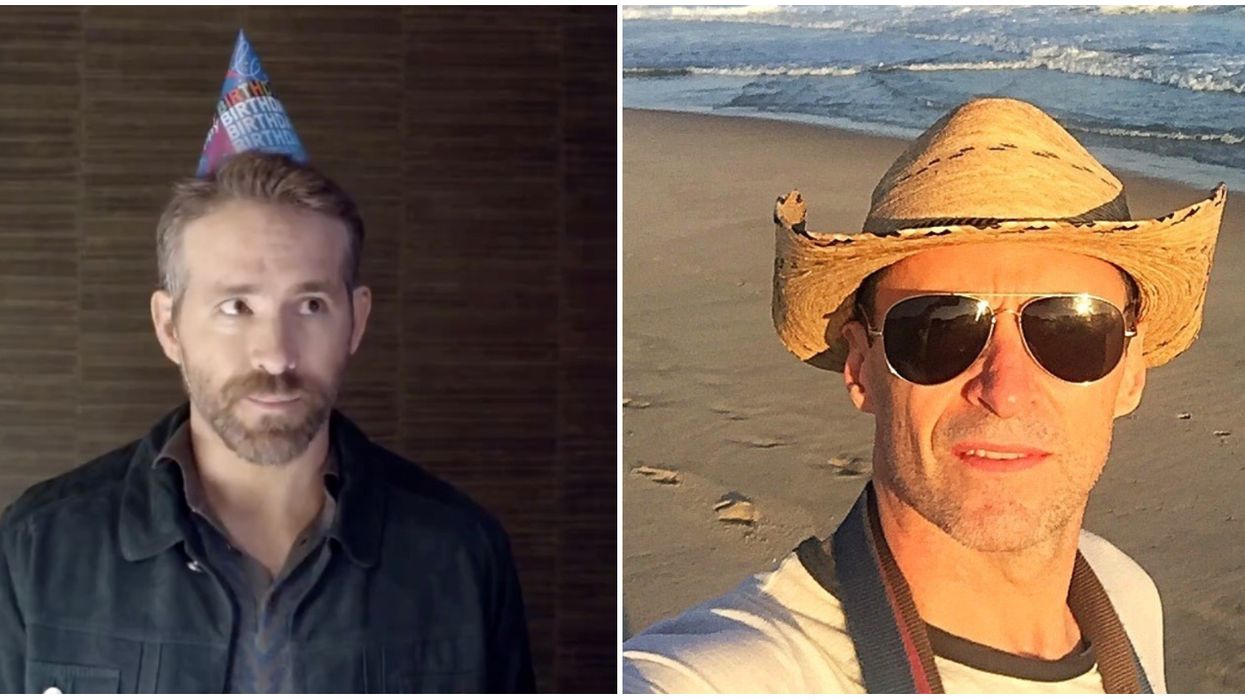 Ryan Reynolds and Hugh Jackman have a very special friendship. Not only have the two actors played X-Men characters opposite each other (in a film that both of them would probably like people to forget), but they also enjoy hanging out together in real life. That is, of course, while they're not publicly mocking each other.

Hugh Jackman was celebrating his 51st birthday on October 12, and Ryan Reynolds decided to send him a very special (and angry) birthday video.

This came after Reynolds' first birthday message: a photo of him and Jackman together, with a cake emoji plastered over Jackman's face. Reynolds shared the image in an Instagram story, writing, "Happy Birthday @thehughjackman!!!!"

Jackman also shared the post in his own Instagram story, adding a gif of Judge Judy rolling her eyes over Reynolds' face.

Ryan Reynolds took it one step further after Jackman called him out during a live performance. After singing and playing drums for a medley of classic rock songs, Jackman said, "Let's see Ryan Reynolds do that."

Reynolds sent a video of himself in a party hat, speaking directly to Jackman. "I was just going to wish you happy birthday," Reynolds says in the video, which Jackman posted on his social media. "Then I saw what you said… In a word, hurtful. Yeah. Enjoy the show, Hugh Jackman."

Reynolds then sings a very nice rendition of "Happy Birthday" to Jackman. Of course, it couldn't all be nice, as Reynolds immediately yelled after singing, "And I’m not even f***ing professionally-trained, Jackman, you piece of s*** motherf**er!"

Jackman shared the video on his Twitter feed, writing, "At first I thought - Ugh, now I actually have to apologize. But then ..."

Hugh Jackman and Ryan Reynolds may be friends, but they are the kind of friends who enjoy mocking each other in the public eye.

When Jackman received the Order of Australia, Reynolds wrote on Instagram, "Receiving the Order of Australia is a HUGE deal. And despite what I tell anyone who’ll listen, Hugh Jackman is one of the finest, kindest, hardest working, generous and most talented people I’ve had the privilege to call my friend. There’s nobody better. None of this changes the unfortunate fact he’s a complete bastard."

Similarly, Jackman took a shot at Reynolds when a truck advertising Aviation Gin, Reynolds' own company, was being towed. "Couldn’t have happened to a nicer guy," Jackman wrote.

There was also the time when Jackman and Jake Gyllenhaal convinced Reynolds to wear an ugly sweater to a Christmas Party (it was not ugly-sweater themed).