The best things to do in San Antonio this winter. 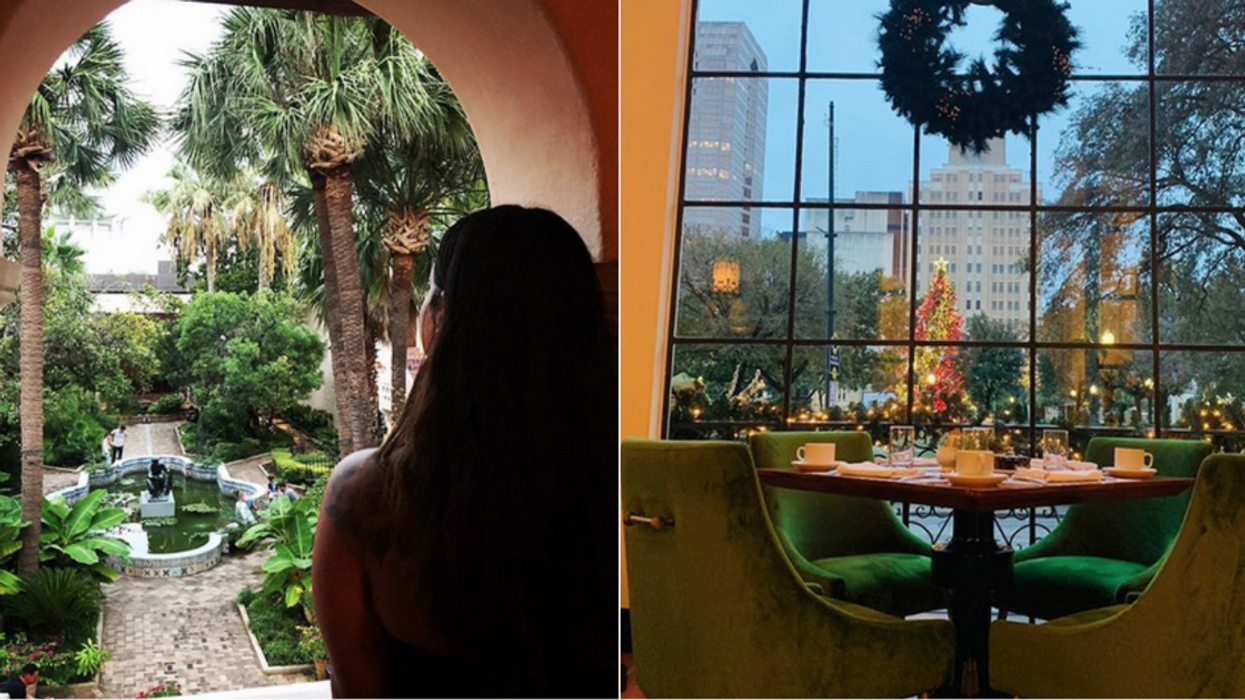 No matter how many holiday lights have decked the halls, the chill of the winter season can still sometimes be a call for one too many #NetflixAndChill nights. It’s okay; we’ve all been there on the couch.

But, good thing for you and your GF, there are plenty of other ways to make the season merry and bright that don’t involve bingeing on “The Great British Baking Show.”

Bae will be head-over-heels for these 32 secret-ish places that you might not have heard of or thought of, where the vibe is chill, the scene is hot — and the charm is so real, especially in the wintertime.

With this cool list, you’ll be impressing your GF in no time flat — all season long — whether you’re early in the dating game or full-on #couplegoals. Of course, we can’t forget it’s cuffing season, too. So, you’re welcome — for all the first-date ideas that might just get you coupled up faster than you think. Tucked away inside Craftiques Mall, this tea lounge is a sweet way to warm up this season with more than 40 different teas including ceremonial matcha and Yerba mate.

This Zen-like little park features a half-mile walking trail and labyrinth. But, the most special element is its monument that was hand-built in Gwangju, Korea by Korean craftsmen and artists who traveled to San Antonio to assemble it. For an out-of-this-world experience, the Scobee Education Center’s planetarium opens to the public on Friday evenings with special presentations. After the show, you both can count your lucky stars through the Scanlan Observatory telescope. For a charcuterie board that’s dressed to impress, look no further than this restaurant, where chef Steve McHugh makes use of regional ingredients that celebrate the art of handcrafted, cured food. And, it's located in a renovated historical building at Pearl for the ultimate old-meets-new vibe. If you both are foodies, then feast your eyes on this treat of a place. The vibe is undeniably cool at this under-the-radar hotspot. The dinner menu is divided into taste sections like Heat, Chilled, Grilled, Hearty, and Crispy. But, you may want to go for brunch, because that’s where you can get the thicker-than-ever almond-pistachio French toast, handkerchief crepes with bourbon-glazed apples, and the biscuits and gravy of your dreams. This subterranean gem is made for a secret rendezvous with its dimly candlelit surrounds, cool beats, and cozy cocktails. Get your dose of antioxidants at this vibrant gem of a place that will have you and bae loving this little experiment. The Golden Milk is perfect for winter, and the Detox will set you both straight after one too many holiday soirees. The Spanish Colonial-Revival courtyard is the real hidden paradise of this museum. But, the range of thematic, immersive experiences inside the McNay is worth the trip, too. Gelato in the winter is completely acceptable — especially when served with crispy-cozy paninis, soups, and espressos. It's the best of all these worlds at this place that's perfect to share all the things.

Gallery on the Park With a sweet atmosphere and some serious Southtown quirk, this coffee shop is made for wintertime with its roster of hot beverages crafted from beans roasted in-house. They also have seasonal treats like gingerbread donuts, cookies, and other holiday faves.

Even though this place has been around since 1973, the neighborhood bar still feels like a hidden gem. Along with those cocktails, the menu is a Southern comfort-food fix like no other that will warm you up from the inside out — and fuel any games of pool or trivia nights that might be happening here. Zen is so in, at least at this natural sanctuary was once a rock quarry. Now, it’s a picturesque oasis — even in the winter — with lush landscaping, stone bridges, koi ponds, and waterfalls that feels like a serene escape from the world, which is so romantic.

The real rock stars are here, where the cool, living cavern is an underground marvel that’s only about 14 miles northwest of San Antonio yet it feels like a hidden secret below the earth. In addition to all the undulating formations, the millions of glistening water drops that decorate the Diamond Ceiling are pretty spectacular. You can definitely get lit here. During Christmastime, this Tex-Mex restaurant in the El Mercado district feels especially festive — and that’s because every square inch is covered in shiny things like stringer lights and tinsel. The party just doesn’t stop, either; the place is open 24 hours.

An up-close-and-personal romp with wildlife, this 450-acre Texan-style African safari park houses more than 500 exotic animals that you can see and sometimes even touch from your car. It’s like an exotic safari that’s less than 30 minutes away from downtown. The seductive, unique setting of this rooftop bar is basically all you need to know. Quirky-bohemian hangout by day, and a sultry hotspot by night, it’s a 100-percent ideal place to cuddle up in the winter.

This place is almost too cool for its own good. You can play with both your food and drink at the intimate 12-table venue that features bright pops of color and mod art. But, it’s the kitschy, hyper-garnished mimosas and bloody Marys that really are the star of the show.

This secluded sanctuary at the Cantera Resort oozes with lush seduction and tranquility, as it’s immersed in nature and situated on one of the highest points in San Antonio for breathtaking views of the Texas sky and surrounding Hill Country. And, we haven’t even gotten to the spa treatments yet. Those are just as spectacular. Time to take a break from the craziness of the season and #treatyoself and your S/O.

Carbs don’t count in the winter, right?! Get all the cheesified gluten at this newish pizza joint with super-sleek surrounds before too many people find out about their sourdough pies with all sorts of crazy, gourmet toppings. This treat of a place is a gluten-free, clean-food restaurant, coffee shop, and yoga studio where intentional living and wellness is the mission and the mantra is “breathe, nourish, connect.” Namaste.

You don’t have to rule out this garden just because it’s wintertime. The 38 acres of foliage, paths, and trails take on a different sort of beauty with fall colors, holiday decorations, and dazzling geometric greenhouses that add to the natural allure. Journey through the looking glass at this magical restaurant that you may overlook by virtue of it being in the Hotel Havana. But, the sleek glass conservatory design, punctuated by velvety textures, jewel tones, and chic chandeliers, is so sexy for date night.

A whole lot tastier than #ThrowbackThursday, #ConchaThursdays at this cozy neighborhood eatery inside the beautiful Yanaguana Garden at Hemisfair means you and your date can each get a concha burger (it’s sweet and savory with bacon, creamy brie, and sriracha strawberry jam!), fries, and beer for mere dollars. Or, have a margarita to heat up the cooler temps — or dream of summertime. Plus, they often have live entertainment on their deck. Perhaps one of the more romantic sunset strolls in the city, the eight-mile hike and bike trail combines old-world charm with natural beauty and takes the River Walk to another level. The wooded landscapes, pedestrian bridges, pavilions, and views of four old Spanish missions (Concepción, San José, San Juan, and Espada) are especially beautiful at sunset. The most enchanting white peacocks (and “regular” ones, too) roam freely at this fantasy of a place at Fort Sam Houston. The actual Quadrangle building and clock tower, originally constructed in 1876, is pretty impressive, too. It's part of The Witte Museum, but this treehouse is such a special little lookout that boasts views of the San Antonio River and Brackenridge Park.

Nostalgia reigns supreme with the old-fashioned Ferris wheel, the famous hand-carved Herschell Spillman carousel, and other classic kiddie rides. The charming location dates back to 1925 and ranks as the oldest children’s amusement park in the country. The velvety smooth layers of jazz music are so romantic, especially during the cozy season. The smooth and soulful sounds radiate through this clubby space in the cellar of the Bottling House at the historic Pearl Brewery. In addition to jazz, you can hear a full spectrum of other styles, too.

Go back in time at this Victorian wonder that reflects the Art Nouveau style of the 1920s all throughout the restaurant, roof garden, and museum. The real reason to go — aside from the Christmas decorations — is for the classic breakfast spread (think buttermilk biscuits, sweet cream waffles, and the like). It’s served all day (7 a.m. to 3 p.m.), every day.

Oktoberfest might be over, but that doesn’t mean you and bae can’t still cozy up to a slice of Germany in the heart of Texas. Located in the historic King William District, this place has all the authentic food and drink — think schnitzel, goulash, beer, and all the rest — to keep you warm this winter along with live music, special first Friday events, and more.

This tucked-away gem just off the River Walk is the Briscoe Western Art Museum’s lush outdoor space and it channels the wild, wild West with bronze sculptures and other southwestern-inspired moments.