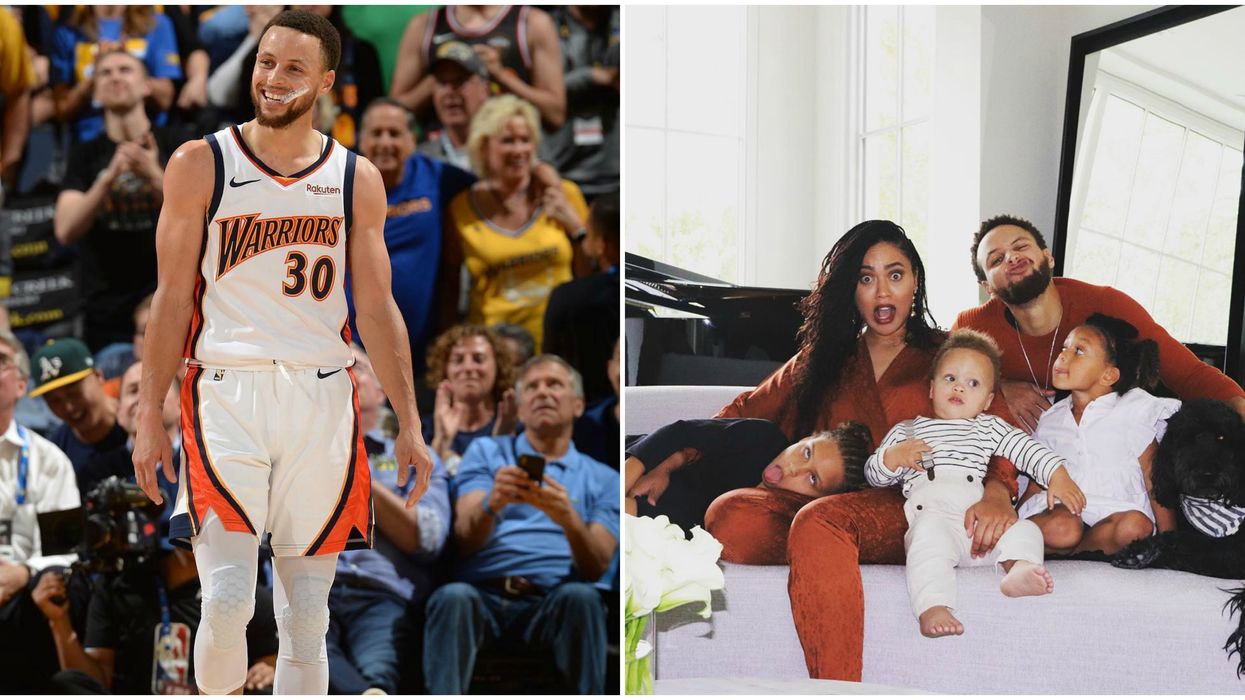 During Saturday's game, Warriors superstar, Steph Curry, and his daughter had a heartwarming moment that you have to see. As the team was battling the Dallas Mavericks in Oakland, Curry ran over to his daughter, Riley, and the two did something pretty adorable. If you haven't seen the Steph Curry handshake yet, get ready to grab some tissues. This dad moment with his 7-year-old daughter is too cute to get over.

Stephen Curry hasn't played a game in months, but he is still making us smile. This special moment with his daughter shows why everyone loves Steph.

Riley, which is the oldest of Steph's three children, stole the show on Saturday with their very special -- and detailed -- handshake.

After the elaborate handshake, Riley planted a kiss on Steph's cheek (seriously, who's cutting onions!?)

Steph's kids are seen at many Warriors games and their courtside antics are always pretty darn adorable.

However, all of that cuteness might have been a little too much of a distraction for the Warriors, as they went on to lose the game to the Dallas Mavericks 121-141.

This handshake isn't the only heartwarming topic of discussion with the Curry family recently. Just a few weeks ago, Steph and his wife received matching sentimental tattoos.

While the Warriors' season isn't anything to smile about, this super precious moment between Steph and Riley is sure to put a grin on your face.

We aren't the only ones who love this touching Dad moment; Twitter is also going crazy about the viral video.

Steph and Riley might be the best father-daughter duo in sports today.

#stephcurry and his mini me #rileycurry have their secret handshake down pat 😍 https://t.co/dCuqzlBtKE
— Briana the Guru (@Briana the Guru)1577672329.0

He isn't making moves on the basketball court due to his injury, but Steph is still making headlines with his adorable family moments.

Mr. Curry seems to be the father we all love, and this recent father-daughter moment with his sweet Riley has us all melting.

Just over one year since he and Meghan Markle made the move to America's west coast, Prince Harry has landed a new job.

The Duke of Sussex has now assumed the role of chief impact officer at a Silicon Valley startup known as BetterUp, which specializes in improving the mental health of employees at major corporations.

GoFundMe For 75-Year-Old Asian Woman Who Was Attacked Has Now Raised Over $600,000

She was assaulted on Market Street in San Francisco but fought back.
Sergiy Beketov | Dreamstime

On Wednesday, March 17, a 75-year-old Asian woman was attacked while shopping in San Francisco, but was able to fight off the attacker, according to CNN.

The woman, who has been identified as Xiao Zhen Xie, received "two serious black eyes" and a swollen wrist from the incident, and is no longer comfortable leaving her home, according to a GoFundMe page set up by her grandson, John Chen.

It's not often you see an entire historic house rolling through the streets on your morning walk.

The citizens of San Francisco were treated to this incredible sight, as a two-story Victorian house was moved to a new address after sitting still for over 139 years.

You Can Discover This Whimsical Rainbow Staircase Hidden In California