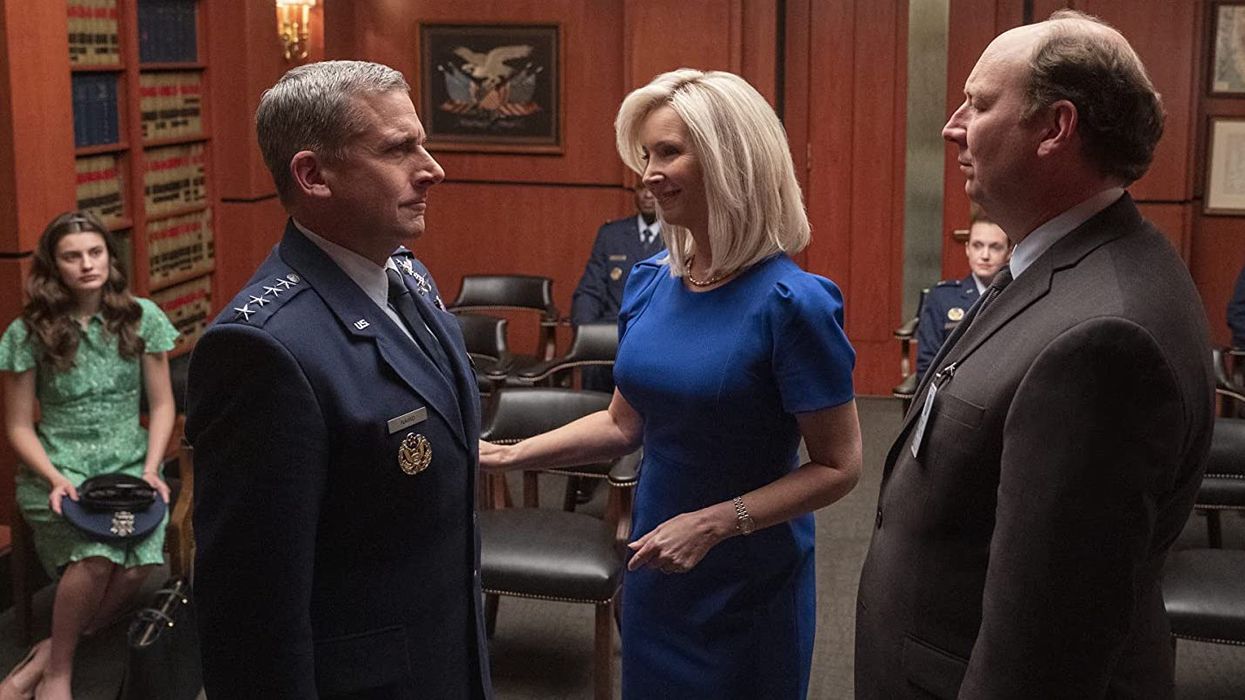 Ready for your next adventure? A brand new comedy series is coming our way this week and it's set to be a star-studded experience. You can look forward to seeing Steve Carell in his most recent series since The Office, and the Space Force Netflix cast also includes a Canadian actor who's been in so many of your favourite sitcom shows.

The 10 episodes of season one premiere on May 29 and follow the stories of the "people tasked with creating a sixth branch of the armed services: The Space Force," per IMDb.

Creators Greg Daniels and Steve Carell also worked together on The Office, so you can expect similar levels of satirical humour to get you giggling.

Carell stars as General Mark R. Naird, a decorated pilot who has big dreams of one day being head of the Air Force.

Deadline claims that Naird gets trapped into being the leader of The Space Force where he's tasked by the White House to get Americans on the moon again in order to take over.

The star-studded cast acting alongside Carell includes Canadian actor Don Lake who plays Brad Gregory. He was born in Toronto in 1956 and is an alumnus of the Second City theatre group in 1982, per IMDb.

Lake is best known for his role as Dr. Meldmann in Dumb and Dumber To and for voicing Stu Hopps in Zootopia.

During his 40 years in the acting industry, the 63-year-old has been in episodes of TV shows including The Golden Girls, Ellen, The Fresh Prince of Bel-Air, Bonnie, The New Adventures of Old Christine, American Dad!, Psych, and NCIS.

In 2012, he appeared in Modern Family as Dr. Sendroff, Last Man Standing as Professor, and How I Met Your Mother as Judge Albert Donovan.

Lake has also acted alongside his fellow Second City alumni Eugene Levy and Catherine O'Hara in movies A Mighty Wind, Best in Show, Waiting for Guffman, and For Your Consideration.

John Malkovich plays Dr. Adrian Mallory in all 10 episodes of the series. You may know him from In the Line of Fire, Dangerous Liaisons, and RED.

Sonic the Hedgehog's Ben Schwartz stars in all 10 episodes as F. Tony Scarapiducci. He's best known for playing Jean-Ralphio Saperstein in Parks and Recreation, and for voicing animated series including BoJack Horseman and DuckTales.

The late Fred Willard's last on-screen performance is as Fred Naird in the upcoming series. With over 300 acting credits on his resume, Willard's unparalleled talent saw him star in Anchorman: The Legend of Ron Burgundy, Modern Family, Everybody Loves Raymond, as well as A Mighty Wind and Best in Show alongside Lake.

Friends star Lisa Kudrow will appear in one episode of the series as Carell's wife, Maggie Naird. Kudrow recently appeared in episodes of Feel Good, The Good Place, and Unbreakable Kimmy Schmidt.

Funnyman Patrick Warburton will also appear in only one episode as Marine Corps Commandant. You know him for starring as Jeff Bingham in Rules of Engagement, Jeb Denton in Less Than Perfect, and David Puddy in Seinfeld.

Glee's Jane Lynch will also make one appearance as Joint Chief of the Navy. The actress has been in series including The Marvelous Mrs. Maisel, Two and a Half Men, and Criminal Minds.

Space Force will be available for streaming on Netflix on May 29. You can watch the trailer below.