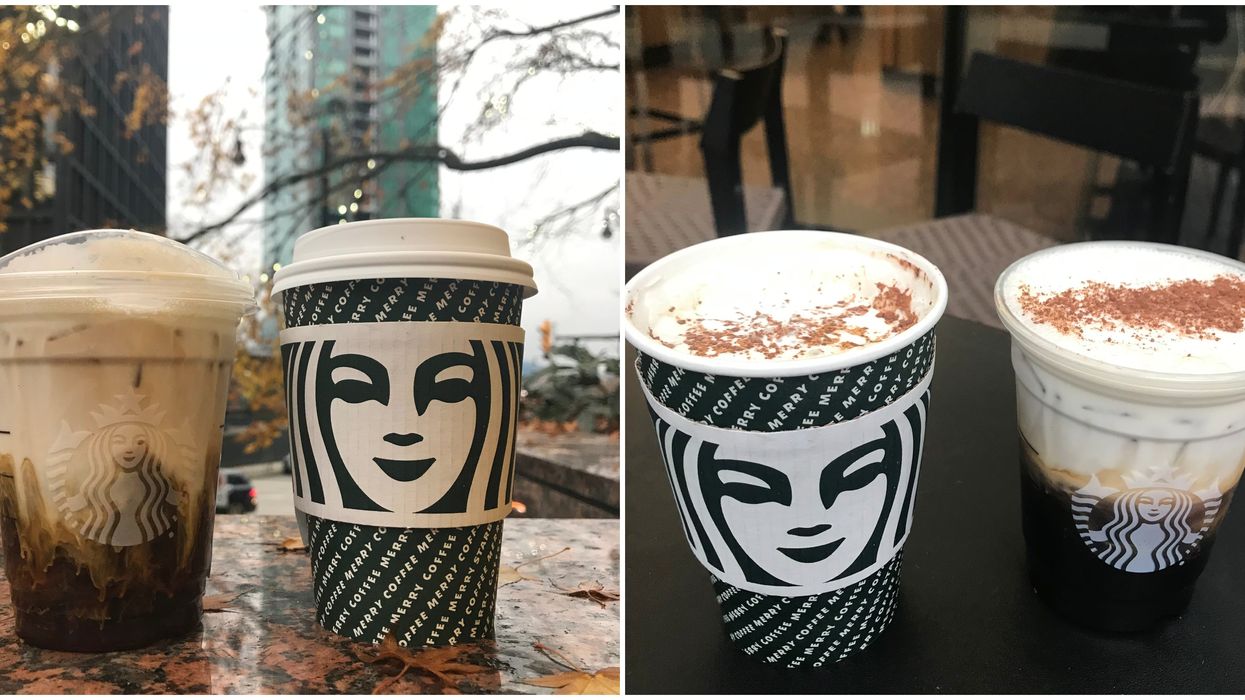 Rather than an addiction, I like to say that I have a love of coffee. My day is always better when I start it off with the perfect morning cup. I went chasing that "first sip feeling" at to see what Starbucks' "Irish Cream" coffee was like.

Starbucks' new drinks just dropped on Tuesday, December 3. These two limited-time menu items are the only new addition to their menu this holiday season.

I'm hugely into coffee, and I've even been a barista in a past life. I have an espresso machine at home, and whenever Beanstock, the coffee festival, comes to Vancouver, I always have a VIP ticket.

I got the only-in-Canada Irish Cream Americano and an Irish Cream Cold Brew to see if they'd satisfy a coffee drinker who's about to hit that 3 p.m. slump.

They were both super easy to order and clearly marked on signs when I arrived at the Starbucks closest to my office.

These two beverages looked incredible. Especially the cold brew version because it came with that snow-white top with a black coffee bottom that slowly integrated and mixed together as you wanted.

Made with Irish Cream syrup, vanilla sweet cream cold foam and topped with a dusting of cocoa — here's what the drinks tasted like:

My first thought when I tasted it was that it felt like International Delights creamer. It's a nostalgic taste since, like many kids, I would secretly drink the little tiny creamers from the coffee bar at the local 7/11.

I was reminded of the Irish cream flavoured coffee creamer, except this Starbucks version is more refined, polished and way less sweet.

You can definitely taste the cocoa notes and finish, plus there's a hint of vanilla.

Mostly, you notice the thick, heavy cream flavour. It's so creamy that it felt like I could taste the buttery fat in the coffee, so anyone who loves keto-friendly buttered coffees is going to flip for these drinks.

What's the difference between the two?

The cold-brew version tastes a bit cleaner and lighter than the americano version. Plus, it was way creamier and richer than your average iced coffee with milk.

The americano version gave a more homey and familiar feel, especially as a coffee drinker.

The verdict: anyone who loves a bit of coffee in their cream in the mornings is going to love switching up their morning brew for one of these new drinks. Neither of them is overly sweet like you might expect.

The cold brew version is deadly delicious, and the americano version lets you savour a decadent version of your usual coffee with cream.

If you want something sweeter, try the secret menu items like the "Rudolph The Red-Nosed Reindeer" Frappuccino.