Swoop Has Cancelled Even More Flights & Travelling Canadians Are Furious

Around 1,000 travellers have been affected by the recent domestic and international cancellations. 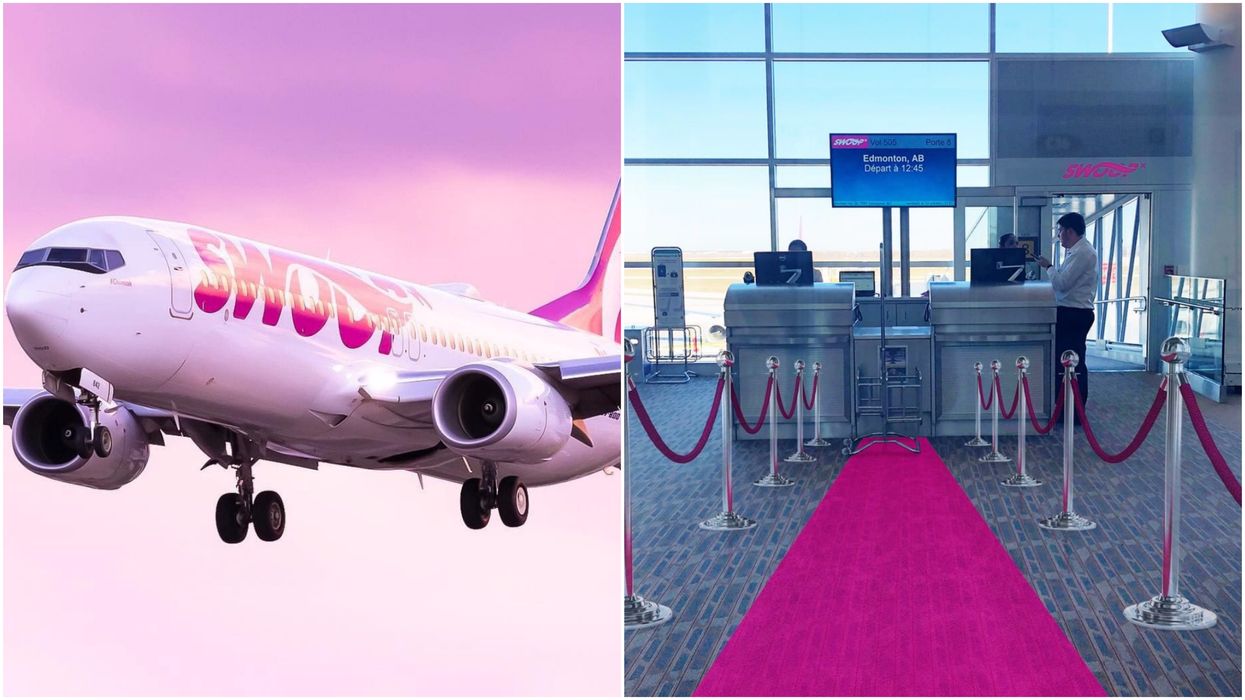 The Canadian airline Swoop has been forced to apologize to their customers and promise them compensation after a damaged aircraft has led Swoop Airlines to cancel multiple flights. According to the Swoop president, the plane had ‘unspecified damage’ from a previous flight, prompting the airline to ground the aircraft for repairs. This led to hundreds of passengers being informed via text that they would not be able fly as scheduled, with some people unable to catch a replacement flight until early September.

Throughout the day on Wednesday, the budget airline cancelled several of their flights due to unexpected issues with a faulty aircraft. Cancellations affected numerous domestic and international services, including flights to and from B.C., Winnipeg, Edmonton, Hamilton, Las Vegas and Orlando.

It is estimated that approximately 1,000 people would have been forced to make alternative travel arrangements due to the cancellations from Swoop, who did not expect the aircraft to be up and running again until Thursday.

These cancellations were in addition to the grounding of the airline’s Kelowna to Winnipeg service, which was due to take off earlier this week. Speaking to Global News, passengers due to take the flight explained that they were offered replacement flights by the airline, but most of them were not until early September, up to 11 days later than their original flight date.

Passengers Pat Ward and Emily Rae were scheduled to return home from a wedding in Kelowna on Monday, but received a text from the airline on the same day telling them that their flight had been rescheduled to September 6, over a week later. Describing the situation as “ridiculous,” Ward asked, “Eleven days that you’re going to stay in Kelowna and not get back to your job?”

Another disgruntled passenger with a cancelled Swoop flight agreed with this sentiment, explaining to Global News, “[People] can’t be away from home this long with jobs, kids, school starting. It just puts everyone out.”

@FlySwoop Congratulations on your latest 11 day delay for the flight from Kelowna to Winnipeg. Your success will en… https://t.co/DW3gOeb5oC
— Mike (@Mike)1567002990.0

One traveller even explained how it was not until boarding in the airport that she found out her flight was going to be cancelled. “It’s pretty stressful when it seems like they put it on us to find a way home. It’s unbelievable to me that they could kind of abandon us,” she said.

Abandoned passengers also took to Twitter to complain to the airline about the cancellations, with one user writing, "@FlySwoop Congratulations on your latest 11 day delay for the flight from Kelowna to Winnipeg. Your success will ensure plenty people like myself will never step foot on your airline. Swoop... should change your name to Screwed."

According to the airline’s president Steven Greenway,  Swoop is in the process of providing all impacted passengers with alternative travel arrangements. When asked about the travellers who will have to wait over a week for a new flight, Greenway explained, “If the flight is not satisfactory, travellers are welcome to book alternative travel arrangements.”

Swoop will reimburse travellers who have taken an alternative flight, providing the seats are booked in the same service class. For delays of three or more hours, Greenway said the airline also offers meals, a hotel and transportation vouchers.

Hey @FlySwoop, hearing horror stories from folks stranded and forced to rebook because of cancellations. I hope you… https://t.co/MXWyloaALQ
— Colin Koop (@Colin Koop)1567017639.0

Despite this, one customer told Global News that one Swoop representative did not offer her a reimbursement, but instead advised her to “ask family members, boyfriends, girlfriends or people to help out and get you home.”

In an email statement to Narcity, a representative of Swoop apologized to impacted customers saying "On behalf of Swoop, I would like to sincerely apologize for any inconvenience our impacted travellers have experienced due to the unscheduled maintenance to one of our aircraft."

They also confirmed that "Swoop is working to ensure all impacted travellers are provided with alternative travel arrangements in accordance with our Tariff and Flight Interruption Policies. All impacted travellers are rebooked on the next available Swoop flight. If the flight is not satisfactory, travellers are welcome to book alternative travel arrangements. Swoop will reimburse the cost for tickets booked in the same class of service (basic economy) with other airlines. Any travellers delayed more than three hours have received meal, hotel and transportation vouchers."

According to the representative, the aircraft returned to service on Thursday, August 29 at 7:30 AM ET.