All monkey business all the time on Monkey Island! 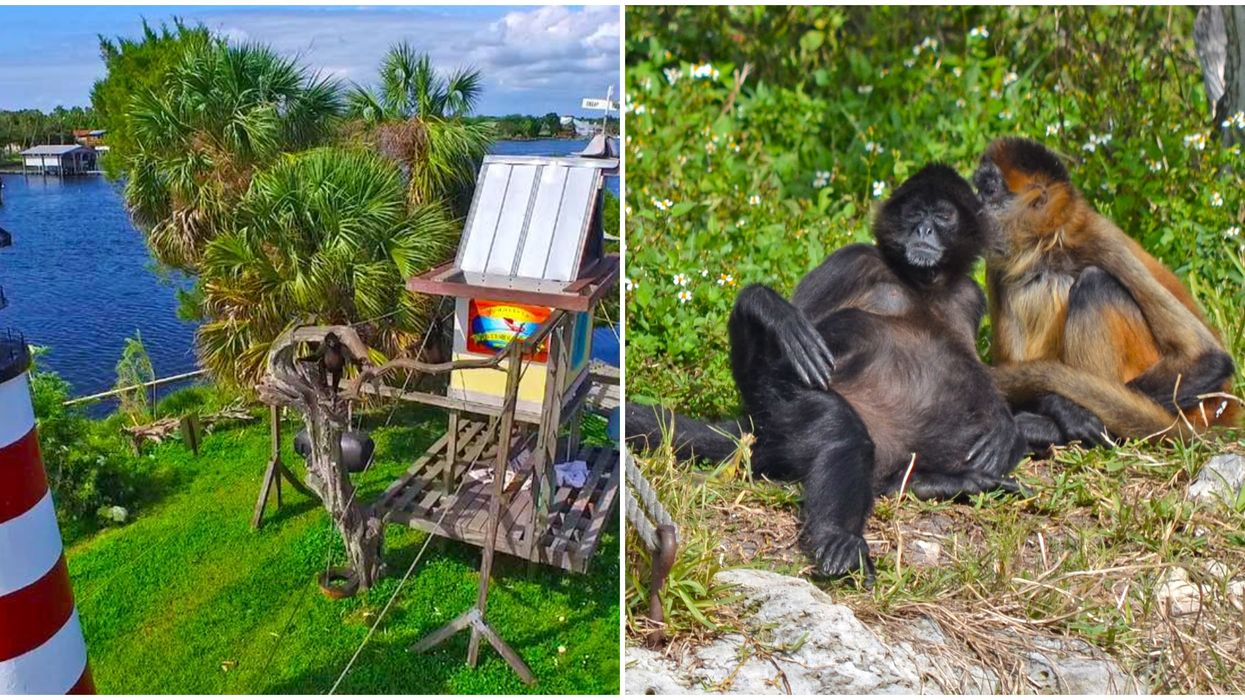 There's something about monkeys that makes us smile. Maybe it's because they look a little bit like us or because they're so fluffy and full of personality. Regardless of why you love them, you can watch monkeys in Florida on a 24-hour live cam.

Monkeys, in the Sunshine State? It's true!

Once an undeveloped piece of land called Monkey Island, sometimes referred to as Monkey Alcatraz, the little plot of paradise sits alongside a resort and bar in Homosassa, Florida.

From a seat at Monkey Bar & Grill or a suite at the Riverside Resort nearby, you'll have prime viewing conditions of the island. However, it's not always possible to make your way to the quaint coastal town to check out these chimps.

You can actually catch a glimpse of these furry friends monkeying around without ever leaving your bedroom though. The Riverside Resort has a 24-hour live cam set up for viewing on their website.

The camera has a direct view of the isle of monkeys and the surrounding water, where you can see them climb their play place, swinging on tire swings, enjoying a meal at their scheduled feeding times, or even interacting with people kayaking to the island as they float nearby.

How did this island even come to be? Monkeys aren't native to Florida, so how did they get here? The plot of land used to be a pile of rocks that once thwarted would-be boaters, as they couldn't be seen lurking below the surface at high tide.

A man by the name of G.A. "Furgy" Furgason was a major influence of the development of Homosassa at the time, leaving instructions for workers to build dirt around and over the rocks for boaters to see it better.

In an effort to clean it up and add appeal, Furgy had a lighthouse built upon its dirty, rocky shores, adding plants and other greenery.

Furgason also had a wildlife attraction at the time, with some monkeys prone to getting into trouble, as they'd escape their enclosures, steal candy from guests, and get into their cars.

He joked "Send them to Alcatraz!", then realizing he had a mini version with a lighthouse atop that he could house the animals — thus the nickname Monkey Alcatraz.

The island was later developed further to include a jungle gym, with sleeping enclosures, and more to accommodate their stay atop the rocky knoll. Their set up is regularly changed and rearranged to include diverse shrubbery, entertainment, and comfort for these rambunctious creatures.

Florida's history is a weird one, and it's interesting to see how monkeys not native to our marshy swamplands have come to thrive in the Sunshine State.

Surprisingly enough, Monkey Island isn't the only place you can find monkeys here! You can see wild ones roaming this jungle-like state park in Central Florida, see them living their best life on this Florida Beach, spot them on a kayak tour, and even get a hands-on-experience on a rainforest tour.

You can watch the live stream of Monkey Island from Riverside Resorts' website here, as well as read the full detailed story of how the island came to be here.