This Hidden Florida Bar Was Decorated With Over 10k Dollar Bills, Until This Happened

So much money, donated to a good cause. 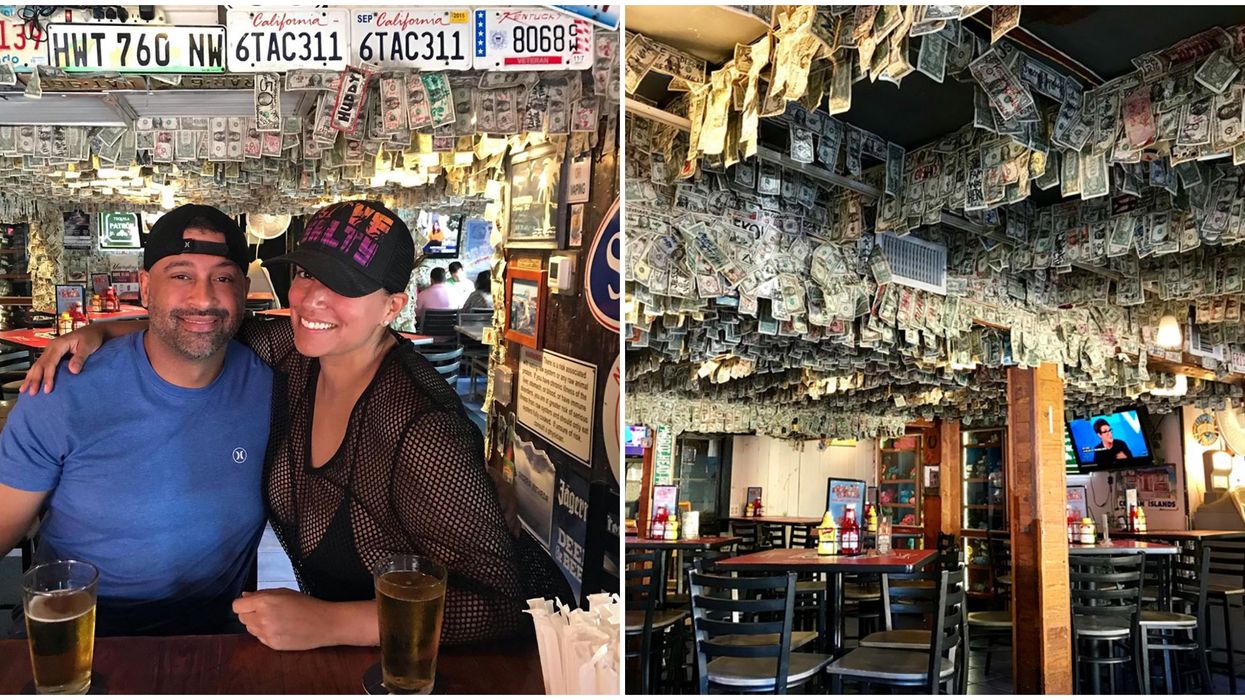 There's something magical about going into a bar and seeing decor that's a little out of the ordinary. A unique bar in Florida known for its delicious seafood and dollar bill decor, might not look quite the same after deciding to take down some of their bills for a good cause.

After Hurricane Dorian blew through the Bahamas, photos of the devastation shook the world to their core; the deaths and destruction left in its wake destroyed families and homes, leaving many without the basic means for survival and their loved ones.

After seeing the destruction, Siesta Key Oyster Bar in Sarasota knew they just had to do something. 40 staff members bound together for a monumental task, to remove the beloved dollar bills from the walls & ceiling to donate to Hurricane Dorian relief efforts.

"After we saw the videos and everything that came out of the Bahamas, it was unreal,"  general manager Kristin Hale of Siesta Key Oyster Bar told 'Good Morning America', "What better reason to pay it forward?"

When the month-long process began, staff soon began to realize that the bills were pinned in layer upon layer — those 16 years of guests leaving notes on their banknotes and pinning them to the walls ended up really paying off for those in need.

According to ABC News, when Hale took the bills to their local bank the total came out to nearly $14,000; $13,961 to be exact. The funds are being donated to the American Red Cross for those affected by the Category 5 storm that left about 76,000 people homeless and ended the lives of at least 50.

This isn't the first time that SKOB stepped up for a good cause either. Owners Jill Pedigo, Beth Owen-Cipielewski and their husbands have taken down cash to donate some of it to other local charities, including a safe house for women who struggle with domestic violence according to Hale.

According to Hale, the staff never expected such a sum, saying that it was a little overwhelming to think about. We can only imagine who all that money will help and how it will impact their lives.

While it won't be covered in bills to quite the same magnitude, quite a few bills still hang the halls of SKOB according to Hale. Maybe we'll go grab a sip and some seafood and leave another bill to keep the charm of this little bar going — and it just might affect more lives in the process.

We're thankful for all the cool things coming out of Sarasota lately; if you plan to hit up SKOB, you may also want to unleash your inner kid at a new adult-friendly inflatable theme park — they even have an indoor rail coaster, this stunning exotic floral oasis with rare blooms, or maybe even stay at this surprisingly affordable Tiny Home restort to hit up Siesta Key Beach while you're at it.