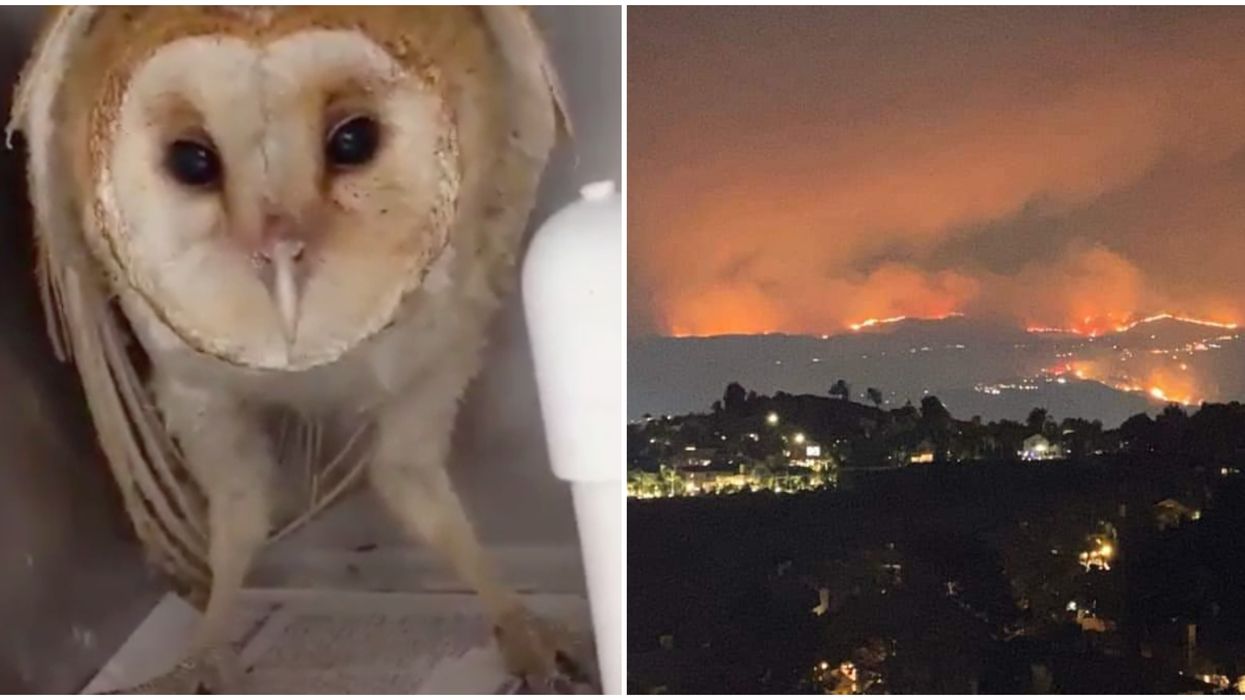 The barn owl that was rescued in Orange County by firefighters on Tuesday night from the flames of the Silverado Fire is recovering nicely, in some much needed good news.

The large owl was brought to the Serrano Animal and Bird Hospital in Lake Forest to be treated for burns after firefighters scooped him up out of the flames and into one of their yellow jackets.

He stared up at the men, letting them handle him, and then calmly sat wrapped in the jacket on one of their laps, as he was transferred to the hospital.

He's doing a lot better now, though — the Serrano Animal and Bird Hospital posted this update today to their Instagram showing him swirling his head around and screeching like a little raptor.

Earlier in the week, it was a pretty bleak situation for this owl.

Most of the owl's injuries were due to burned feathers.

The Serrano Animal and Bird Hospital has been helping to evacuate other animal organizations affected by the fire.

If you would like to donate to the cause of caring for this owl (and other birds of prey affected by the fires), you can do so at the Orange County Bird Of Prey Center's website.

The former CDC director disagrees with one of the findings.
CDC

The coronavirus pandemic has been affecting the lives of people globally for over a year now, but it is still unknown where exactly the virus came from.

The World Health Organization (WHO) released a report Tuesday giving four possible origins of the virus, with the first one being from an animal, most likely a bat.

Police have identified the victim in an investigation that involves 35-year-old Dr. Brian Nadler, an Ontario doctor who's been charged with first-degree murder.

Albert Poidinger, 89, was pronounced deceased at the Hawkesbury & District General Hospital (HGH) in Hawkesbury, Ontario, one of several "suspicious deaths" there.

Leave it to Ontario beavers to disrupt morning commutes in the GTA for two days in a row.

According to the OPP, one little critter was spotted walking on Highway 407 in Whitby at around 9:00 a.m. and clearly, it was in no rush.

Our actions were "a bit too little and a bit too late," says Dr. Colin Furness.
Premier of Ontario | YouTube

According to provincial hospital officials, Ontario's third wave of the COVID-19 pandemic has officially arrived.

The Ontario Hospital Association (OHA) took to Twitter on Monday to warn Ontarians that the third wave is upon us and that variants of concern cases are "steeply rising."