The billionaire co-founder of Tim Hortons has died and Canadians online are heartbroken. 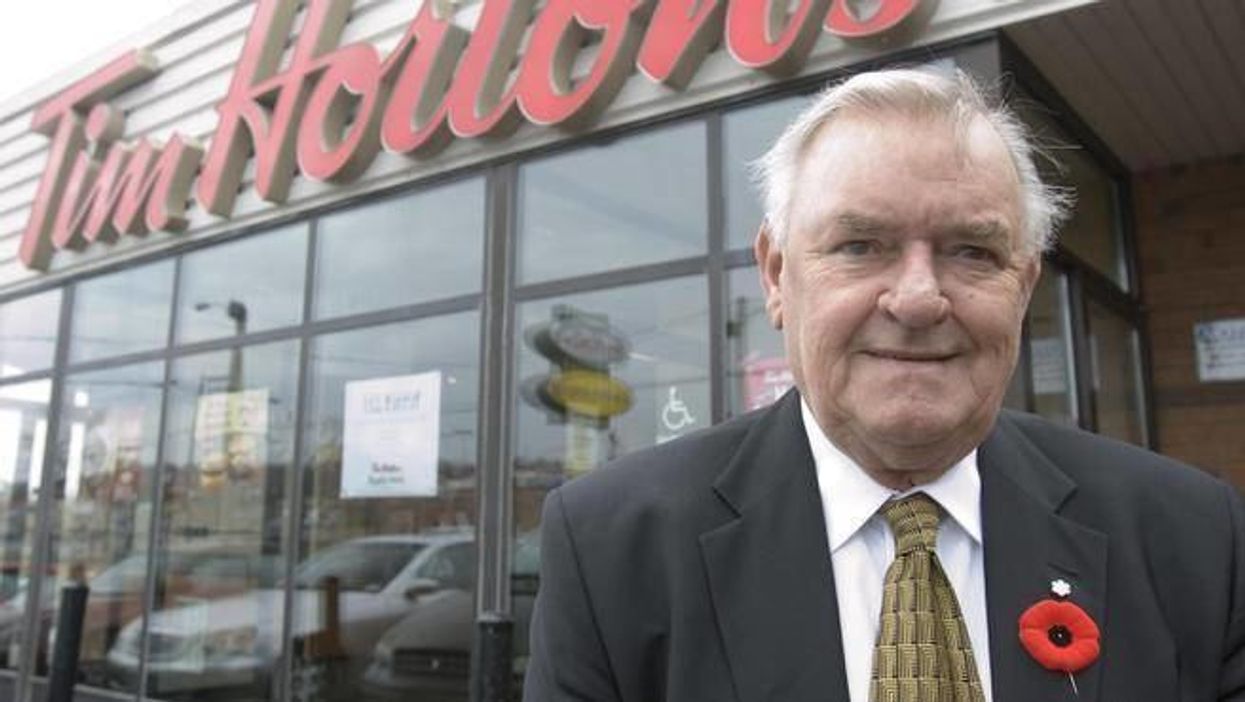 At 88-years-old, Ron Joyce, the billionaire co-founder of Tim Hortons has died and Canadians are heartbroken. Joyce was the very first franchisee of Tim Hortons and worked closely with the brand's namesake, Tim Horton himself to build what became one of the biggest Canadian empires. Before that though, Joyce was the ultimate underdog success story.

He was born in small-town Tatamagouche, Nova Scotia. He was raised by a single mother in a small home with an outhouse, no water, no electricity, and only a small wood burning stove for heat. He left for Hamilton, Ontario when he was only 15 years old.

After serving in the navy and as a police officer, he borrowed $10,000 to become the first franchisee of Tims, and it was then that he met Horton. He became a full-time partner in the company and in a book released back in 2006 credits himself almost entirely for Tims growing to the empire it is today, especially following Horton's tragic death in 1974.

Since then, Joyce took full control of Tim Hortons and has grown it to include 4500 locations around the world. He sold the company to Wendy's in 1996 and it was later sold to Burger King, but people are now remembering and praising Joyce for his hard work building the brand. Following the news of his death today, several Canadians have taken to social media to share their memories of Joyce and express just how much they'll miss him.

One of the big things that people are recalling about Joyce is his philanthropy. He was solely responsible for coming up Tim Hortons camp days, the Tim Hortons Children's Foundation, and his own Joyce Family Foundation to provide scholarships to students in need.

Not only did you help bring about a world renown product but you #Philanthropic endeavours were legendary. To all you #Timbits #hockey players out there #RIP Mr. Joyce, I toast my #DoubleDouble in honour of Tim Hortons co-founder #RonJoyce dies at age 88 https://t.co/VPZTWjpKBz

Played 18 holes w/ #RonJoyce @ FoxHarbr' Found him to be a complicated man.I loved what he accomplished w/ #TimHortons #ChildrensFoundationThat is the legacy that matters most. pic.twitter.com/tZmVU1Xq07

READ ALSO: The Classiest Tim Hortons In The World Actually Exists And It Isn't Even In Canada (PHOTOS)

Several other Canadians have simply offered their condolences. Many seem truly heartbroken by Joyce's passing.

I’m really sorry to hear about the passing of Ron Joyce co-founder of @TimHortons I had the pleasure of meeting him and his son, Steve @FoxHarbrResort last summer. Deepest condolences to his family.

Everyone should have a cup of @TimHortons coffee to pay their respects to the company’s co-founder, Ron Joyce. He passed away sadly today at age 88. What a business he built that has become entrenched within the Canadian identity. #RIP #TimHortons 🇨🇦 pic.twitter.com/835HoxxyEo

R.I.P Ron Joyce! The power of Tim Hortons will forever be a Canadian symbol. Thank you for your many years of dedication and passion for Tim Hortons. You'll never be forgotten❤🍵 #timhortons #ronjoyce

Sad to hear of the passing of Tim Horton's founder #RonJoyce. Our condolences to the Joyce family. @MohawkCollege is proud to be part of your legacy.

The Joyce family confirmed today that Ron Joyce passed away in his Burlington, Ontario home on Thursday, January 31. He was 88 years old.