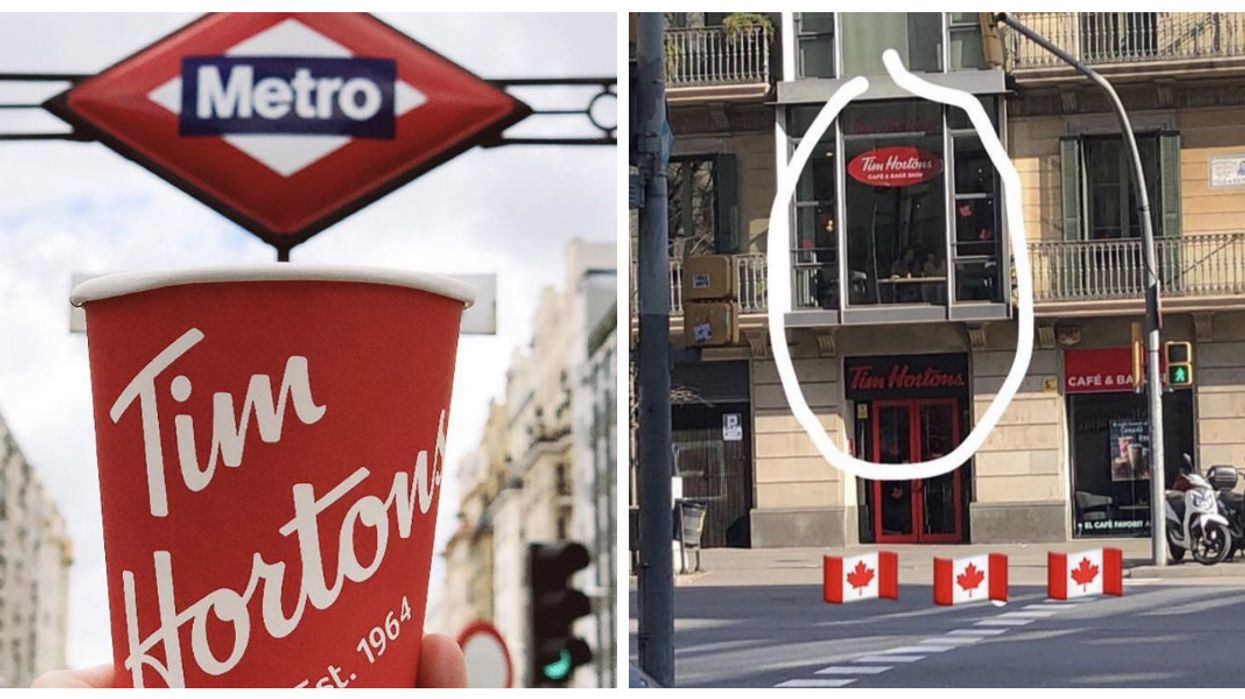 A few months ago, Tim Hortons opened a brand new restaurant in the heart of Barcelona, Spain. They celebrated the grand opening of the cafe (or "Canadian Coffee House", as it's called there) with a beautiful display of balloons in Canada's red and white colours and donuts with adorable maple leaf sprinkles. The new Barcelona Tim Hortons attracted tons of people and saw lineups out the door. Which isn't surprising, considering it's one of twenty Tim Hortons in all of Spain and is clearly somewhat popular.

Following the unprecedented turnout at the grand opening of China's very first Tim Hortons yesterday, it's time to show some love to another country that has welcomed Tim Hortons with open arms. Based on hundreds of four and five-star reviews posted online, it's clear that locals and Canadian tourists alike have great things to say about Spain's Tim Hortons cafes.

And why wouldn't they? The Barcelona cafe, for example, has massive picture windows overlooking the busy Carrer de Balmes, and tons of cozy seating areas to settle down and sip on a Double Double.

The menu is also a perfect mix of Canada's favourite staples and delicious additions that are exclusive to Spain. We definitely wouldn't be opposed to trying their Tostada con Mantequilla y Mermelada (toast with jam and butter), or Tostada con Tomate y Jamón Serrano Gran Reserva (toast with tomato and Spanish ham). So we now have a #TimHortons in Barcelona.Reasons to go back to Canada 🇨🇦:None pic.twitter.com/W3bmYfAOGz

"This is the best Tim Hortons. I have been to Canadian and American Tim Hortons but this is great," wrote one reviewer. "Staff was awesome helpful and friendly. Food was also nice. Coffee same as Canadian tastes." Here are a few more highlights:

"As a Canadian, I was really happy to find Tim Hortons in Barcelona. I didn't find any difference in the taste and the service is great," reads another glowing review.

And finally, one review that will warm your heart - "It’s very fancy and nice but it won’t compare to Tim Horton’s in Canada."