This Gamer Bar In Orlando Has Nintendo 64 Games To Play

You don't have to be player 2 at this bar!

90's kids know that the 90s were a better time - sitting cross-legged on the floor in front of your t.v. playing Super Mario or Mortal Kombat was the life, even if you had to be player 2. This bar in Florida lets you be player 1 no matter how you like to game - you'll want to come here for a drink and to make it your weekly save point.

Located in Orlando, Player 1 is every 90s kid and gamer geeks dream bar. It's bursting at the seams with arcade games, modern games, and pop culture references you're sure to know and get those warm fuzzy feelings of nostalgia from at this gamers haven. You may even get to see some characters you know there; their bartenders even like to dress up as cute versions of popular game icons such as Misty from Pokemon, or Ezio from Assassin's Creed.

From retro arcade machines to classic consoles like the Sega Genisis, Super Nintendo, and Nintendo 64 (yes, that means Super Smash Bros!) to modern day consoles like the Xbox One and Ps4, you'll have plenty of games to slay and play. You'll find popular retro titles like Super Mario, Pacman and Mortal Kombat 3, as well as steller modern day faves like Overwatch, The Witcher 3, and Fallout 4. Their arcade machines are free to play all with a $5 cover fee and open bar tab, while gaming on consoles will scale in price depending on which one you're playing.

Their modern gaming area has big comfy theater seats on giant screens so you can really lounge out while geeking TF out. If you prefer to sit closer to the bar, there's also an option to play your game sitting right at the bar on the overhead screens lining the wall behind it.

This game bar will unleash your inner child and bring back all those warm fuzzy feelings of nostalgia, with all the flash of what we love about gaming today.  Check out some awesome shots from Player 1 below: 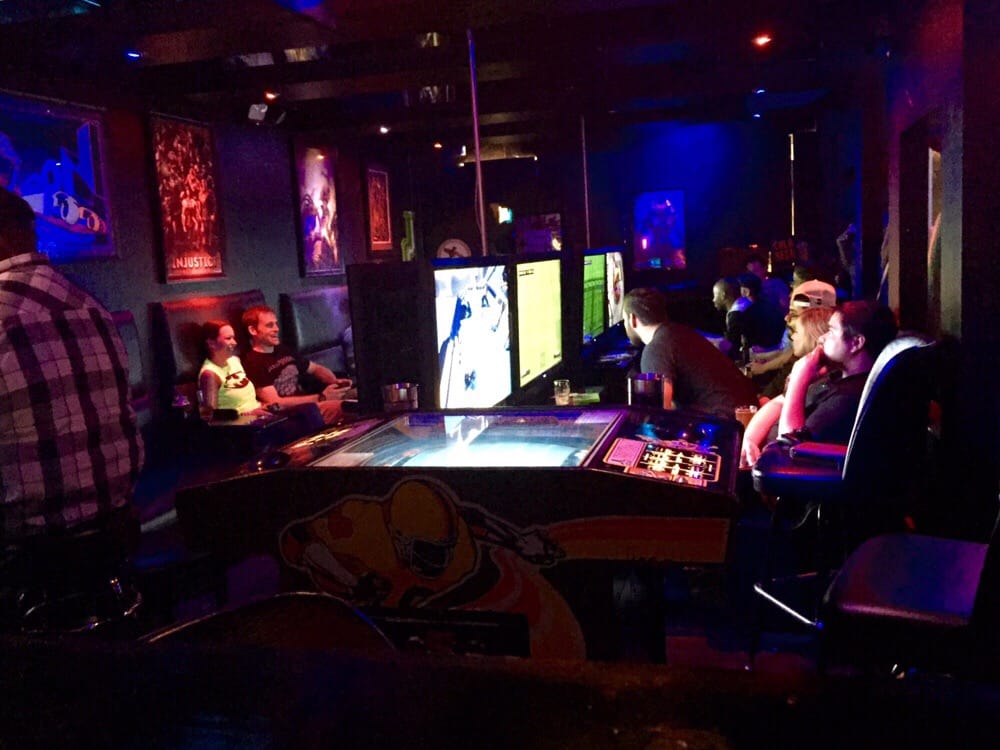 You can even try your luck at the claw machine filled with adorable gaming plushies if you need a break from a particularly stressful round of Mortal Kombat against your besties.

You won't find any liquor at this place - it's craft beer, wines, and meads only. If you're new to craft beers, they also have non-alcoholic beverages like Redbull, Kombucha, and Rootbeer. They don't currently sell meals, but they do have free popcorn to fuel your all night raid sesh. If you want to go grab a bite somewhere else, they stamp your hand so you can get back in later. Player 1 is open 4 pm to 2 am Monday - Thursday or 1 pm - 12 am on Saturdays and Sundays. The bar is open to people of all ages, but those under 18 must be accompanied by an adult at all times and leave by 6 pm. Those who are underage will have a larger cover fee since they won't have a bar tab, but it allows them to play all day and come and go as they please until it's time to go and leave all the gaming to us adults!

Plugging in and gaming out with a craft beer sounds like the perfect weekend retreat - TGIF! If you're ready to level-up, Player 1 bar is located at 8562 Palm Pkwy, Orlando, FL 32836.

For more information about Player 1, check out their website here.