Go on a Canadian adventure! 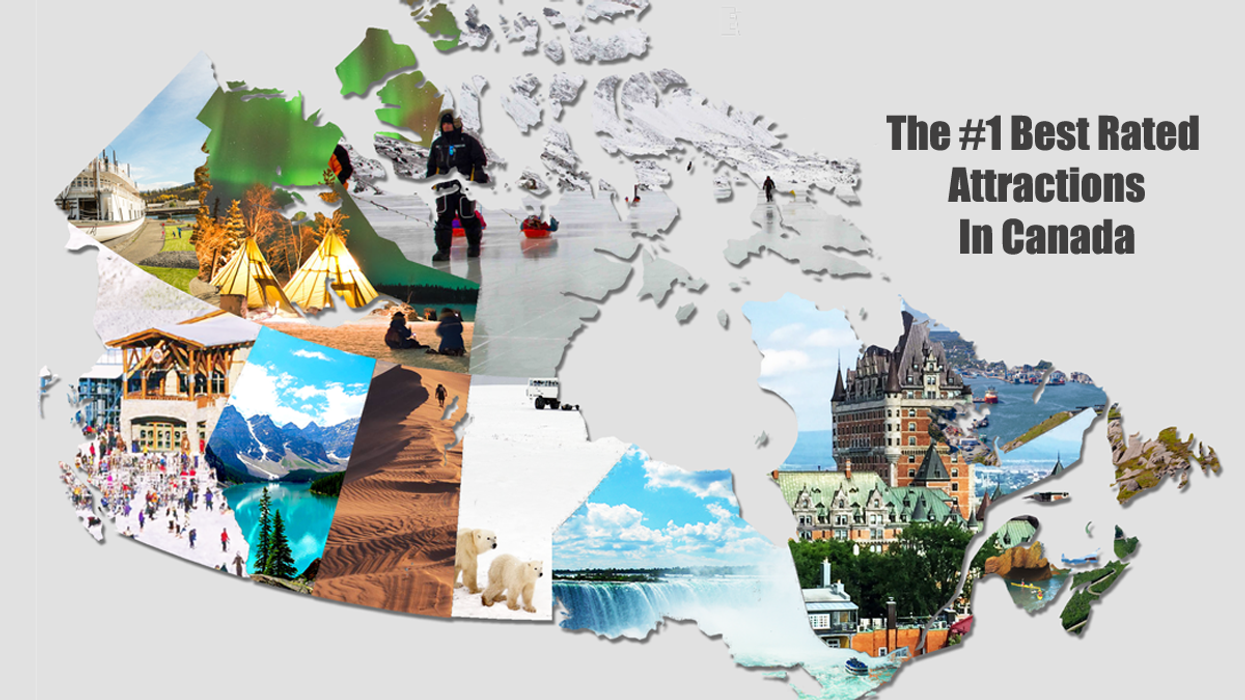 Canada is the ultimate destination for every traveller. Across its vast land are a plethora of natural wonders and diverse landscapes that make it a thoroughly interesting place to explore.

With so many things to see in Canada, it can sometimes be hard to decide which attractions to prioritize during your travels. That's why I've created this handy map, which shows you the top-rated attraction in every province and territory across the country:

Some of the selections were inspired by a poll conducted by the Toronto Sun, in which readers were asked to vote for their favourite attraction in each province. Others were chosen based on their popularity on various travel websites and forums.

Without further ado, here are the top-rated attractions in every province and territory, organized by region:

BC And The Prairies

For the top-rated attractions in the West Coast, click Next.

BC and the Prairies

Whistler Blackcomb is an internationally-renowned ski resort located north of Vancouver. Tucked away within British Columbia's wintery Blackcomb Mountains, the resort attracts thousands of of visitors every year for its epic slopes and cozy pedestrian village.

Banff is one of the most awe-inspiring places in Canada. The resort town is located within Banff National Park, which is home to some of the greatest sights in the country, including Lake Louise and the Canadian Rockies. The park is an adventurer's paradise, offering several opportunities for hiking and canoeing.

The Athabasca Sand Dunes represent the most northerly sand dune formations on Earth. It is one of the most unique and ecologically-fragile landscapes in Canada, with no on-site services and only primitive camping areas. However, guided tours are offered by licensed outfitters, and there are several opportunities to explore the area by foot or terrain vehicle.

Churchill is Canada's premier destination for polar bear watching. There are several resorts that offer tours of northern tundra regions so you can get up close and personal with the furry white beasts. These include everything from tundra buggy rides to even arctic walking safaris.

For the top-rated attractions in Central Canada, click Next.

Niagara Falls is perhaps Canada's most famous attraction. The natural wonder can be experienced in several exhilarating ways, from boat rides that take you close to the action to journeys behind the falls after dark. The Falls is also home to Clifton Hill, an entertainment district consisting of hotels, casinos, arcades, theatres and much more.

Other top rated attractions in Ontario include:

Old Quebec is a fascinating area in Canada that has managed to preserve the essence of its 19th-century heritage. The place, which is a UNESCO World Heritage Site because it is the only fortified city in North America, is brimming with European charm, with its cobblestone streets, sidewalk cafes and bustling public marketplaces.

Other top rated attractions in Quebec include:

For the top-rated attractions in Atlantic Canada, click Next.

The Bay of Fundy is one of the 7 wonders of North America. Aside from the fact that it receives the highest tides on the planet, it attracts over 12 species of whales and presents the once-in-a-lifetime opportunity to kayak beneath the iconic Hopewell Rocks.

Cabot Trail is a world-famous scenic drive that meanders through the hills of the epic Cape Breton Highlands. The surrounding environment is perfect for outdoor explorers, as it is brimming with challenging hiking trails, beautiful vantage points and shoreline attractions.

Signal Hill offers a breathtaking panorama of the city of St. John's. However, it is much more than just a hill with a view - the site is shrouded in Canadian history, which involves stories of notable figures, pivotal battles and even scientific revelations (Marconi). Signal Hill is also a popular crossing for several cruise ships that enter St. John's.

For the top-rated attractions in the North, click Next.

The Klondike Trail is a picturesque road that stretches from the Yukon River to Klondike. Along the way, travellers can visit national heritage sites, museums and cultural centres dedicated to the historic Klondike Gold Rush. There are also several natural wonders to see, including the odd Carcross Desert.

Aurora Village is an arctic resort in Yellowknife. Guests settle into authentic tipis where they can spend the night under the gleam of the beautiful Aurora Borealis. Snowmobile tours and viewing packages are available at the resort are conducted by the resort staff.

Baffin Island may seem like an uneventful place, but in reality it is one of the most exhilarating places to explore. Vast sheets of ice, towering mountain ranges and a variety of unique arctic land animals and whales make the island a prime destination for lovers of adrenaline.