Are they really dreamy? 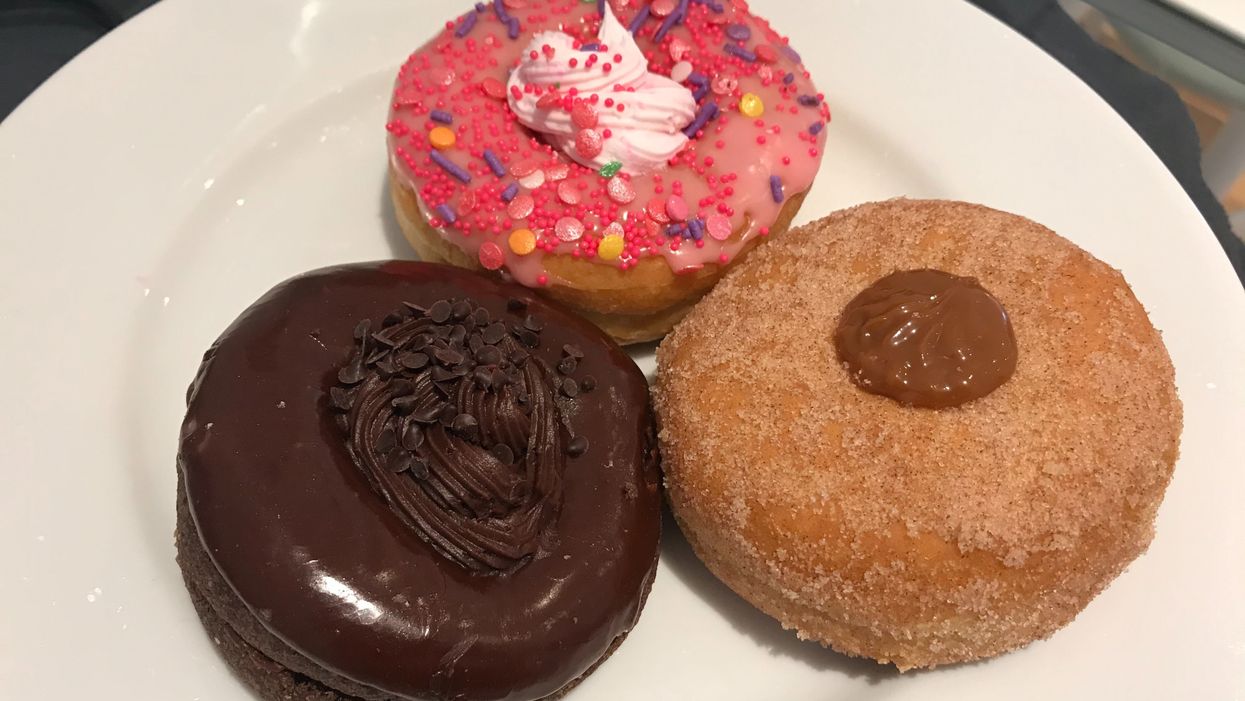 It's never a dull moment in the food world with new menu releases coming every day. Canada's unofficial coffee chain is no exception. The latest addition is Tim Hortons Dream Donuts, which were launched across the country.

They also go on to describe each item in the lineup.

The Dulce De Leche one is said to be sprinkled with cinnamon-sugar and filled with creamy caramel.

The Strawberry Confetti treat is dipped in pink, topped with strawberry icing and coated with confetti sprinkles.

Finally, the Chocolate Truffle option is described as a chocolate donut, cut in half and sandwiched back together with whipped chocolate filling before being dipped in chocolate ganache and garnished with dark chocolate shavings.

It all sounds pretty dreamy, which is probably what they're going for with the name they chose.

But before you bust out singing "This Is What Dreams Are Made Of" like Hilary Duff in the Lizzie McGuire movie, I had to test out these so-called dreamy desserts for myself.

I tried all three of the brand new treats at Tim Hortons and this is my honest opinion.

This was the first out of the lineup that I reached for and I think that's because it catches your eye the most with the bright pink and sprinkles.

Now that being said, it didn't look perfectly like the photo but that's to be expected.

As for taste, the strawberry flavour hits pretty quickly in the first bite.

However, it fades quick. I personally didn't notice any strawberry flavour in the dollop of icing in the centre. Instead, it tasted like the icing on those store-bought mini cupcakes (if you know, you know).

Also, one other little note about the icing in the centre is that since this pastry has a hole in it, the icing kind of feels like it's slipping through it.

All in all, it's like an elevated version of your average strawberry or sprinkle donut.

I didn't have any strong feelings going into this one but I have to say I was pleasantly surprised. When I first picked it up I had low hopes upon realizing that this started as a basic double chocolate donut, which is one of my least favourites.

One of the reasons I don't like it is because I find it dry; however, the "premium filling" in this one actually solved that problem.

Since it's essentially a donut-wich held together with chocolate frosting, the icing keeps the inside nice and moist (sorry, not sorry).

However, the sandwich vibe is also a bit of a problem because coupled with the hole in the centre, the whole situation feels precarious when you're holding it. In fact, after I was done I noticed a piece that had fallen onto the floor.

Final thoughts on that one is that the taste is nothing new, it's essentially just a double chocolate donut, but the texture is a definite improvement.

This is the one that I was most excited for and I wasn't the only one. The worker at Tims casually mentioned to me that this particular treat was selling the most out of the new lineup. However, the higher your hopes are the further you have to fall.

From the first bite, my thoughts were that it is messy and underwhelming. As soon as I dug into it everything was covered in grains of sugar.

What's disappointing, though, is that I didn't get any of the caramel filling I had been promised. I knew it had to be in there because I could see a blob of caramel on the side where they injected it but even getting halfway through, I hadn't tasted any.

It turns out that the only spot with caramel filling was that one side where it had been inserted in and it only was in about 3 centimetres from the edge.

I had originally been worried that it would be dry but fortunately, this wasn't the case. Still, without that caramel, this is nothing special.

What it is is sticky. I had to wash my hands immediately after eating this before doing anything else so be prepared for that.

With these three very different experiences, it's hard to pick a winner but if I had to choose, I would say the chocolate one surprised me the most.

As for whether I would recommend these treats, that's a bit more simple. In my opinion, these aren't worth running out in -15 C weather for, but if you happen to be at a Tim Hortons already or are craving some dessert, then it could definitely be worth giving them a try!

Another added benefit I discovered when I ordered them was that they are actually available in a "Dream Pack" which gets you six donuts.

The half-dozen retails for $9.99 so it's actually a better deal since the individual ones retail for $1.99 each.

While we're on the topic of price, I do think the almost $2 price tag is a good fit for these desserts.

To conclude, saying these donuts are a dream come true may be a bit of stretch but I really can't be mad at them.

The opinions expressed in this article are the author’s own and do not necessarily reflect the views of Narcity Media.

TRENDING NOW: You Can Stay At This Cozy Glamping Site Less Than One Hour From Toronto (VIDEO)