11 Incredible Photos And Videos From This Weekend's Intense Ice Storm 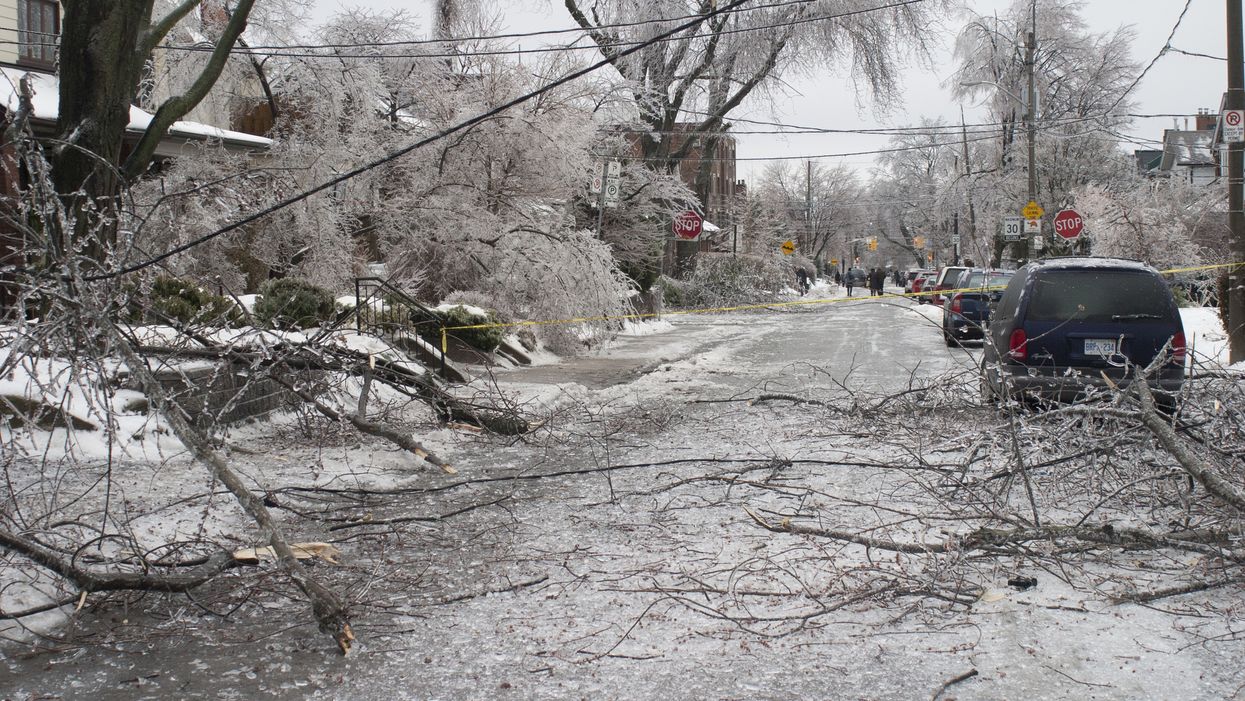 As we're sure everyone living in Southern Ontario has noticed by now the world has turned back into an icy snow globe. This is despite the fact that it is the middle of April and we're usually getting rain at this time, not snow and ice.

As you can imagine the sudden freeze wrecked havoc on the area. There are some people are without power right now and of course with ice comes delays on traffic accidents.

Here's a look at 11 photos and videos from this weekend that show just how bad the whole thing has been. Downed branches are everywhere across the province but this one is just a complete mess. Yes that's a guy using a dog sled to pick up his beer. Have you ever seen a more Canadian photo in your life?

At least someone had some fun this weekend, while the rest of us were miserable.

The #ONstorm continues to rage on and cause significant damage like these broken poles near Dundas, ON. Crews worked throughout the night and they’re back at it again this morning to restore power to over 66,000 customers. Visit our map for updates: https://t.co/q5Wq0lSjWT pic.twitter.com/vx4LP01mTs

Just look at those downed hydro poles, they look like they gave up because it's still winter in April.

#Hwy400 NB and SB closed between Mapleview and IBR due to collision involving 2 CMV’s
No injuries, clean up will last all morning pic.twitter.com/wRnSpodGVS

This truck went THROUGH the guard rail because the roads are so icy.

Luckily no one was injured.

5. Skating in a winter wonderland

What do you do when your ENTIRE street has become nothing but ice? Honestly it looks like a perfect ice rink, you'd be tempted to skate on it - like this Ottawa local did. Just look at all the ice on those trees! It's easy to start thinking that this is still February and not the middle of April. Canadians are made for the cold - and no one exemplified it more than these golf enthusiasts who weren't letting the weather keep them from sharpening their swing . Much respect here.

The ice storm continues to cause extensive damage across the city. Shout-out to our crews for working tirelessly in very tough conditions. Also a big thank you to our customers for being so patient-we know it's not easy being in the dark. #ONstorm pic.twitter.com/osYYrMHkIy

More hydro lines down, but these looking incredibly unsafe seeing as it appears they landed basically on top of someone's car while they were driving! That swing seat doesn't look at all safe for a small child. Looks more like some kind of torture device out of a horror movie.

If you think the weather was bad for you this weekend just be happy you didn't have a tree fall on your house like these poor people did.

Snow and ice falling off the roof of the Rogers Centre. Luckily no one was under it but wow nature is scary sometimes.

So if you're going outside today be careful of downed hydro lines, snow and ice falling off buildings, trees and branches crashing down.

Not to mention the slippery sidewalks.

Are we sure it's really April???