Take advantage of this winter wonderland! 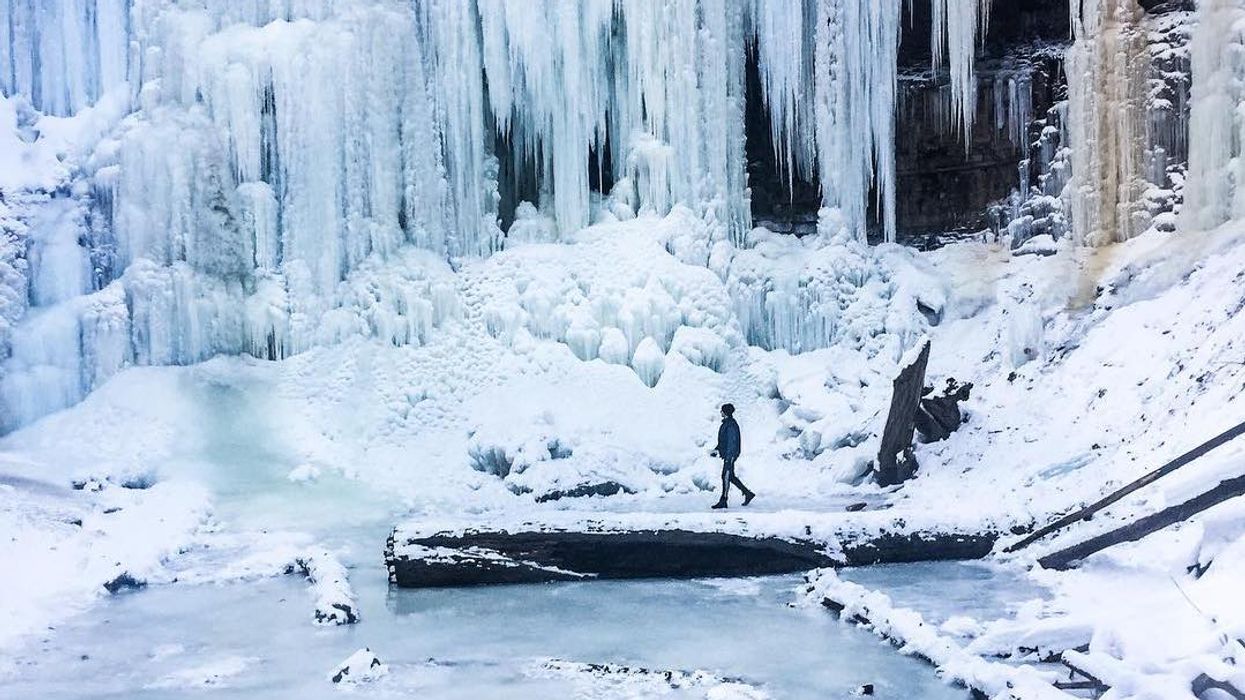 Okay, so yes, the cold sucks. We’ve all been over this: we as Canadians shouldn’t be used to -25-degree weather. I mean, the nerve of you, Canada! And it specifically sucks right now, as I sit in my house writing this article with purple hands because the warmth of my room can never compare to the freezing temperatures outside. Indeed, winters are no fun, but in the cold there remains a possibility of it being sort of, maybe, kind of beautiful… I think.

While this kind of weather makes you want to hibernate until the Canadian season ends in mid-May, the below zero temperatures do tend to make our nature scene quite magical. With frozen lakes to ice sail upon and specialty coffees to keep up us somewhat satisfied, there’s another winter treat that makes the season somewhat bearable - the beauty of our province’s frozen waterfalls, and we’ve compiled a list of the top 14 ones to check out during this winter wonderland.

READ ALSO: The 14 Most Canadian Things To Do This Winter In Ontario Inglis Falls is definitely one of the most stunning waterfalls of the three that surround Owen Sound. You can witness the beauty of Inglis Falls for yourself through the Bruce Trail or the Inglis Falls Conservation Area. Located in Dundas, which, yes, is still part of the Hammer, Borer’s Falls is a 15-metre high waterfall near Borer’s Creek. Quite the picturesque scene, you can most often find pictures of the waterfall on postcards - you know, if people send postcards from Hamilton, that is. Albion Falls is seriously one of the most beautiful waterfalls I’ve ever seen (and yes, I’ve been to Niagara Falls multiple times. I ain't playing!) Quite small scale yet in a totally classy way, the Albion Falls can be found during a hike through the Red Hill Valley trail. Situated at 22-metres high, Felker’s Falls is in yet another subdivision of Hamilton called Stoney Creek. Available through the Bruce Trail, you can get both a view of the falls and Lake Ontario.

Located just off the highway in Grimsby, the Beamer Falls Conservation Area is ideal to hike during any time of the season. Featuring relaxing and moderate trails throughout the area, the Upper and Lower Beamer Falls can be found frozen and beautiful during a hike along one of their many paths. If I hear one more person claim that Tiffany Falls is in Ancaster and not Hamilton, I will snap. Snap! Sure, the territory war between Ancaster and the city of Hamilton is just as real as the one between “Up the Mountain” and “Down the Mountain”, but can’t we all just share for once? Waterfalls and all?

An outdoor experience that is oh so conveniently found off the 401, the Hilton Falls is a 10-metre waterfall surrounded by various hiking trails. Located in Campbellville, the falls’ conservation area constitutes 645 hectares - so leave your phone at homes, kids! This one's a wilderness retreat.

Located in the good ole (and freezing) capital of Ottawa, Hog’s Back Falls is actually officially known as the “Prince of Wales Falls”, but Canadians don’t always need to follow the rules of the Monarch. Situated on the Rideau River, the falls are where the Rideau Canal splits from the river.

Located 30 kilometres west of Thunder Bay on the Kaministiquia River, Kakabeka Falls is a 40-metre high waterfall that looks almost so friggin’ fluffy in when it’s frozen *cue the Despicable Me gif.* Algonquin Provincial Park is filled with paths that lead to waterfalls. Some of the more popular waterfalls are the ones along the Madawaska River, which can be found during a hike along the Track and Tower Trail. Okay, I know, I know. How mainstream am I, right? A total cliche. But hey, as popular and touristy as Niagara Falls is, we can’t deny why it’s one of the most beautiful places in Canada. With three waterfalls that cascade the horseshoe, some of the surrounding water even freezes in the winter time, which is way more insta-worthy if you ask me. I can’t be the only one who thought of buttermilk pancakes when reading the name of this waterfall, right?! Located, again, in Hamilton - it’s called the Waterfall Capital of the World for a reason, guys - the Buttermilk Falls can be found below Oak Knoll Park.