19 Signs You Grew Up In Yonge And Eglinton

It's Yonge and Eg. 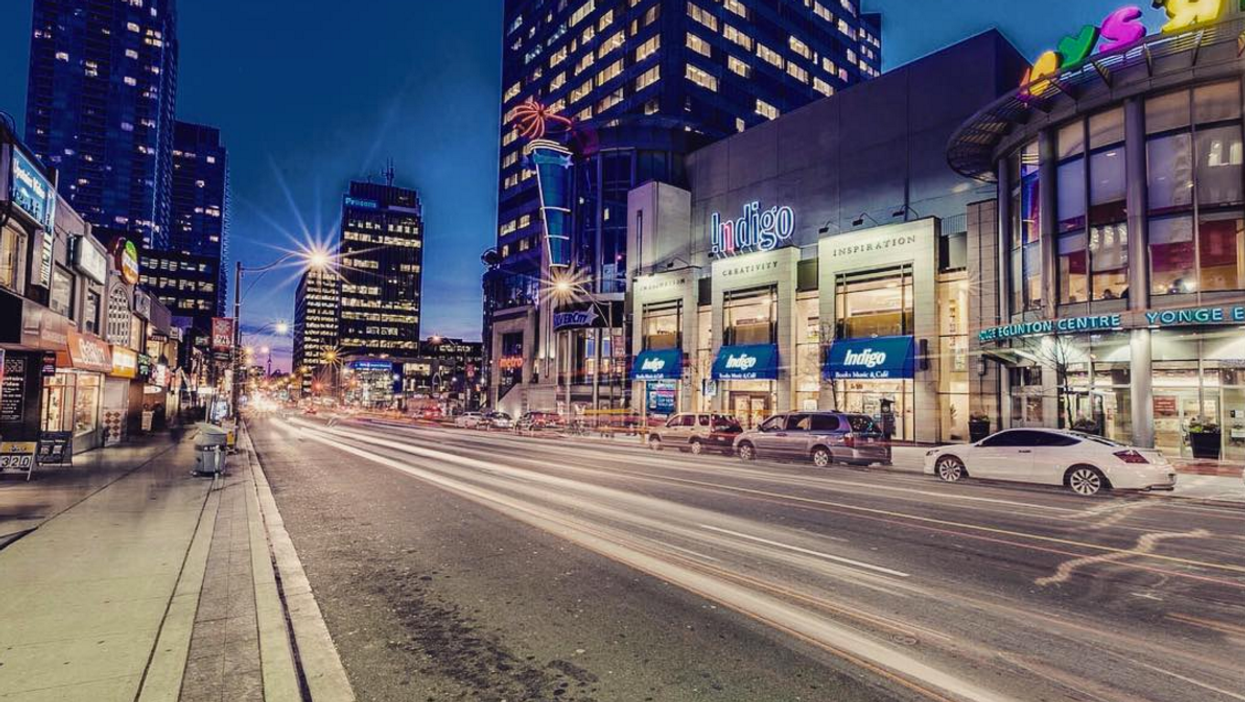 Yonge and Eglinton has quickly become one of the most interesting hybrid neighbourhoods in the city. It's nothing short of bustling. Business people and soccer moms alike line up for their over priced macchiatos, and awkward teens tackle the world of first dates at the famed Cineplex theatre (mom, drop me off like a block away!).

It seems that our once tame corner of the city is starting to draw some major attention. Sure it's always had the classic business offices, staple Starbucks and Tim's on every corner, and some oddly specific stores like Floor Play (the sock store). But now people are finally recognizing that the place that is (literally) the centre of the city, is the place to be. The mark of this gentrification? Freshly squeezed juice bar on every corner? Artisan coffee shops with kick ass latte art?Big name brands setting up shop on our little hill? Looking at chu' Drake General Store and Boutique Beauty Bar.

And even though it may not be what is used to be, we welcome the change. It's making our pocket of the city stand out as something more than just a residential hub, we got hype now! SWEET JESUS is coming to us. There's things going on here, and for the people who grew up here? There's things that we know all too well.

Those 2 syllables are just SO extra! It's like saying ToronTOE, you get me now.

2. You're still working on a way to make a candle out of the smell of the subway Cinnabon store so you never have to go without it

Because what says I'm home better than a gooey pastry? It's excessive, comforting and the only way we know we're really home when we step off the TTC.

3. You had you're first real heart break when the What A Bagel closed for, surprise, condo construction

It COULD NOT just be me that misses the convenience of of getting my hands on a smoked salmon bagel ft. 5 of their cookies? Don't lie to me.

4. You played in LPAA or North Toronto Soccer

I don't know how a 5 dollar jersey can make someone feel way like a professional athlete. But there was something about throwing on that bright yellow Brazil team jersey and grabbing that coveted 6th place ribbon that made me feel alive.

5. Chipotle was a God send

You saw the signs. You knew it was coming. And when it finally opened you happily filled your belly with a burrito bowl the size of your face. It was one of the first quality chain restaurants we had and I don't think the people of Yonge and Eg have ever been more excited about Mexican Food then when it comes in a customizable bowl form.

6. If you remember a time before construction- it must have been somewhere else

Even though I had pictured more a Beyonce/The 1975/One Direction vibe to the soundtrack of my life, anyone growing up in Yonge and Eg knows that it's bound to be drills and tractors instead. There's at least 20 projects (of solely condos) that are starting to go up in the next couple years. Add that to the drastic reemerging of the intersection that was once only marked by that weird ball/structure on the movie theater, and we're pretty much Bob the Builder's fantasy.

7. You know the lunch crowd around Yonge and Eg is a weird mix of men in suits and teens with too much eyeliner

North Toronto, St. Clements, and Canadian Tire Office employees/students alike unite! Only here can you hear a mix of "So my Thursday meeting was actually moved...." and, "NO! I just lost my streak with Paula! We we're at 90, ugh my life!".

8. You're first date was at the Cineplex

Whether it's a gender neutral rom com or a Valentine's day screening of the latest die hard (yes this happened), why oh why do movie dates even exist? Do you talk? Would that annoy them? Oh shit, there's a sex scene. Play it cool. Wait do we sit at the back? What do I even do with my hands! You pondered all these extenstial thoughts before while trying to kill some time; and by kill time I obviously mean make it seem like your mom hadn't just dropped you off too early so you had to make it seem like you're late and ~chill~.

9. You know De Mello Palheta or Himalayan Java are THE places to go to get your caffiene fix

From the adorable family run Himalayan Java to the alternative (but not off the grid enough to deter the mainstream customer) vibes of De Mello, you went (and still) go here. And if you didn't? It was one of the Starbucks on every. single. corner.

10. A classic Saturday afternoon was hitting all the shops between Sporting Life and Cineplex with your BFF

It's like a weird form of a booty call. Not as adventurous as a trip downtown, but still exciting enough to switch up your day. It's 2PM, you're sitting at home and you get a text- wanna hang? The usual?

Your inner rebelious/mainstream clothing conniseur was overjoyed. You didn't just have to hang around the Indigo anymore waiting for your friend, you didn't even have to go downtown to get some more film for your instant camera!

12. You're Sunday mornings we're either spent brunching at Uncle Betty's, The Sunset Grill, or BOOM breakfast and co.

You'll wait 1 hour for that ultimate grilled cheese from Uncle Betty's. Not just because you're a Torontonian, but because you're a local here. You deserve all the greasy goodness and you know it's worth the wait.

13. You had a birthday party at The Mandarian

Where else is your 13 year old going to feast on pizza and crab legs?! It was a necessity. And you looked pretty fly in that shrug from Ardene's, you were on top of the world.

14. You had a ~scandalous~ hook up in some weird staircase in the Yonge and Eg centre (and then ran back to the movies to tell your friends about it)

Hormones are going, dares have been dealt, parents are home and the only place you could find was beside the Toys R Us. A little rachet way to get some street credit, or get some weird disease (why you hooking up in the bathroom, do you know what people do in there?!).

Does that thing even exist? We all know the struggles of running after that rectangle transportation only to be left stranded at the corner. You better grab a seat because it's going to be at least another half hour.

16. You get freaked out when you leave Yonge and Eg and don't recognize people walking down the street

When you spend most of your day around this little hub, you start to recognize people. Even more at Yonge and Eg because of the amount of families around here, people tend to be bound by the schedules of school, soccer game, violin practices etc. Be it your local barista, the local running crew or the resident student crew who have their 5 pm Timmies hangout; it's home and it's weird to leave.

17. You went most of your life without realizing that that Chinese Restaurant on Blythwood actually has a french name

C'est Bon. It's Chinese food in it's most deceptively titled comforting form!

18. You dream about leaving

It's definitely becomes your comfort zone, the hub of dog walkers and baby strollers- and you're teenage angst was just screaming out for some King West vibes.

19. ....But you can't actually imagine living anywhere else

Condos are growing like an athlete on steroids, juiceries are becoming more common than water, there's theatres, coffee shops and boutique stores galore. And it's you're home. You and your squad spent your awkward screaming fan girl days there, the Indigo employees know you, and let's face it; the smell of the Cinnabon can cure any case of wanderlust.