21 Haunted Spots In Toronto To Spook Yourself This Fall

When home is haunted. 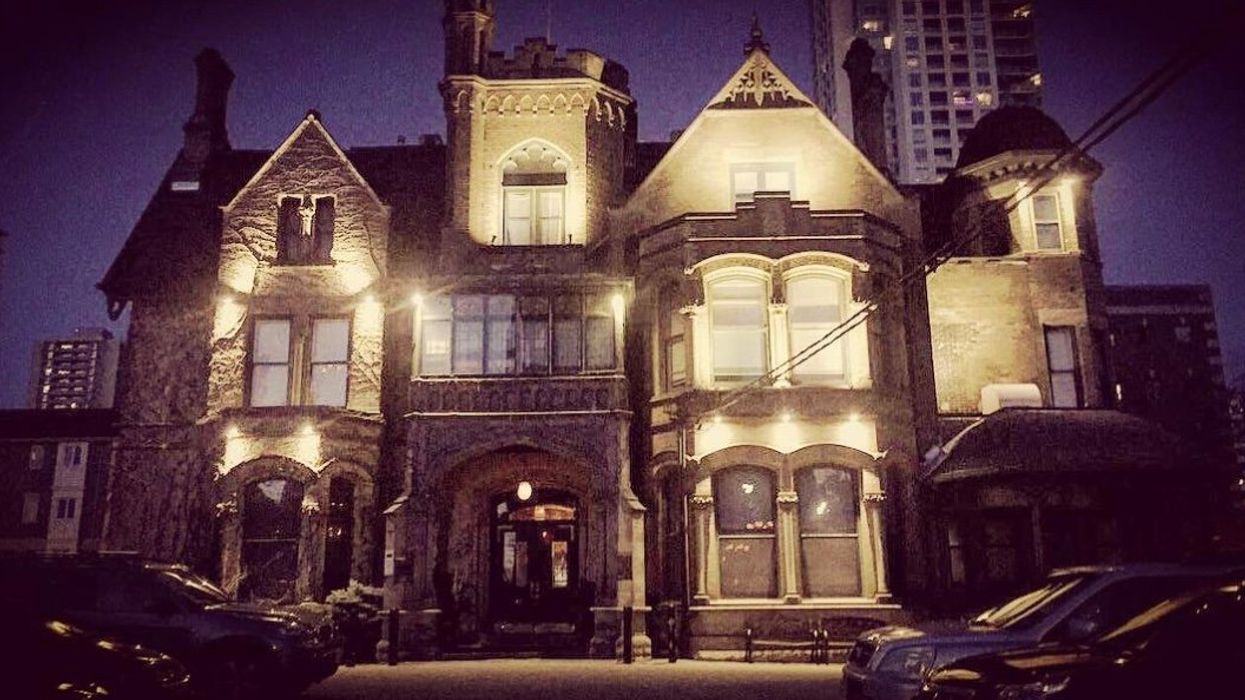 As the weather cools down, the leaves turn brown and the nights get darker, we are easing into the halloween mood. And with that comes a little thrill out of getting spooked.

So if you're into that, and you know you'll be able to sleep peacefully at night, Toronto has a wide array of haunted spots you can check out, or at least know about (for those spots now off limits). Ghostbusters unite!

The Lower Bay Station is now closed after being opened for just a mere six months back in 1966. TTC workers now use the lower station for storage and many have reported seeing the ghost of a woman in a red dress, who appears to be floating and legless.

Fort York was once home to the Battle of York in 1813. The battle lasted six hours and resulted in 181 casualties. The bodies have been buried in and around the grounds. The sounds of horse hoofs clicking have been commonly heard, as well as the cries of dying soldiers. Some have even sighted apparitions in soldier uniforms.

The mansion was once home to the Massey family, where Hart Massey's daughter fell gravely ill and died in the home. Apart from that, one of the maids hung herself in the house and a young boy also died in the home after injuring himself on the stairs. Various sightings have been reported by many including the young boy on the stairs which is popularly seen by other children.

Both the Elgin and Wintergarden theatres have had reports of paranormal activity. Unfolding empty theatre seats, hand operated elevators moving by themselves and sightings of a ghostly woman in the lobby have all been cited as official reports. The Wintergarden theatre located above the Elgin, was closed for a period of time and then re-opened 60 years later.

The Royal Ontario Museum is rumoured to be haunted by it's original director Dr. Charles Currelly, who reportedly roams the East Asiatic collections in a nightshirt. Also before the connected McLaughlin Planetarium was closed, reports of a ghostly little girl referred to as "Celeste" in the audience watching the shows were common. Some wonder if her spirit still lurks in the closed building.

Before Old City Hall was just a courthouse, the last two men to be hung in Canada were hung there, in what is now courtroom 125. Judges have reported the sounds of footsteps, tugging sensations on their robes and the moaning sounds of prisoners. The old intricate architecture totally adds to the creepy vibe in there as well!

The Mackenzie house is reportedly still haunted by former Toronto mayor William Lyon Mackenzie. He has commonly been spotted roaming the home by haunt enthusiasts. The home is also reported haunted by the ghost of an unknown woman. Other activity includes the sounds of the printing press operating on it's own and a rocking chair rocking on it's own.

The Colborne Lodge is another old landmark building in Toronto, and till this day there have been sightings of Jemima Howard, a one time mistress at the lodge, staring outside from one of the upstairs windows. She reportedly passed away in that very room back in 1877. Creepy!

The Christie Mansion belonged to William Christie, better known as Mr. Christie (yes the cookie company). The dark story behind his mansion's haunting is apparently that of a distressed mistress. Apparently Christie locked his mistress in a windowless room to hide her from his wife, and she lived in there until she finally went mad and hung herself with a bedsheet from the rafters. Even the cookie mogul had a dark side.

The Grange, which is now a part of the AGO is one of Toronto's oldest brick buildings. Built in 1817, the building has been home to sightings of various apparitions, including a woman in a black dress and a man in a yellow velvet coat.

The history is as rich as the culture in the Distillery district. William Gooderham and James Worts started up the distillery in 1832. It's rumoured that just two years later, Worts' wife died during childbirth, and out of grief Worts hung himself in a well. Paranormal activity such as moving objects and strange sightings have been reported.

Before it was home to Canada's finest hockey memorabilia, the building was once a Bank of Montreal branch. The story goes that a 19 year old banker named Dorothy Mae Elliott committed suicide in the upstairs bathroom by shooting herself. Her cries can still be heard and there have also been reports of flickering lights and the feeling of being watched.

It's no surprise that the Fairmont Royal York is haunted. Given that the hotel is old, there's a lot of history that comes with it. Reports of seeing a grey haired man walk the halls at night have been common, as well as the spirit of an employee who hung himself in the staircase.

This popular spot for gay theatre has had many reports of poltergeist activity, such as strange noises, the sound of footsteps and various cold spots. Many mediums and psychics have sensed the presence of malevolent spirits. Catch a show and maybe you'll notice some strange sounds afterwards!

It is no doubt that the Old Don Jail would be haunted. Most creepy old abandoned buildings either used as jails or hospitals normally end up haunted. But there is no account for a specific number of ghosts present as witnesses have experienced various experiences including sightings of a man with dark hair, cold spots, a mysterious punching bag that swings on its own and more.

No abandoned lighthouse would be complete without a spooky tale. The tale goes that the lighthouse was operated by a bootlegger who was about to enjoy some his brew and was interrupted by to soldiers who wanted some as well. The soldiers then got upset when he refused, they killed him, dismembered his body and apparently buried the parts around the lighthouse. Some say his spirit wanders looking for his lost limbs to this day.

The restaurant which is now a building housing several merchants was rumoured to have been built on what was once a Chinese morgue. After opening and receiving terrible business as well as poltergeist activity, the restaurant closed but then reopened after feng shui was done to prevent more spirits from entering the building. Now there are still reports of poltergeist activity in the restaurant and sightings of a man haunting the bathroom.

The popular college was once a psychiatric hospital, where patients were subject to various forms of torture to cure their mental health conditions. Reports of strong poltergeist activity such as moving objects, loud noises, missing objects and even ghost sightings have all been prevalent over the years.

Massey Hall has heard various sightings of two constant hauntings that remain there: a man who wanders backstage and a woman who sits in the audience. There has been no reports of deaths in the theatre, so perhaps they're just a couple of concert lovers trying to catch a show from the other side. Ouuu spooky!

The University College, is also known as a the founding college of the University of Toronto. During it's construction, the tale goes that both a Greek stone mason and a Russian stone mason got into a fight over a maiden. As they chased each other up to the unfinished Soldier's Memorial tower, one man swung his axe and missed, which caused him to plummet to his death. Rumour has it that he still haunts the campus to this day.

It seems as if every college or university in Toronto is haunted, right? Well add York University's Glendon campus to that list as there have been reports of something called the "ghost of Glendon". It's constantly reported as the ghost of a sad looking woman who wanders the campus.