The City doesn't want you touching it, though. 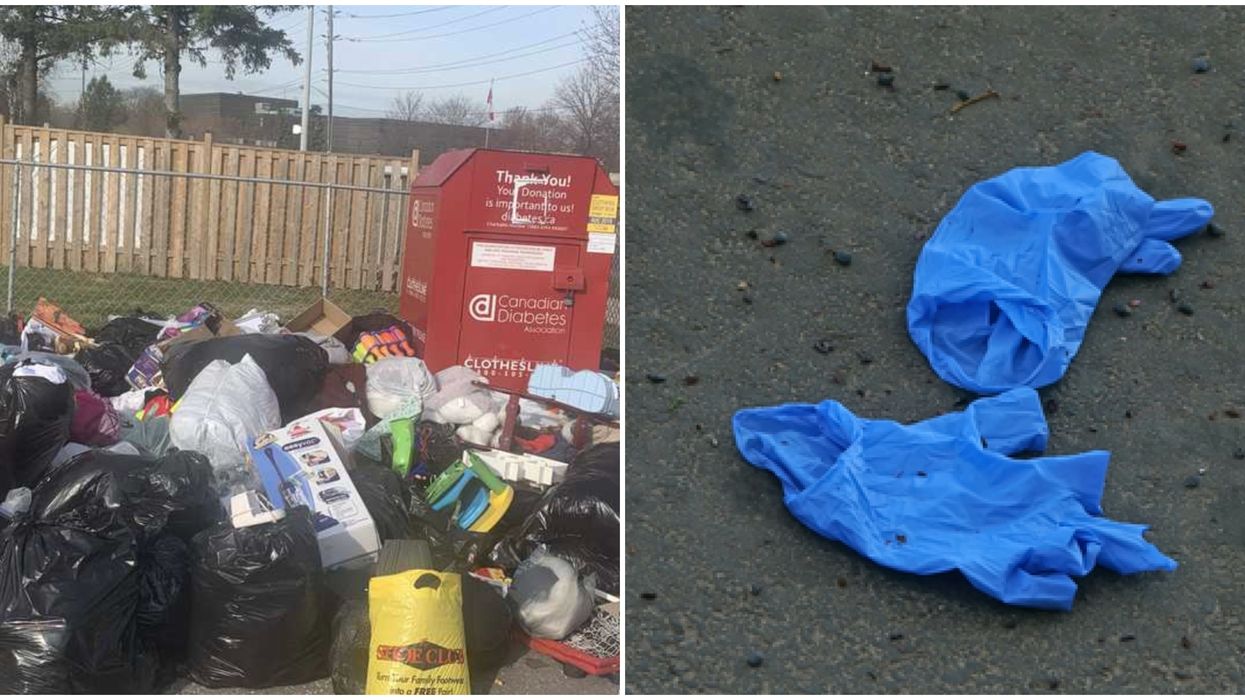 Trash is starting to pile up in Toronto and it seems that the City is struggling to keep up. 311 Toronto has received several photos via Twitter, showing overflowing bins and litter. The City states that they are aware of the problem and encourage people to contact them for cleanup. However, these photos prove that they aren't always acting quickly enough.

Since the pandemic took hold in Toronto, litter has become a worsening problem. Plastic gloves and masks are being discarded in the streets.

Someone on Twitter even shared a photo of a makeshift dumpsite for discarded PPE items. The City told Narcity that "cleanup of the site identified in the tweet is scheduled to take place [Friday] morning."

Mayor John Tory told CTV on April 7 that he is aware of the city's PPE-related litter problem. He told the outlet that this particular problem is "more serious" because these items are touching people's hands and faces.

"There has been an increase in the littering of personal protective equipment, such as masks and gloves in Toronto's public spaces," Jasmine Patrick, a communication advisor for the City, told Narcity.

"The public can do their part by properly disposing of items in the street and park bins available and not littering items on the ground."

The problem is one that 311 says they are aware of, but they ask the public to be patient and avoid taking matters into their own hands, for their own safety.

"The public is asked to please continue to call 311 to report litter hot spots for staff to action," said Patrick.

"In light of the COVID-19 situation, the City does not want the public handling items that have been discarded on the ground in Toronto's public spaces or organizing community cleanup events," she added.

Toronto's Chief Medical Officer Dr. Eileen de Villa also addressed the problem in March. "I ask our residents to observe good behaviour and dispose of their waste," she said.

Toronto has also been dealing with garbage piling up at donation bins across the city.

Even though donation centres are not considered an essential service and bins have not been emptied, many people are still dumping their discarded items and trash.

One particular photo, shared by Diabetes Canada, illustrates how out of control the issue became.

Donation bins are not for garbage. Please do not dump unwanted items at these bins – we are seeking your assistance… https://t.co/UQaskmbwtO
— Diabetes Canada (@Diabetes Canada)1586195405.0

However, Patrick has informed Narcity that the City will be moving forward with its "spring cleaning activities."

These include illegal dumping cleanup, boulevard and laneway cleaning, litter and debris removal in parks, and clearing debris from Toronto's streets.