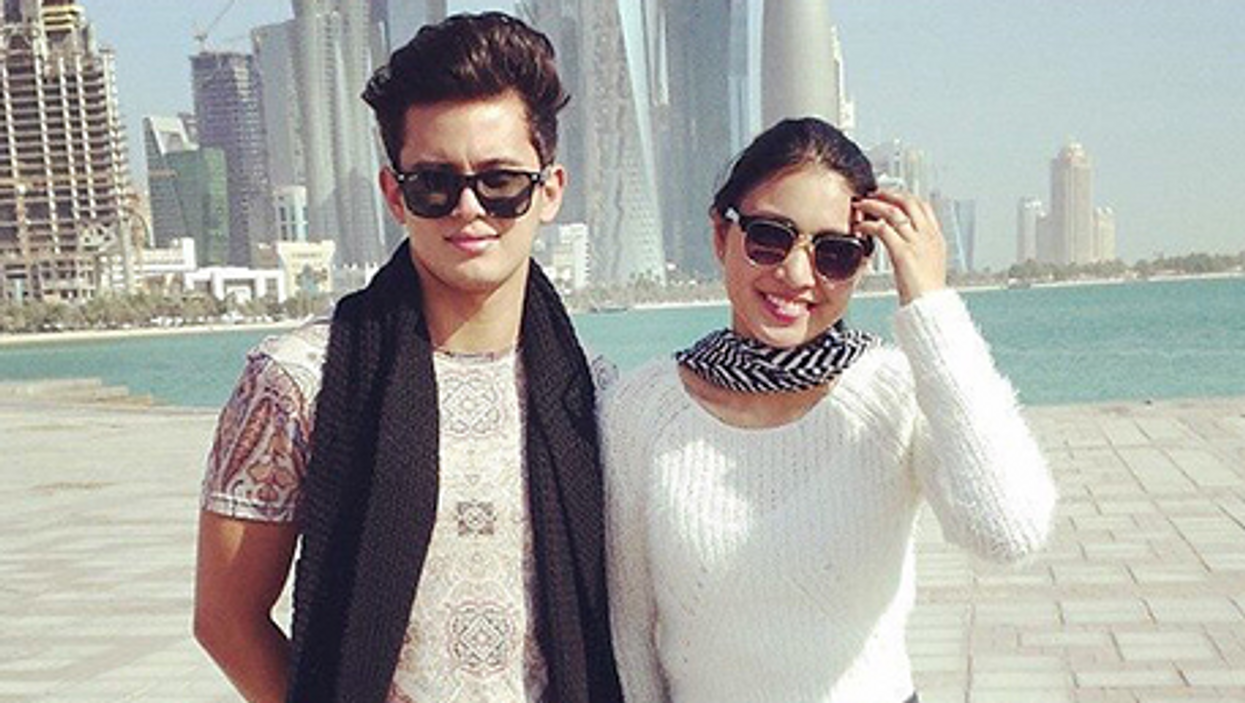 Every culture has a "subset" of vocabulary and phrases used in every day life that are often odd to those who aren't familiar with the language. This is definitely the case for Filipinos. The older generation, in particular, are known for using a mix of characteristic Tagalog and English phrases that may seem bizarre to others. In Toronto, Filipinos make up 3.4% of the city's total population, so you're bound to hear a whole lot of their quirky methods of speech.

The younger generation Filipinos who grew up in Toronto generally don't use the following words and phrases, but they are surely familiar with them (as are those who aren't Filipino but have friends who are). Here are 40 things you'll hear a Filipino say:

Translates to "that thing". When Filipino parents try to explain something to you, they sometimes forget exactly what it is they were talking about.

"CR" stands for "comfort room", which is what Filipinos refer to the washroom as.

"Nak" is short for "anak" which means "child". Typically you'll hear Filipino moms screaming this throughout the house to call the attention of their kids.

Filipinos have a habit of confusing "turn on" with "open". If you visit your Filipino friend's house in Toronto, you're likely going to be asked to "open" a lot of things, like the lights.

This idiom translates to "You're so hardheaded!". However, the literal translation would be "Your head is so hard!" Filipino kids know that when they hear their parents say this, it's about to go down.

"Hoy" is essentially "hey" with an "O" instead of an "E". In Toronto, just one sound of a "hoy" will turn every Filipino's head to the direction where the sound came from.

"Pssst" is used as a call for attention. Just like "hoy", it also turns Filipino heads.

"Aircon" is what Filipinos refer to air conditioning as. If there's one piece of advice I could give about interacting with a Filipino, it is to never mess with a Filipino's aircon.

Translates to "Ouch!!" You'll hear this a lot especially at your Filipino friend's house, whenever his mom is cooking. Like when she gets hit with hot cooking oil while she's frying eggs and spam.

The phrase "bad trip" is used to describe an unpleasant experience. An example of a bad trip for a Filipino would be watching Manny Pacquiao getting knocked out by Manuel Marquez. In Toronto, "bad trip" could refer to an experience with drugs, but the Filipino use of the phrase does not refer to drugs at all.

Translates to "Wear your slippers!". Whenever you go to your Filipino friend's house, you're probably offered a pair of slippers at least 3 times during your visit.

"KJ" stands for "kill joy". Used to describe someone who is ruining the fun. For example, if you go to Bar+ Karaoke with your Filipino friends and refuse to sing a song, you're being the ultimate KJ.

"Cutex" is used to refer to nail polish. Filipinos have a tendency to use brand names to describe items instead of the actual names.

"Home clothes" is essentially the Filipino term for "pyjamas". In Filipino culture, as soon as you get home you change into your PJ's.

Translates to "yes". Not to be confused with "uh oh".

Just as they often confuse "turn on" with "open", Filipinos also confuse "turn off" with "close". It's not uncommon to be asked by a Filipino to close the TV.

Translates to "stupid". If you ever come across a Filipino in Toronto saying this word, you know the tea is being spilt.

Filipinos refer to the TV controller as a "remote". It is also common practice for Filipinos to wrap their remotes in plastic, but I'm not exactly sure why.

"Ref" or "pridgider" means "refrigerator". A typical Filipino's fridge is always stacked, especially after a big holiday, because Filipinos go all out when it comes to food.

20. Put on da sunscreen, you're gonna get dark.

Filipino parents tend to get upset when their kids stay out in the sun to long. This goes back to the concept of mestizos - Filipinos generally idealize lighter skin over dark.

"Susmariosep" is an amalgamation of the short forms of Jesus, Mary and Joseph. It is another way to say "shoot" or "darn". It's yet another word that you'll probably hear while a Filipino mom is cooking.

Filipinos refer to toothpaste as Colgate. Even if the brand they use is Crest or Arm & Hammer, they'll still call it Colgate.

Translates to "over there". This phrase is usually accompanied by the pouting of the lips to the corresponding direction.

"Tarantado" means "foolish" or "annoying". Filipino parents like to whip out this phrase during arguments with their kids.

Translates to "do what you want", but not used in an encouraging sense. Usually, Filipino parents will say this when they give up in an argument with their kids (sike, they never give up!)

Translates to "what the heck!!" It's basically a reactionary statement made by Filipinos.

Filipinos refer to "blackouts" as "brownouts" instead. In Toronto, whenever there's a power outage, Filipinos will call their Filipino friends on their cell phones to ask if their areas also have "brownouts".

PNB stands for "Philippine National Bank" and they have various locations in the GTA offering remittance services. Filipinos are very family oriented, and they tend to send money to their relatives in the Philippines often, so you'll often hear them say they need to go to PNB.

Translates to "Oh my." As in, ay nako, what are you going to do wid ur lipe?

"Yelo" means "ice" in Tagalog. And "red" refers to the yolk portion of an egg. Really.

"Mano" translates to "bless". If you've ever seen a Filipino take an older Filipino's hand and touch their forehead with it, they are blessing, or "mano-ing", their elders.

Translates to "what" or "come again". Sometimes, Filipinos use it multiple times because they can't hear you.

"Exkyos" means "excuse". Like "ha", Filipinos will often say this multiple times when walking in front of the TV while people are watching.

Filipinos tell people to "compress" so that they will be in frame for a picture. Filipino families are so huge that they really do need to compress during photos.

This is another phrase used when taking a photo. It's a reminder for individuals with bellies to breathe in so that they look slimmer in the photo. Filipinos care about appearances!

"OA" stands for "over acting". It's similar to the Scarborough slang term "extra", meaning overly dramatic.

Filipinos say "ahh-ching" instead of "ahh-choo". The "ching" part usually echoes through the house when your parents sneeze.

"Hamboorger" is the Filipino pronunciation of "hamburger". You'll hear Filipinos say this in fast food chains across Toronto.

If you enjoyed this article, make sure to check out my other posts on Filipino culture:

11 Reasons Why You Need A Filipino Boyfriend In Your Life

The 10 Best Filipino Restaurants In Toronto

40 Struggles Of Being Filipino In Toronto