46 Signs You Grew Up In Bloor West Village

The less hipster version of Roncesvalles. 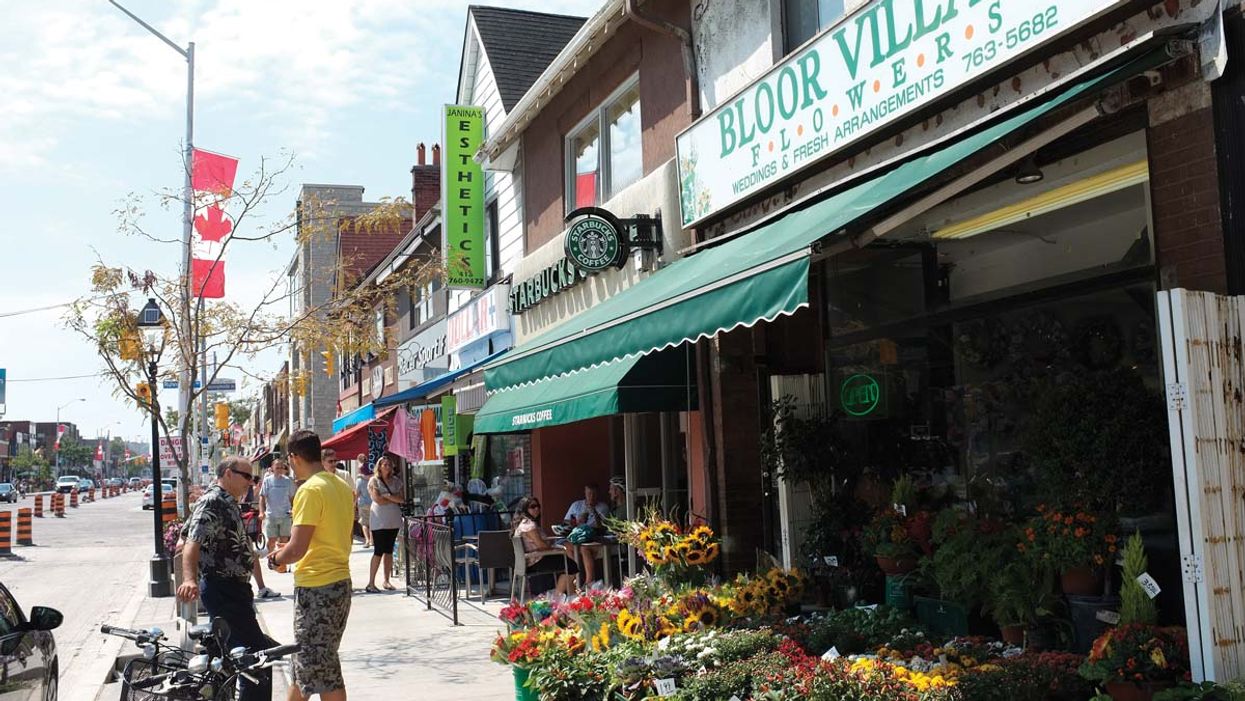 Ah yes, Bloor West. The cute little stretch between Jane and High Park stations that isn't as bougie as Baby Point but less hipster than Roncesvalles. The home of Eastern Europeans and all of your high school friends. No really, all of them. Literally everyone.

If you took a 10 minute walk down Bloor right now you'd see your high school ex, his friends, his new girlfriend, that weird kid from History class, your homeroom teacher, and the cafeteria lady. Here are the 46 signs you grew up there.

1. You will never forgive Shoppers for replacing the Chapters.

Like, ever. Why couldn't they stay at the other location and sell lipstick and hair removal creams there? Why did they have to invade with their fluorescent lighting and refrigerators stocked with Vitamin Water? The old Chapters was freaking legendary. It had an antique theatre, for Christ's sake. C'mon.

2. Also, you remember the Laura Secord and you are 100% pissed it's a Hakim Optical now.

Cute Hallmark cards and craft chocolates over glasses any day.

3. You've been to Shakespeare in the Park maybe once.

"You're so lucky you live so close to High Park! You could go see Shakespeare every day," everyone says. And then you shuffle awkwardly and admit you went that one time your mom dragged you.

4. Also, you know High Park during cherry blossom season is the worst idea ever.

Nope, I'd rather not get pushed by hoards of people taking selfies with pink flowers. I'll admire them from a far, thank you very much.

5. The Runnymede Starbucks is your second home.

It's the best place to catch up with old friends, complain about boys, and do group projects/any kind of work. Also, one of the baristas is really cute.

6. And Baka Cafe is your mom's second home.

If you're wondering where she's been for the past six hours, it's Baka. Moms, as it turns out, also have friends. Who, I guess, they talk to about mom-related stuff.

7. When you walk by JC Salon with a friend outside the area, you remind them Style By Jury was shot there.

Ah, youth. Whenever you see those cheery youngsters, with their baseball caps worn backwards and jeans worn too tight, it takes you back to a simpler time. When you were also at that McDonald's at 10 p.m. on a Friday, waiting to go to some house party three hours away. But it was, like, totally worth it.

9. You either went to Humberside and wore Uggs every day.

Rain monsoons didn't stop you, nor did 45 degree weather in June.

10. Or went to Western Tech and made running jokes about the soft Humberside kids.

Let's go to a Humberside jam! Lol jk, I'd rather not watch a group of preppy white kids get drunk off two shots and talk about their honour roll standing.

11. You know Lithuania Park has the best tobogganing hands down.

Because what could possibly go wrong when you put together booze and toboggans?

12. The Rogers Plus wait time is approximately 2-4 years.

13. You remember when the TD Bank didn't have the second floor.

14. Bread and Roses has the best pierogies.

It had super cool tattooed baristas! Who served you really good Americanos! And there were so many cool books! And a chalkboard to draw on at the back! Sigh.

16. As a kid you were pretty bummed you couldn't sit in the downstairs smoking area of Swan and Firkin.

Remember when smoking was allowed inside?!

17. The Kennedy Public House is your go-to for bloody Caesars and hungover brunches.

Hi, I'd like a Caesar with a double shot, bacon, eggs, pancakes, and a side of bacon.

18. You get down with Yogurty's on Saturdays.

Although, you wish the cups were a bit smaller. So you wouldn't have to accidentally spend $20 for frozen yogurt with a couple of sour keys on top.

19. Biking down to the lake through High Park is your idea of a good time.

20. If you went to Swansea, Rennie Park will always be a hilarious reminder of bush parties and preteen hook ups.

Second base under the gazebo, amirite?

21. Being an adult and going to the LCBO is really satisfying.

22. You hope the guys at Pizza Pizza don't hate you too much for yacking in their washroom.

In your defence, Saturday nights sometimes — ahem, always — got way out of hand. Before you knew it, you were scarfing down an XL pizza and then cradling a toilet.

23. You remember when the M for Mendocino first opened and how it was the first ~cool clothes~ store.

24. You don't go to System Fitness anymore because you've moved onto bigger and better things.

25. You know that all the bars on Bloor are lame and filled with old men.

But they were pretty much the only option in high school.

26. However, there are some exceptions.

27. You're really happy about Humber Theatre.

You can walk to the movies in sweat pants, hair tied, chillin' with no makeup on. Which is pretty dope.

28. You went to Doreen Hayes School of Dance.

All the while knowing she was batshit cray.

29. Bloor Jane restaurant has the best breakfast food hands down.

30. The Coffee Time at Jane is sketchy and wonderful.

Fun to grab a coffee during the day, not fun to walk by at night.

31. There are so many amazing European bake shops.

Although it's not technically Bloor West, it still has a special place in your heart. The same waiters have been serving you the same desert option your whole life. You sometimes look at the menu and pretend to be inspecting all the different options but in reality, you get the same thing every time. One Tongue Depressor on a waffle, extra strawberries please.

33. You went to Vescada that one time your mom paid for it.

Now that you're an adult and it's your own money, spending $300 on hair just doesn't seem right.

34. You welcome cool new places like Fat Bastard Burrito and The One That Got Away.

But also laugh because it's cute when Bloor West tries to be hip. We all know it will always be the family-centric, European-soaked neighbourhood it is.

Who knew 15kg of chocolate was so expensive?

36. You remember going to The Body Shop on your high school lunch breaks.

Everything in there smells so good!

39. When you go to The Works, you cancel all other plans because you know you'll be in a burger coma all day.

40. Mac's has everything your munchie-craving heart desires.

42. The old men in front of Runnymede Public Library are the worst.

43. You used to buy stickers and fancy paper from Bizzy B's.

Even though you didn't know the first thing about arts and crafts.

44. You sometimes peer into the townhouses at 1968 Bloor St.

And picture yourself living there.

45. When your friends come over, they're like, woah, this is like the suburbs but in the city!

46. And you're like, damn straight, it's the best area in Toronto.