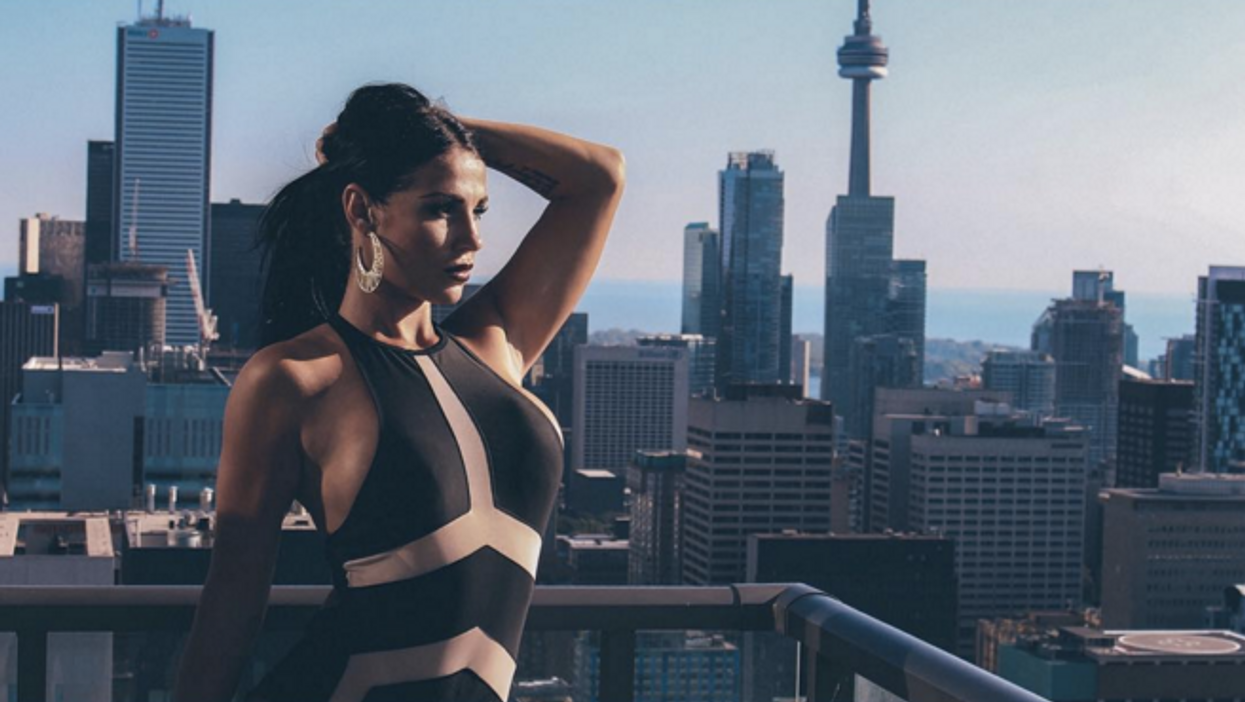 Hopefully by now the holiday hangover has subsided, and you’re getting ready to make 2016 your best year yet!

Only one problem – did you know that only 8% of people actually end up meeting their new years resolutions? This year, Gymnut, a Toronto-based fitness startup that has been called ‘the iTunes of Fitness’ and recognized as one of the four Canadian startups shaping the future of fitness, took a slightly different approach.

They launched a social experiment called #Gymnut2016 – aimed at bringing together a community around their goals for the new year, as an opportunity to stay focused, motivated, and on the path to (more) success.

Because Toronto is the best city in the world, we’ve compiled a list of 8 movers and shakers that make our city so great and asked them a few questions of our own: what was their biggest achievement of 2015 and what can we except from them in 2016.

These people are at the top of their game – find out why, and what 2016 holds for them. Stay inspired!

Joseph is a respected entrepreneur/fitness model, and is the CEO and co-founder of Umoro. Umoro is a leader in high-end fitness products aimed at revolutionizing health and wellness, providing you with all the tools you need to meet your goals, and become the best version of yourself.

Biggest achievement of 2015: I would say the most significant achievement would be that we have managed to scale Umoro from nothing to become one of the top fitness brands in just under 3 years.

Biggest goal for 2016: My goal is to launch our next two product lines and further cement Toronto as the innovation power house it is on a global scale.

Amer is one of the most influential figures in the fitness industry, having accomplished pretty much everything you can think of. He was awarded the prestigious ‘Personal Trainer of the Year’ by World Physique Magazine in 2010, became the world’s younger pro fitness model at 22 years old, and has competed and placed in the worlds top fitness competitions, including a 4th place finish at WBFF.

Biggest achievement of 2015: I have had several large achievements in 2015. The launch of my brand ‘The Mind Builder’, that includes speaking engagements, self-development content, seminars, and products. The second would be the great amount of success we have had with Hammer Fitness clients across the world. We have had tremendous amount of success on and off the stage, including many overall men’s physique and bikini titles, as well as another IFBB Pro on the roster.

Biggest goal for 2016: To continue doing what I have been. I consider myself a train and I like to steam roll ahead with my goals. I will continue to build both Hammer Fitness and The Mind Builder, add more IFBB pros to the team, hire more coaches under Hammer Fitness, speak in several cities/countries and by the end of the year, get my charity Flex for a Cause off the ground.

Hussein Dhalla is an up and coming fashion designer from Toronto, and is the founder of DALLA. DALLA is a contemporary menswear brand founded in 2012, under the name HD Homme. Since then, HD Homme has been renamed as DALLA, and features ready-to-wear collections that have been showcased on runways at World MasterCard Fashion Week and Toronto Men’s Fashion Week, as well as red carpets across North America.

Biggest achievement of 2015: My most significant achievement of 2015 was definitely spending time with The Weeknd during the American Music Awards weekend, where I was able to sit with him and talk about all sorts of things, including fashion. He then wore head to toe DALLA for P.Diddy’s birthday party and then his own AMA After-Party. Being able to dress such a talented (and Canadian) artist was really a major milestone for me.

Biggest goal for 2016: My biggest goal for 2016 is to really grow by brand, DALLA, and continue to work with talented people like The Weeknd, Nick Bateman, Vinay Virmani, and all the other people who have really supported me. I’ve started a couple new projects so be on the lookout for those as well. I have a few goals that I really want to accomplish this year, but I’m going to keep those under wraps for now.

Ashley Hassard is a Toronto based model, actress, philanthropist, motivational speaker, and certified teacher. Whatever you’re excuse may be Ashley has pushed passed it. She graduated from a liberal arts high school with a specialization in screen arts, is a former gymnastics athlete, and has a passion for giving back to the Toronto and global community, which she has done through a variety of successful initiatives. Most recently, she is also the editor-in-chief of Skyn Magazine, a creative lifestyle magazine.

Biggest achievement of 2015: I wrapped up a nation wide speaking tour talking to kids about the realities of hunger and importance of food security. I brought 25 incredible youth all the way to India to volunteer, and I co-founded Skyn Magazine.

Dwayne founded Body By Chosen in 2009 – a gym located in the heart of downtown Toronto. He is a leader of the Calisthenics fitness movement in Canada; his main training methodology revolves around Calisthenics (body weight exercises) and Boxing. Dwayne is an ISSA Certified Trainer and one of a select in Canada to hold the Calisthenics Kingz certification. Aside from his immense love of his daughter, Dwayne has deep passion for impacting his clients and the youth in the community. His vision: To create an elite team of bar athletes and personal trainers that will change how people perceive health and fitness.

Biggest achievement of 2015: My biggest achievement for 2015 was the grand opening of my first gym and running many successful events, celebrity boot camp classes, toy drives, as well as being in over 5-7 magazines, and on the local news numerous times.

Biggest goal for 2016: My goal for 2016 is to continue to build the Body by Chosen brand, motivate and inspire the world. The main thing that a lot of people don't know yet, but will find out very soon, we are opening 2 more gyms sometime this year and holding many more new events.

Isabel is a Canadian Olympic Weightlifter from Toronto and former Junior Ontario Champion, with dreams of competing internationally. Prior to weightlifting, she was a competitive and performance dancer for 15 years and is also completing her final year of an Architecture degree from the University of Toronto. Since finding her passion in weightlifting, it has been Isabel's mission to inspire and empower girls to be the best version of themselves, and to show girls that lifting weights is not just for men.

Biggest Achievement of 2015: My goal for 2015 was to squat 200lbs. I ended up squatting 230lbs which has helped my overall strength in achieving my weightlifting goals.

Biggest Goal for 2016: My goal for 2016 is to compete at the Canadian a Senior National Championships, as my first year as a senior weightlifter, to increase my ranking for further international competitions.

Paul is one of the worlds top fitness photographers, with over 14 years of experience working with the industries best. During that time, he has shot over 200 magazine and book covers, as well as over 10,000 pages of spreads in magazines worldwide. He has shot the worlds top fitness models, including Arnold Schwarzenegger and Ronda Rousey, and his most notable covers include special edition Playboy’s, and a New York Times Best Seller. He is also known for throwing the heaviest pool parties in Las Vegas and the Caribbean.

Biggest achievement of 2015: My biggest accomplishment for 2015 was the growth in my bootcamp series, STRONGCAMP. We started out with just a few camps in 2014 and grew it to just over 10.

Biggest goal for 2016: We are aiming to more than double the camps. I'm also re-launching ANDIVERO Magazine, which was put on a short hiatus while we all focused on STRONG's launch. ANDIVERO will be like a Maxim meets fitness. I'm also brushing the dust off Shooting Skin (www.shootingskin.com) and looking forward to releasing more episodes.

After spending almost a decade as a personal trainer at GoodLife Fitness, Phil cofounded Fuel Foods in 2011, which is now the biggest meal delivery company in Canada. Over the last five years they have established a reputable brand, and provide meals to some of the biggest names in the fitness industry, including Nick Bateman and Lyzabeth Lopez.

Biggest achievement of 2015: We became official sponsors of the Toronto Argonauts, Inside Fitness, and Fitness Music Fashion, and cemented our spot as a social media powerhouse.

Biggest goal for 2016: Our goals is to expand Fuel Foods nationwide, and tripling our current customer base, becoming a leader in the North American meal prep market.