9 Signs You've Gotten Way Too Comfortable With Your Boyfriend

'Cause the honeymoon phase is overrated. 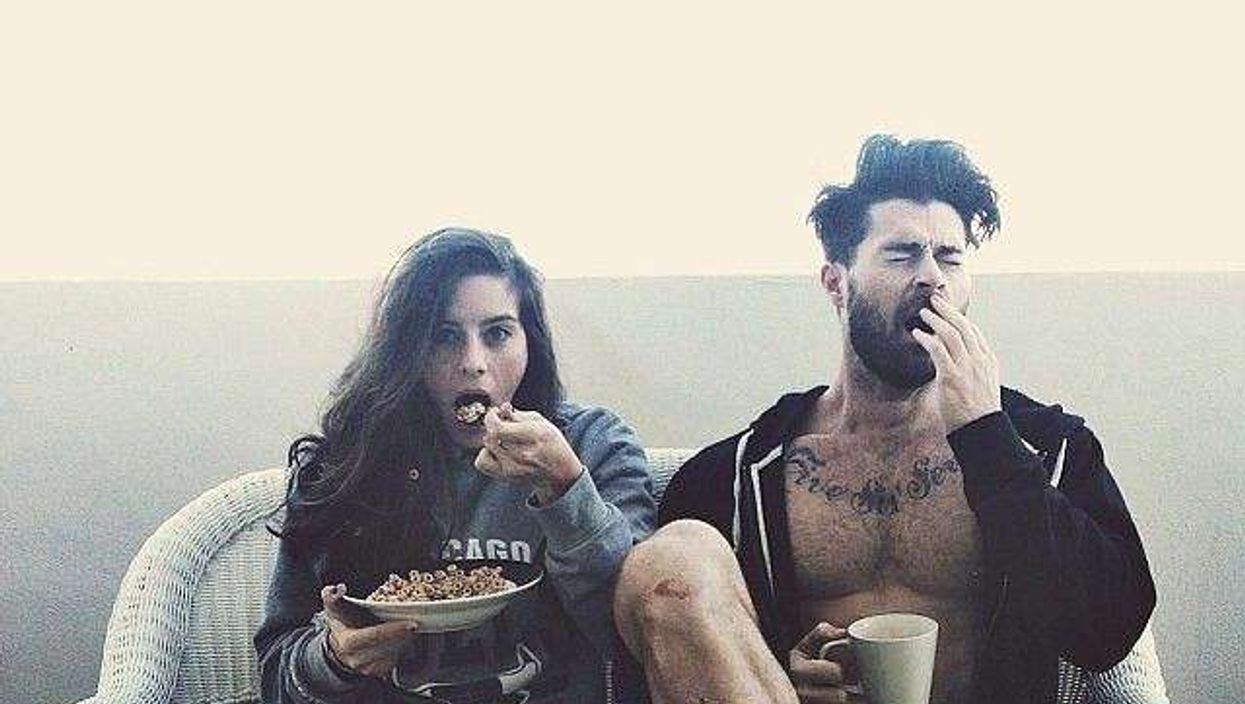 There's very little that compares to the blissful, walking on air type feeling that is the "honeymoon" phase of the relationship. That is, until you get to the totally awesome "so comfortable to the point of being so gross and unapologetically yourself" part.

There's got to be nothing cooler than being able to be 100% yourself around the person you love - even if that person is a lazy slob who can't be bothered to flush the toilet or put on deodorant. So here's to the couples in long-term relationships who just don't give two fvcks anymore...keep on being weird with each other.

1. You're Over Attempting To Look Cute All The Time.

No more perfectly winged eyeliner and flawless skin. Now if he asks you to send him a picture, there's no choosing the cutest selfie of the dozen you just snapped - you have no problem making the grossest, most unimpressed face and hitting "send." If you're really comfortable, you may even send each other pics of impressive deuces you've let drop in your bathroom. There's nothing more romantic than feces, right?

2. You "Borrow" Their Clothes

His hoodies are gone for weeks, months, maybe even years at a time. Or you'll just keep them for as long as you can still catch the faint smell of his cologne. You always seem to "forget" to return them.

3. Pretending That You Have A "Small, Girlish" Appetite Is Doneski

Now you both stuff your faces with take-out and junk food as much as you please. Going out to dinner at a nice restaurant is still appealing, but you would both rather stay in and marathon Game of Thrones while you wait for the pizza and wings to be delivered. You know his favourite flavour of Doritos and he knows never to forget the extra butter on top of your popcorn. It's the little things that count.

Remember those treacherous first few months of dating and holding in farts around each other? The worst, right? At least you got a workout from clenching your butt cheeks together in panicked desperation. Now, you both just let 'em rip.

5. No One Cares About Morning Breath

6. Your Crap Is Scattered All Over Their House

There's an extra toothbrush and a pink loofa in his bathroom, a T-shirt and underwear you thought you had lost that are hiding under his bed, bobby pins and hair ties squished in between the couch cushions, and maybe even some hair extensions lying around. You're not claiming your territory so much as just being comfortable with your inner slob.

7. You Do Your Business With The Door Open

Honestly, I never saw the big deal with this in the first place. But if you've been in a relationship for a while, and you're in the middle of a conversation, is there really a point in closing the door and being forced to raise your voice, or pause the convo? Nah, just leave it open and maintain eye contact with me while I talk to you - like a gentleman. Bonus points if one of you is on the toilet while the other is in the shower.

8. You Have Weird Nicknames For Each Other

Yeah, there's the usual "babe" and "boo", but after some time that shiz gets stale. New nicknames might stem from inside jokes you both share. Some standout nicknames from previous bfs include "shit stain" and "chicken nugget". Get creative, guys.

9. Kissing While You're Both Sick Isn't A Big Deal

When you're in a relationship and one of you gets sick, it's a pretty sure thing that both of you will soon be plagued by said illness. This is simply because, although you both know that kissing someone who's got snot dripping from both nostrils is a bad idea, you still do it anyway. Soon you'll both be gross and phlegm-y, and you can both engage in gross, phlegm-y sex. Score!