Tyson's fur baby even joined in, too! 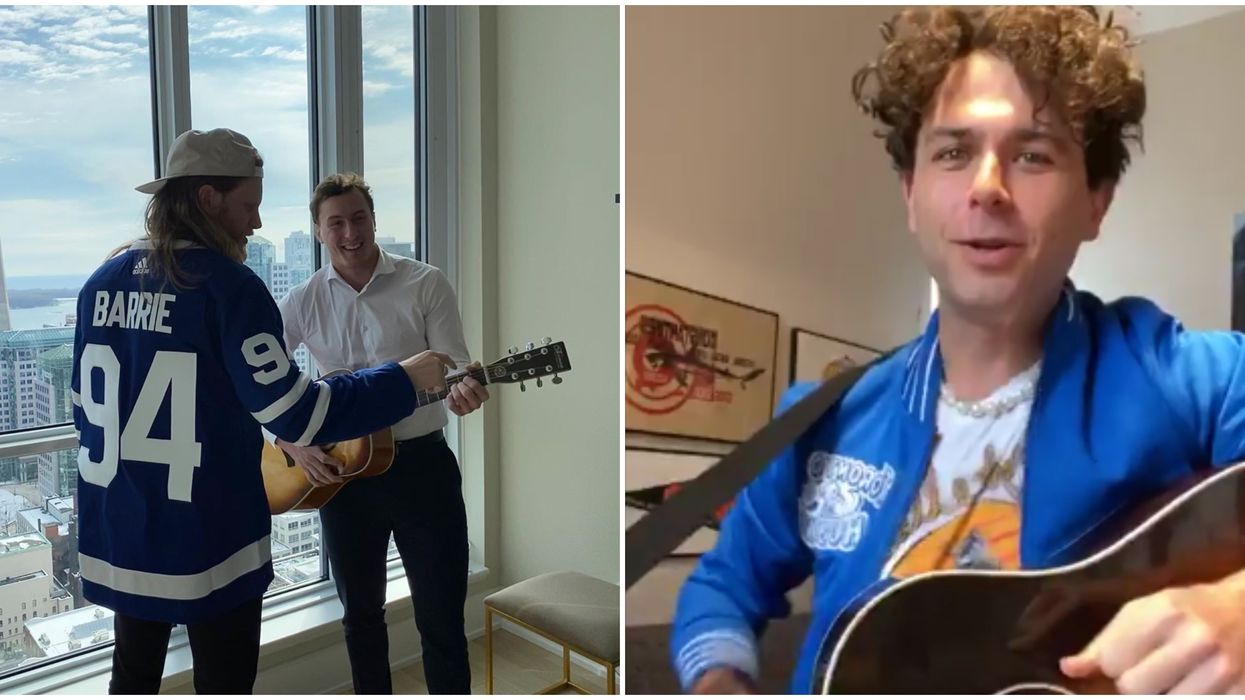 Is hockey back yet? If you’re feeling lost and confused without your favourite sport to keep you entertained right now, don’t worry. Tyson Barrie joined Arkells' live stream today to share workout tips, give a Leafs' COVID-19 update, and, of course, show off his adorable pup. So, if you’re seriously missing puck right now, this one’s for you.

Joining the Hamilton, Ont. band's Instagram Live video, the 22-year-old Leafs player said that as far as home-workout equipment goes, he actually doesn’t have too much going on.

“We’ve got a peloton, so I've been hammering a couple classes,” he shared.

When band frontman Max Kerman asked if the Leafs defenceman had any weights, Barrie jokingly replied: “I’ve got three-pounders, so it’s pretty much all you could handle.”

The player added he’s been doing a lot of squats, pushups and planks as well. (OK, we see you, Ty.)

As for Kerman's own workout, the singer admits he’s been rocking Selena Gomez abs and core videos on YouTube. That's a strategy Barrie admits he’s not quite ready to try.

“I’m only on like day-seven quarantine so maybe after two weeks or something I’ll get there,” he laughs.

When asked how the rest of the team was holding up, Barrie said it was all good.

“Good man, we’re all just kind of hunkered down... Lots of gaming, lots of dog walks.”

He added that gaming seemed to be the go-to, despite not being a gamer himself. Zach Hyman certainly seems to agree, judging by the offer he made to fans on Thursday.

Also making an appearance in the stream was one of the Leafs' selection of totally adorable dogs, Ralph.

Tyson's fur baby was all cuddles and barks throughout the video, no doubt enjoying all the one-on-one time with his doggo dad.

“Ralph is excited for any visitors, digital or not,” Barrie said.

And, if you’re feeling down about missing events, it might help to know this Leafs star is missing them too.

After a Pearl Jam concert was recently cancelled, Barrie and Co. decided to put their band tees on and stream a live concert at home instead.

Who said social distancing in Toronto can’t be fun?

When he’s not munching on his go-to isolation meal (pasta) or attending concerts in his living room, Barrie can be found at home, trying to pump out 100 push-ups in a day.

Between that and Raptor Serge Ibaka’s workout videos, we’re all going to be surprisingly fit by the time the COVID-19 social distancing is over.