A collection of Toronto's TTC sightings, incidents and memorable moments that you wish you could forget. 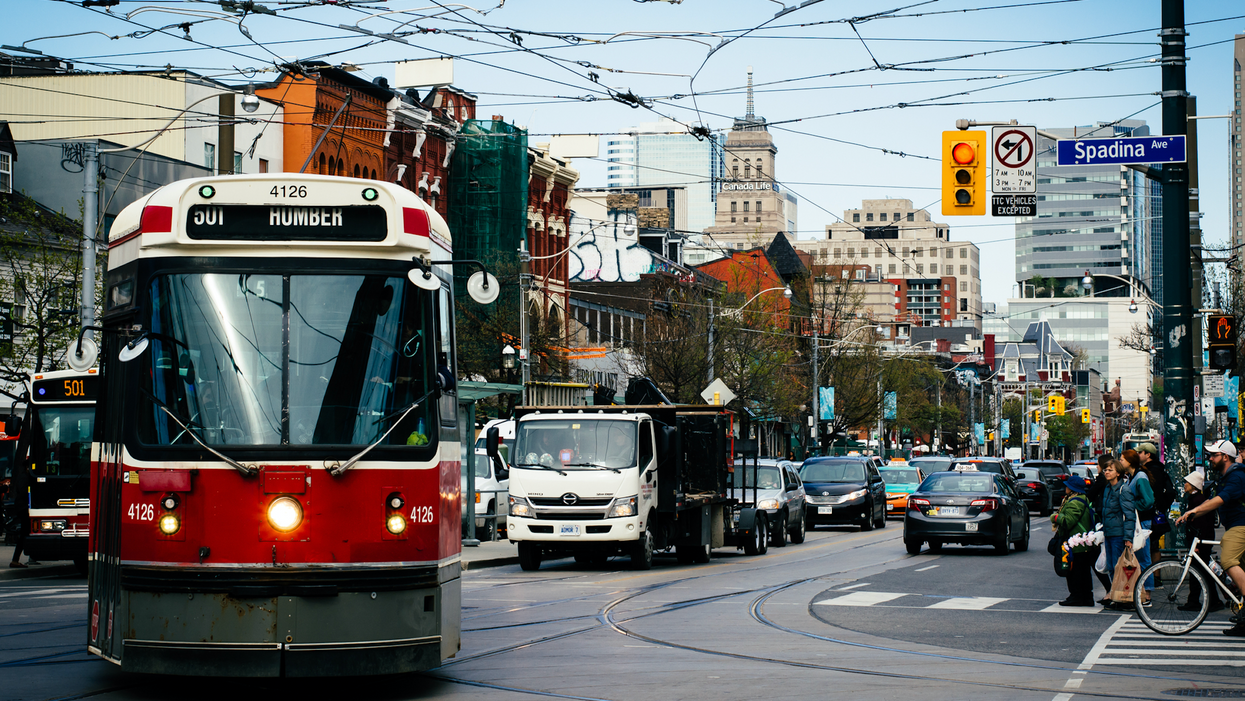 If you're one of the 1.69 million passengers who ride the TTC on a daily basis, you're probably well aware of the fact that Toronto's transit system is far from perfect. Sure, few transit systems in the world are held in high regard by their riders, but the unpredictability associated with riding the TTC's 4 subway lines, 11 streetcar lines, and 149 bus routes appear to only precipitate the tremendous frustration and irritation experienced by commuters around the city.

For those of us who are used to feeling red-hot rage while "riding the rocket", let us commiserate together by participating in our favourite city-wide bonding activity: bashing all the things we love to hate about the TTC.

Below are just a few relatively benign examples of the outlandish occurrences that have been witnessed on the TTC and caught on social media over the past few months:

READ ALSO: A Toronto Man Terrorized Commuters By Swinging An Axe On The Subway This Morning

There is no shortage of inconsiderate people who ride the TTC.  These are the people that you can't help but stare at while shaking your head in silent disapproval.  These are also the people that you side-eye for the duration of your commute, while simultaneously contemplating whether or not it's worth blowing through your savings to purchase a car. Take a look at some of the highlights:

We have stitched together bystander video and TTC surveillance video to show a blow-by-blow breakdown of what happened in the moments leading up to the arrest. According to a report, these fare inspectors were technically off-duty. For the full video: https://t.co/kfpTl88suK pic.twitter.com/saTrwOucms

#ttc employees just finish their smoke break, please note the #nosmoking sign at the right . At Don Mills station. I wasn't aware the rules don't apply to your employees . pic.twitter.com/LT1L4k70Wv

#ttc #lenient416 just wondering what to do with people like her? pic.twitter.com/ahkHjRZOtR

People just don't care. It is a waste of money these educational campaigns. #TTC pic.twitter.com/RmIGRpnSrx

Folks on the #ttc who believe their bags deserve a space while others wait outside in the freezing cold....i just wanna push them out 😡🤬😡 pic.twitter.com/Ncip8yHpVm

ZERO common courtesy on the #TTC won't move her bag for anyone pic.twitter.com/lAsKpz9zOT

Ppl who think its cool to listen to music on speaker 🤣😂..... #ttc #music #sound pic.twitter.com/ciuFW3RYxA

Please don't do this on the #TTC https://t.co/V4ek7V4CoP #Toronto pic.twitter.com/saJKtPAnOL

Of course, we would be amiss if we neglected to mention the downright strange folks that travel on the TTC.  Though it makes for good entertainment, sightings like these can be awfully distracting and disturbing for the average commuter.

im so easily amused on the ttc 😭 she really thought she was on a swing 😩 pic.twitter.com/gFZGloiv78

Someone carried an axe into the Spadina subway station today and was later arrested by Toronto police #TTC #Toronto pic.twitter.com/MAZPkFOkh2

Some just got their haircut on a #TTC subway #Toronto pic.twitter.com/XHrbMe51UC

And who can forget when a woman splashed a man with mop water in front of a TTC janitor, and he retaliated by dumping the bucket of dirty water on top of her? Or when a self-proclaimed "social worker" bullied a homeless man on the subway just a few days ago.

Or when a man suddenly started spraying people on the subway with a fire extinguisher for no apparent reason. Good times.

How about when uninvited (but sometimes cute) animal visitors trespass onto TTC property?

Please look at this beautiful woman I saw on the ttc pic.twitter.com/Xb06RKmYJf

Just some live crabs riding the TTC because Toronto. pic.twitter.com/9QjUvBPgYC

Didn’t get your morning snuggles? Don’t worry, we got u fam #ttc #toronto #TOpoli pic.twitter.com/k2dzVCQNP2

Ladies if he:- leaves you waiting in the cold- doesn't have space for you- frustrates you most morningsHe's not your man. He's the King streetcar. #TOpoli #Toronto #ttc #onpoli pic.twitter.com/praIZN8EKg

My commute took over an hour and forty minutes today...here's what St Clair West station's platform looked like. We need to materially invest in the TTC. Now. pic.twitter.com/tdKk6KSto3

The ongoing series of transit delays that seem like an inescapable nightmare, reinforcing the notion that TTC actually stands for "Take The Car" - no matter how much TTC drivers "appreciate your patience".

Nothing can ruin your plans, mood, day, faster than the Toronto TTC Just a horrible experience day in day out 😭 #toronto #ttc #stress pic.twitter.com/BTuXo6eUIJ

We as #TTC riders know that delays due to 'signal problems' are really due to chronic underfunding. Same with overcrowding. Instead of @TTChelps now I'll be sending these direct to @JohnTory & @JayeRobinson 2 people with the power to change it. pic.twitter.com/ObVFZfOlzi

When a delay at York Mills can break the back of the #TTC, we thank our lucky stars the Relief Line being done in 2029 guarantees us at least 10 more years of fun pic.twitter.com/oOG8eQ5v8Y

TTC line 3 has been shut down tonight, with many passengers waiting hours for the shuttle buses to get them home @CBCToronto #onstorm pic.twitter.com/EMX1UG0ufQ

The only thing on the TTC you can count on pic.twitter.com/nCOAykXSRK

#rushhour on the #TTC 🤦‍♂️ (p.s. we all know you try but so much lost revenue!) @TTCnotices @TTChelps pic.twitter.com/fGLjAHSMkK

Unexpected conditions have the power to ruin a TTC commuter's entire day in a matter of seconds.  Unfortunately for transit riders, whining about how the TTC is at fault for your late arrival to an important work meeting (again) is only so cathartic.

Like when a TTC bus got jammed inside the tunnel at Warden Station.

Man with no vital signs after being stabbed in the chest at TTC Kennedy Station on Eglinton Av E. The station is now closed, crowds of people trying to board buses. Victim transported by emergency run. #Toronto pic.twitter.com/9J674dp6em

The high winds have resulted in a mattress on the subway tracks at Rosedale station. That's a new one. #TTC pic.twitter.com/6VeBa71ggI

The unpleasant sights, sounds, and smells of the TTC.

A mouse was spotted inside a patty store at a #TTC subway station https://t.co/lIKZlNVm2o #Toronto pic.twitter.com/1SEiasVjVu

Screeching trains start at 8am Sundays instead of 6am other days. This thread pulls together story of secrets, lies and bad government @cityoftoronto involving #TTC @NWestoll @JohnTory @JayeRobinson @epdevilla pic.twitter.com/EUVBtupZRA

READ ALSO: The TTC Is Shutting Down Their Main Subway Line Almost Every Night This Week

All. The. Protests.  Not that we don't support local TTC employees, union members, or any other group that chooses to publicly advocate.  But when it disrupts our commute, it just adds fuel to the fire.

We're at Queen's Park station to make sure that #OURsubway stays in Toronto's hands! The TTC needs more funding, not a provincial takeover that will cause more chaos and delays. @ttcriders pic.twitter.com/4PsTmLUSLN

Watch as a woman blocks a TTC bus during rush hour Friday evening to protest the bus being overcrowded pic.twitter.com/PxShrRM0NQ

506 Carlton: Major delays near University Ave Queens Pk Stn due to a protest.

Apologies, there is a protest at Bay causing delays to service, route supervisors working on making some adjustments ^TH

So, remember this the next time you tolerate a slow and painful ride on the TTC: though the vast majority of Toronto transit users will complain about Toronto's abhorrent transit service, someone somewhere is utterly and completely beguiled by the Red Rocket.  And with the 10 cent fare hike planned for April 1st, it seems that the TTC will be once again getting the last laugh.

Your #TTC has been awarded Transit System of the Year for 2017 by @APTA_Transit! Congrats to all! pic.twitter.com/eQdy7ZWZj4

Disclaimer: The opinions expressed in this article are the author’s own and do not reflect the views of Narcity Media.