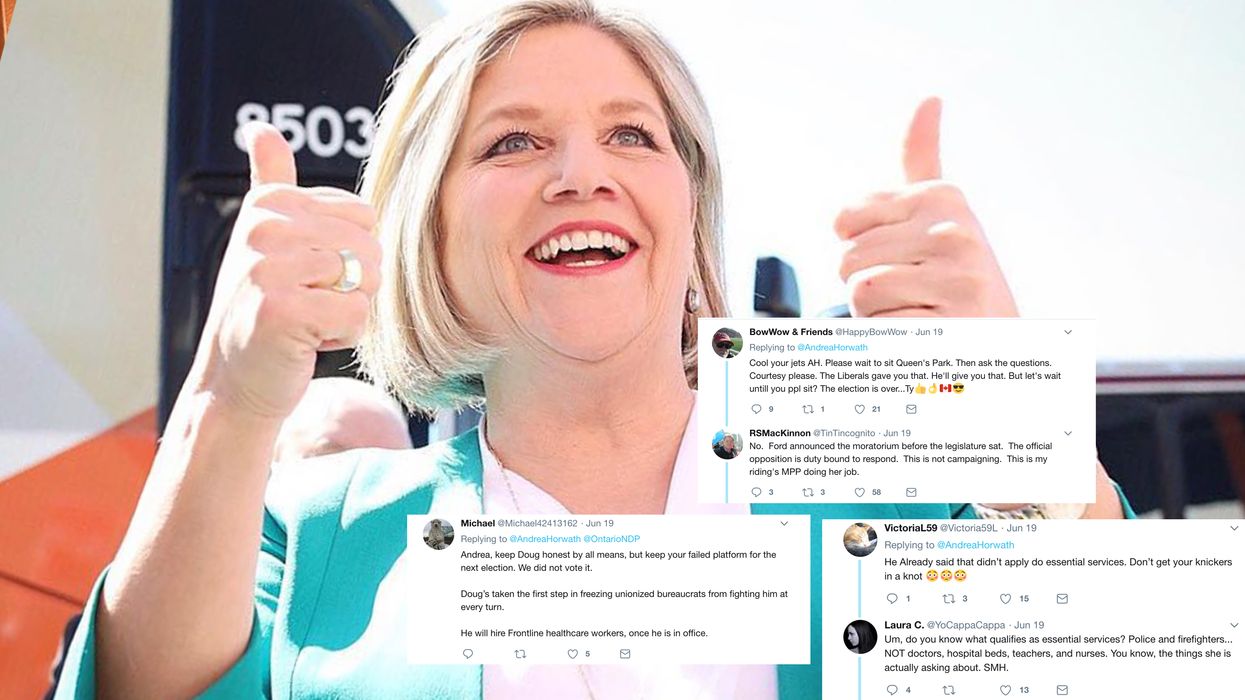 Anyone aspiring to work in these industries now has a slim-to-none chance of landing a job. Except for nurses and teachers, who Doug Ford claims are exempt from the freeze. Andrea Horwath, who represents the NDP party and lost to Doug Ford in the provincial election, wrote a very passive-agressive open letter in retaliation to the hiring freeze. The letter was a "request" to Doug Ford for the immediate release of specific details about how Ontario's public sector workers and families will be impacted.

"My letter to Premier-designate Doug Ford requesting specific details on his hiring freeze. When it comes to health care, education, social services, emergency services and first responders — Ontario families deserve to know how people will be impacted." In the letter, Horwath says that "Ontario is experiencing a hallway medicine crisis," saying that it's become normal for patients to "spend days on a gurney in a hallway waiting to be treated." She also demands that Doug Ford makes it explicitly clear which public sector staff are to be excluded from the freeze, because "Ontario families need and deserve to know the specific details."

The letter has been shared on Twitter over 1,200 times, and sparked absolute mayhem in the comments section. Doug Ford doesn't take office until June 29th, and people are already fuming over his controversial decision.

"Ontario has the best run and least costly private sectors in Canada, but Doug 'Trump Junior' Ford will strip it to the bare bones, to give tax breaks to him and his wealthy friends," one person writes.

But, most people in the comments are ripping Andrea Horwath to shreds, reminding her of the reasons that she lost to Doug Ford and accusing her of butting into Doug Ford's decision-making before he's even become the Premier.

Here's a snapshot of the angry Ontarians that are inundating Andrea Horwath's Twitter feed:

"This is why you were not elected," one Horwath hater writes, "he is trying to cut waste, not perpetuate it like you were planning. This is what he was elected for so maybe let hm do his job."

Well, the people have spoken. Unfortunately, they don't have nice things to say about Andrea Horwath.