The signs and banners are becoming increasingly controversial. 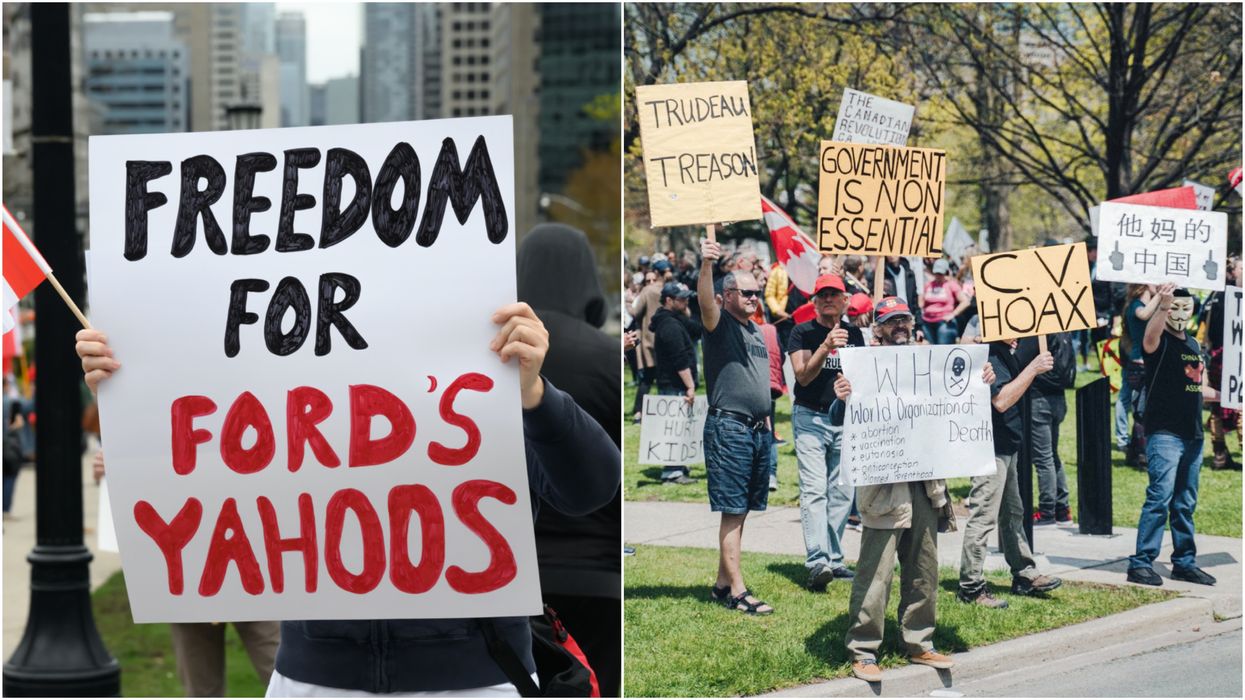 As Ontario slowly begins to reopen, anti-lockdown protestors in Toronto are still out in full force. On Saturday, a crowd of activists returned to Queen’s Park to protest the province’s COVID-19 restrictions and closures. This week, reports suggest there were more protestors than ever before, and their signs took aim at gun control, vaccinations and the government.

On Saturday, May 16, demonstrators gathered for the fourth weekend in a row at Toronto’s Queen’s Park.

This week, those involved carried signs and banners that addressed new Canadian gun laws, the media and vaccinations. Many of the placards also had messages of a religious nature.

According to reports from The Post Millennial, around 500 people were present at this week’s protest, which would make it the highest anti-lockdown turnout in Toronto so far.

Despite strong recommendations from the city, most of those present were not wearing face coverings or masks, and were not maintaining the recommended distance of two metres apart.

Similar to the previous protests, demonstrators were spotted holding signs that read anti-gun law messages such as “COME AND TAKE IT,” as well as anti-vaccination messages such as, “I HAVE AN IMMUNE SYSTEM.”

This week, a number of signs with a religious nature were spotted, with messages such as "God reigns supreme," and "Freedom is God-given."

Placards also took aim at health officials such as the World Health Organization (WHO) and the federal government.

"THE W.H.O IS POO," was the message on one banner, and another accused Prime Minister Justin Trudeau of "high treason."

Those in attendance reportedly claimed to be protesting the loss of income due to lockdown restrictions, as well as protesting the fines given to those who have been exercising their freedom.

These signs from today’s anti-lockdown protest at Queen’s Park tell you everything you need to know about the main… https://t.co/UOcltiOMoa
— Luke LeBrun (@Luke LeBrun)1589654867.0

As spotted in previous protests, there were also a number of people present holding the Canadian flag upside down.

Several weeks ago, Ontario Premier Doug Ford blasted those protestors, calling them “a bunch of yahoos,” and describing their actions as “irresponsible, reckless and selfish."

In response, one protestor was spotted this week holding a banner that read, “Proud ‘Yahoo’ For Freedom.”

Your analysis is mostly accurate but for a month there've been weekly protests across the country. END THE LOCKDOWN… https://t.co/s0qulKqS48
— Paul Fromm (@Paul Fromm)1589712503.0

The protests continue in Toronto, despite the province's making moves to begin to reopen the economy.

This week, Premier Doug Ford announced that some smaller stores would be able to start reopening with curbside pickup options, while big companies such as IKEA and Starbucks are also beginning to restart operations.

Garden centres and golf courses are also gradually reopening, and the province is considering raising the size limits on gatherings from five people to ten people.