The vehicles can run for as long as 16 hours after charging for just 2 hours. 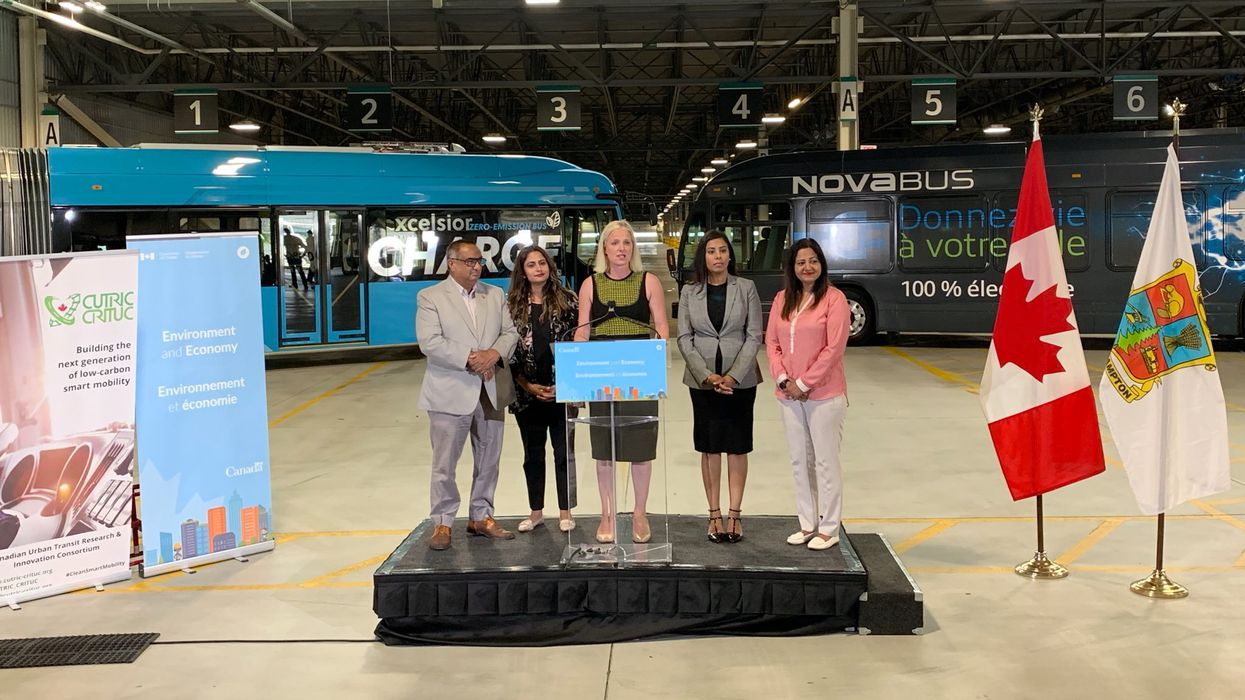 The Ontario city of Brampton is getting a fleet of electric buses thanks to funding from the federal government. It was announced today in the GTA city that Ottawa will fund more than $11 million to buy the buses and help create a charging system in the city. The new Brampton electric buses can run for 16 hours and charge in less than two hours.

Catherine McKenna, Minister of Environment and Climate Change, made the announcement this morning at a Brampton Transit facility. The investment of over $11 million will include $7.6 million from the Low Carbon Economy Fund.

The remaining $3.5 million will come in the form of an investment from Natural Resources Canada's Green Infrastructure Program to facilitate the installation, operation, and maintenance of four 450kW charging stations and eight battery-electric buses, states a release.

The plan for electric buses in Brampton has been an ongoing effort since 2015 when the city and Brampton Transit started working with Canadian Urban Transit Research & Innovation Consortium, according to Brampton mayor, Patrick Brown.

The National Observer reported that the electric bus project was one of many emissions-reducing schemes across the province that lost funding collected from cap and trade when the Ford government pulled the province out of an international clean energy trading market.

"Unfortunately, the Ford government is backtracking, cutting, and not committed to climate action, but cities are. They're on the frontlines," McKenna told reporters on Monday. "We're reinvesting in that [electric bus plan]."

But now, the federal government is stepping up to provide funding for the project.

"It's our responsibility to that next generation to pass on to them the beautiful country, the beautiful environment that we have," said Brown.

Brown believes in making Brampton a green city, and a climate emergency was declared last month along with directives to reduce the city's greenhouse gas emissions by 80 percent by 2050.

The electric buses are hoped to be part of the solution, a sentiment echoed by MPs and the mayor during the press conference.

"We need new energy-efficient transportation technologies to be part of our everyday life," said Brown.

This is wonderful news! Great to see #Brampton leading the way on such a forward-looking green development https://t.co/ejjxTuvNMB
— Sukhwant Thethi (@Sukhwant Thethi)1564420267.0

Meanwhile, McKenna put Conservatives on blast for not believing in and/or supporting climate change action, saying that everyone needs to work together.

"The world is looking at us," she insisted.

The announcement is intended to be the first step of an ambitious plan to introduce electric buses to several Canadian cities, also including Vancouver and the GTA's York Region, states a release.

There is no date for when the buses will start moving on Brampton streets.

You can watch the full announcement here.