One man was killed in the fiery crash. 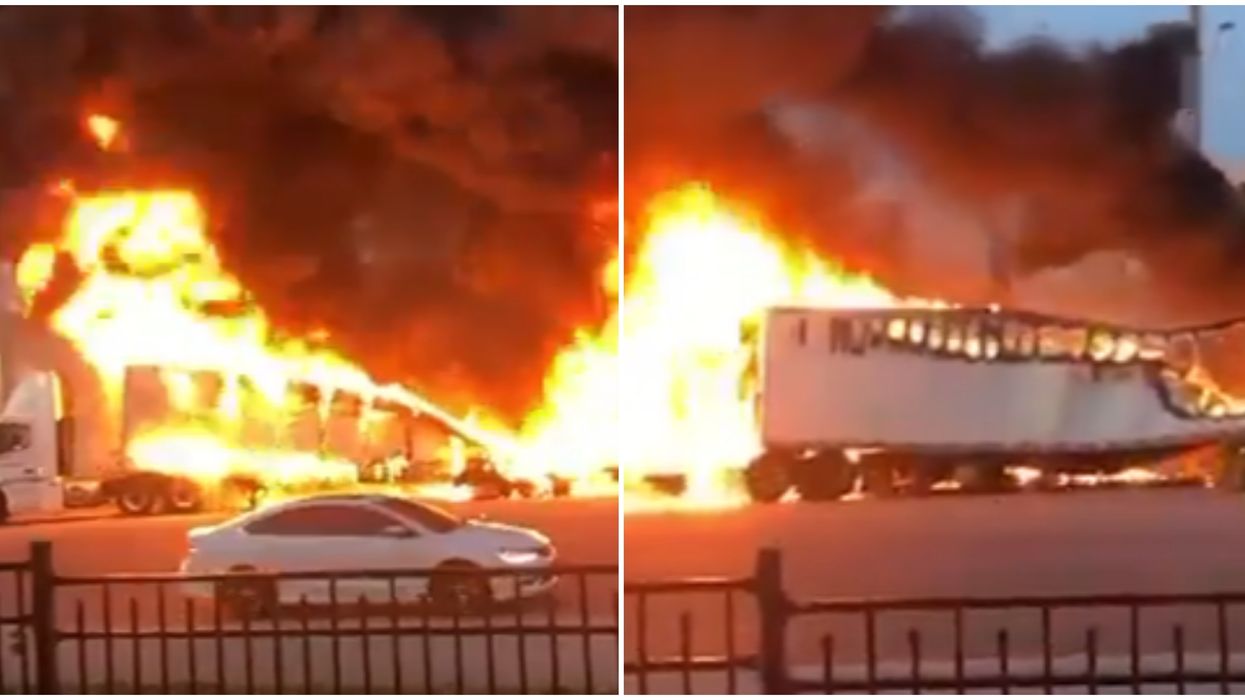 A huge fireball lit up part of the GTA on May 26 after a Brampton truck crash caused an apocalyptic scene. Huge clouds of black smoke and bright orange flames could be seen after two transport trucks crashed, leaving one man dead and another injured.

Peel Police arrived on the scene in Brampton's east end on Monday night after receiving a call at around 8:51 p.m.

Officers responded to the area of Highway 50 and Castle Oaks Crossing in Brampton after two trucks had been involved in a serious crash.

About 30 minutes later, Peel Police updated the public and stated that one of the drivers had been able to exit the truck safely.

However, the other driver unfortunately passed away.

Although it is still not certain what exactly happened or what the trucks were carrying, residents nearby were able to capture the incident and share it onto social media.

The scenes were pretty apocalyptic.

"Me and a couple of my cousins were in my backyard where we heard three huge bangs," Katia Galati, who was able to capture the terrifying aftermath, told Narcity via email.

"We were all confused but ignored until we heard sirens and at that point we knew something was wrong and it happened close by."

Galati added: "We then ran to the ravine near our house where we saw huge clouds of black smoke and crowds of people who were also concerned."

As both Peel Police and Brampton Fire were trying to handle the situation, Highway 50 was temporarily closed from Trade Valley Drive and Rutherford Road.

The highway wasn't able to reopen until Wednesday morning.

As of the time of writing on Wednesday, there is no confirmation as to what caused the crash.

As for the horrible truck crash, there is no word as to the current status of the injured driver.

This wasn't the only dramatic incident to occur in the GTA on Tuesday evening. A daylight shooting in Toronto's Entertainment district left a 21-year-old man dead and two others injured.

The victim is reported to be Toronto rapper Houdini, and the shooting has left many celebrities to mourn the death of the up-and-coming star.