Haeley DiRisio arrived in Europe before COVID-19 even left Asia. 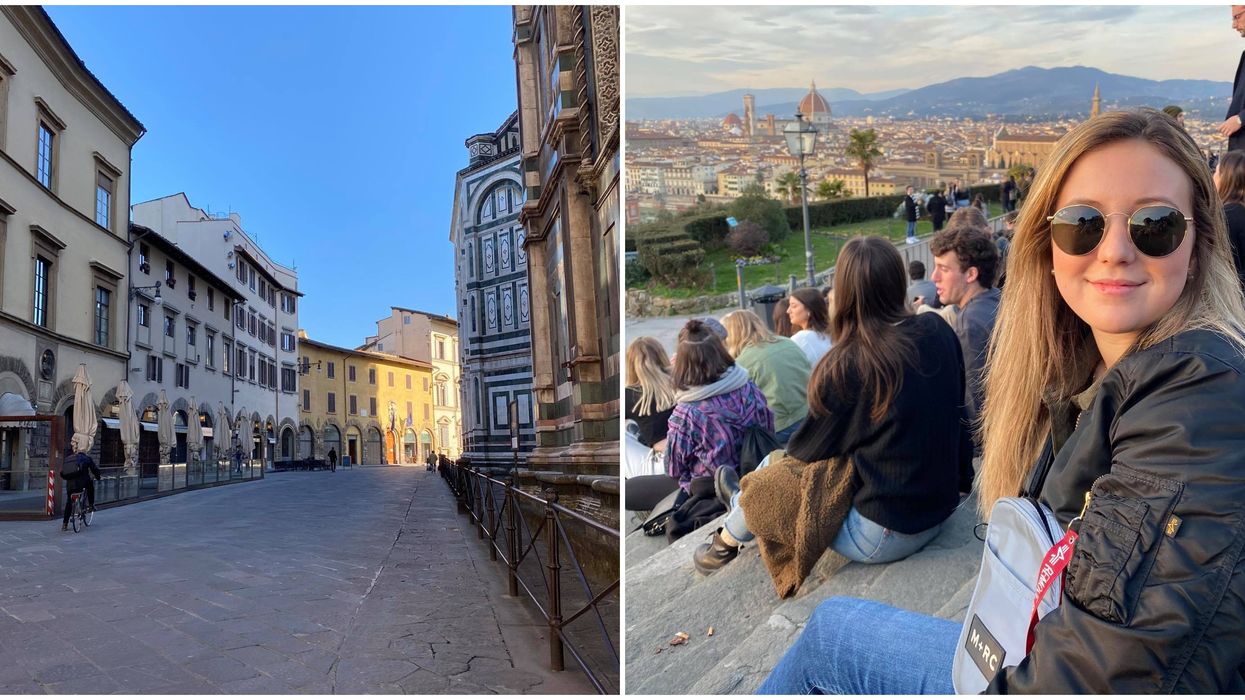 With the number of COVID-19 cases increasing in Italy and the country currently in lockdown, being stuck there is far from ideal. And for Canadian residents trapped abroad, the wait to come back home goes on and on. That's the case for Haeley DiRisio, a Canadian trapped in Italy, who has shared her experience with Narcity.

According to CNBC, Italy's Prime Minister Giuseppe Conte spoke with newspaper Corriere della Sera on March 19. He stated that the current lockdown in the country will last well past April 3, as the death toll has increased.

Conte's Canadian counterpart Justin Trudeau has already closed borders to non-residents of Canada, starting Friday or Saturday for the U.S.

Meanwhile, DiRisio has been looking for help to leave Italy.

She initially arrived in the country on January 20, back when only four countries had confirmed cases of COVID-19.

The very next day, the first case outside Asia was confirmed by the CDC in the United States. By January 24, it had reached Europe via a case in France, and on January 30, Italy also reported its first infections.

DiRisio, a GTA resident, worked as an au pair and planned to stay for a couple of months upon arrival. However, she stopped working in late February, shortly after she started hearing about American students being sent home.

"That was actually when I started hearing about the American students being sent home, and what was my first initial shock of it — because obviously I heard about it and I knew there were some cases here in Italy,” shares the young Canadian via a phone interview with Narcity.

By this point in late February, the number of Italian cases had exploded. It would hit far, far greater heights within a couple more weeks.

“My friends and family were like, ‘you need to come home’, but I’m like ‘there were no cases here in Florence, like I am fine,’” says DiRisio, who was staying hopeful that the virus would be contained.

That's when it took a turn for the worse. Schools started closing and the same weekend, northern Italy was shut down.

And as people from the north started fleeing to the south, DiRisio decided to book her flight back home.

“When I heard that, I was like ‘I need to book a flight home because this is about to become a really big issue’," she says.

"So, I booked my flight on Monday afternoon when I heard about that and I’ve just been getting flight cancellations because they shut down the country,” shares DiRisio.

She planned to fly from Florence to Paris and home to Toronto but had that cancelled. She then tried to book a flight through alternate routes but still found no luck.

Although Trudeau vowed to help Canadians stranded abroad through an emergency fund, DiRisio is still struggling to find flights back home.

“My dad's been in touch with our local MPs, he's been like calling her every day. He’s also started talking to a travel agent to see if there are any commercial flights,” she shares.

“I got a flat here, so I have my apartment. I was supposed to stay here until June regardless so I am lucky I have a place to stay.”

Stuck having to wait and with no current updates on her situation, DiRisio finds herself waiting until the airlines open in Italy.

"I don’t know because here the lockdown is supposed to end on April 3 but that could change and then if Canada is still on lockdown that I don’t know," she says.

"It depends on if they’re gonna open up the airlines to Italy again. When that will happen?