Pour one out for Deebo. 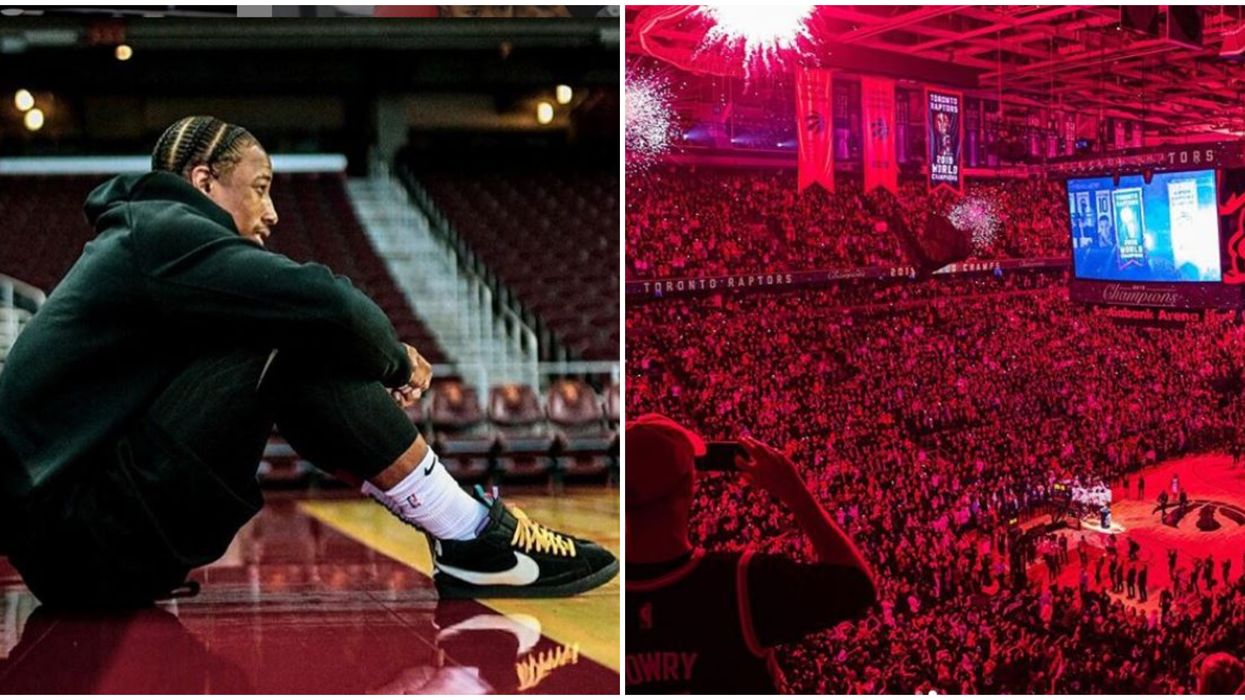 What a night Tuesday, October 22 was in the history of Toronto, and Canada. The Toronto Raptors' home-opening win over the New Orleans Pelicans saw the NBA champions honoured with banners, championship rings, and a sell-out crowd. The world was watching, but former Raptors favourite DeMar DeRozan wasn't.

DeRozan told Jeff McDonald of the San Antonio Express-News that he "just didn't want to" look on while his former team, ex-teammates, and friends received their dues.

"I just didn't want to," DeRozan admitted when asked whether he watched Toronto's historic night. "I've seen highlights though. The night before, I talked to all the guys I played with, congratulating them."

The fact that DeRozan may not have had the stomach to watch the title celebrations shouldn't be too surprising, and neither should the fact he made sure to reach out to his former teammates, who include the likes of Kyle Lowry, Fred VanVleet, and Pascal Siakam. DeRozan is still tight with many Raps, particularly those who were core members of the franchise during DD's time at the then-Air Canada Centre (RIP).

That much was clear from DeRozan being spotted during the NBA offseason hanging around and shooting hoops with the champion Raptors.

His brotherly love shared with Kyle Lowry is much documented and virtually a part of recent Toronto sports lore all by itself.

In fact, DeRozan doesn't just love Lowry et al, but he's still never lost all those feelings he caught for the city of Toronto and its people during his near-decade at the franchise.

“I get drafted and go to another fucking country….I didn’t even have a passport!” 🇨🇦🤣 @DeMar_DeRozan keeps it real… https://t.co/8pmutmMrwD
— UNINTERRUPTED (@UNINTERRUPTED)1571955280.0

He was notably vocal in congratulating his former team when they won Canada's first NBA title back in June.

And, on Friday, the San Antonio Spurs man revealed that he considers being traded to Toronto back in 2009 as the greatest thing to happen to him during his career.

A reminder that that's despite the fact he was traded away with no say of his own on the eve of the team's explosive success.

No wonder he's still such a popular figure in Toronto.

DeRozan will be featured on HBO's The Shop on Friday night at 9:30 p.m. ET.