Someone Just Donated $16,000 To The Dog Who Was Allegedly Thrown From A Toronto Balcony

The puppy suffered horrific injuries from the fall. 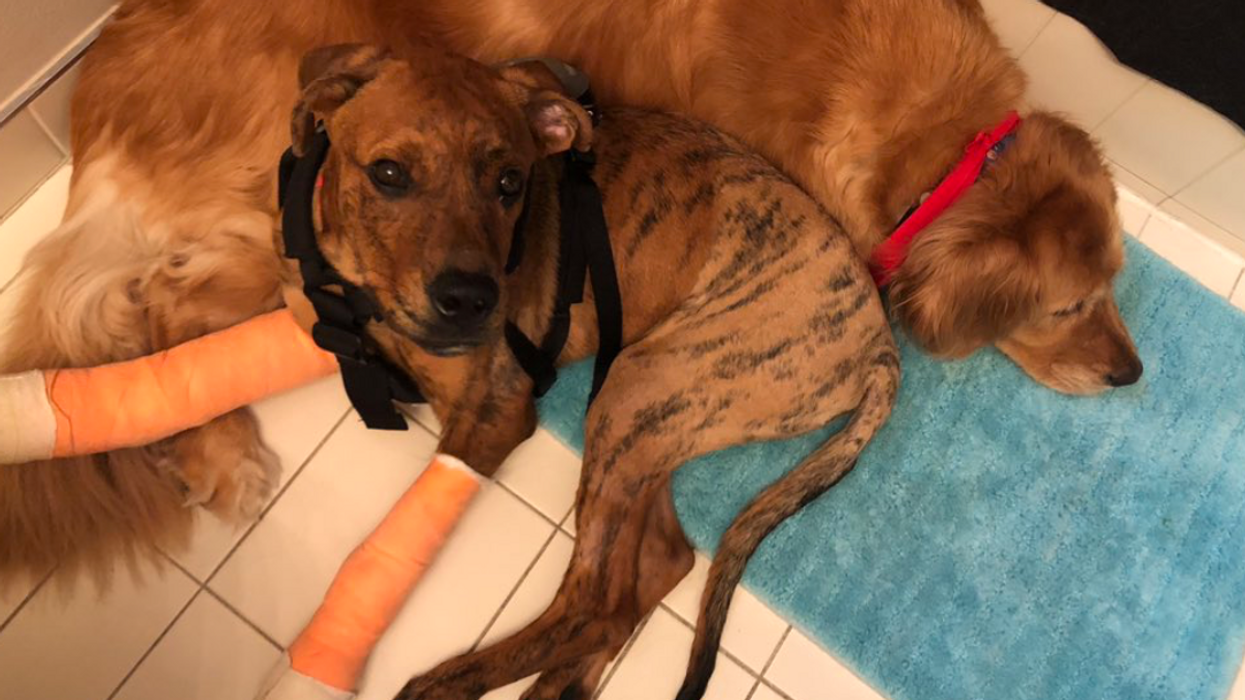 One Toronto pup has finally had a bit of good luck after a kind animal-lover from Canada donated a significant wedge of money to help with his ongoing medical costs. The dog was reportedly thrown from a Toronto balcony this month. His name is Logan and he suffered horrific injuries, including hemorrhaging in his chest and abdomen.

The incident took place on July 6. Toronto police were called to the scene where a dog was found severely injured and was believed to have been tossed from a sixth-floor balcony. Logan the puppy was rushed to a veterinary hospital, where he was treated for a number of extensive injuries, including fractured legs, a fractured pelvis and two fractured wrists.

The acting direction for Toronto Animal Services (TAS), Esther Attard, said, “He [Logan] was hemorrhaging into his chest and abdomen, and had to spend several days in ICU receiving a blood transfusion.”

Upon further investigation, the vets realized that little Logan had suffered even more than they realized. While treating Logan’s multiple injuries, the staff at the hospital found that the young dog also had rib fractures from a previous trauma, meaning that this was not the first time he’d been seriously hurt.

Medical bills for seriously-ill animals like Logan can get pretty expensive, and the cost can put excruciating pressure on charities or services. However, when Toronto Animal Services put an appeal out to the public for donations to Logan’s care, they were not expecting such a heart-warming response.

When Eric Margolis heard Logan’s story, he was so profoundly affected that he immediately offered up $16,000 to help with the poorly puppy’s care. Speaking to the Toronto Sun, Margolis said, “I have deep compassion for the suffering of animals and Logan’s story underlines the cruelty and suffering animals go through.”

“If I didn’t do it, nobody would, it was money well spent,” he added.

Speaking about the huge donation, TAS wrote on social media, “We are humbled by the well-wishes and donations given for his [Logan’s] care, which will cover his surgery costs and give him a chance for a new life and family.”

The statement continued, “We want to thank one particular donor, Eric Margolis, who donated a very substantial amount in memory of his dog Robbie, gone but not forgotten. 100% of this donation, as well as all donations given last week, will go directly to Logan’s care.”

We are humbled by the well-wishes and donations given for his care, which will cover his surgery costs and give him… https://t.co/qCiA5AnITT
— TO Animal Services (@TO Animal Services)1564096068.0

While Logan still has a long road to a full recovery ahead, he is improving every day and is enjoying life with his new foster family. A representative from Toronto Animal Services said, “While he is expected to make a full recovery, he may have abnormal-looking wrists for life, with reduced range of motion and an increased risk of osteoarthritis.”

According to TAS, the alleged animal cruelty and abuse has been reported to both police and the provincia hotline for animal welfare concerns.

Toronto Animal Services wrote, “Working in animal rescue is often heartbreaking, and stories like Logan never get easier for us. But it’s always best to focus on the people who are helping change lives. Thank you to everyone who helped change Logan’s.”