From the creators of Justin Trudeau’s ‘Speaking Moistly’ hit song. 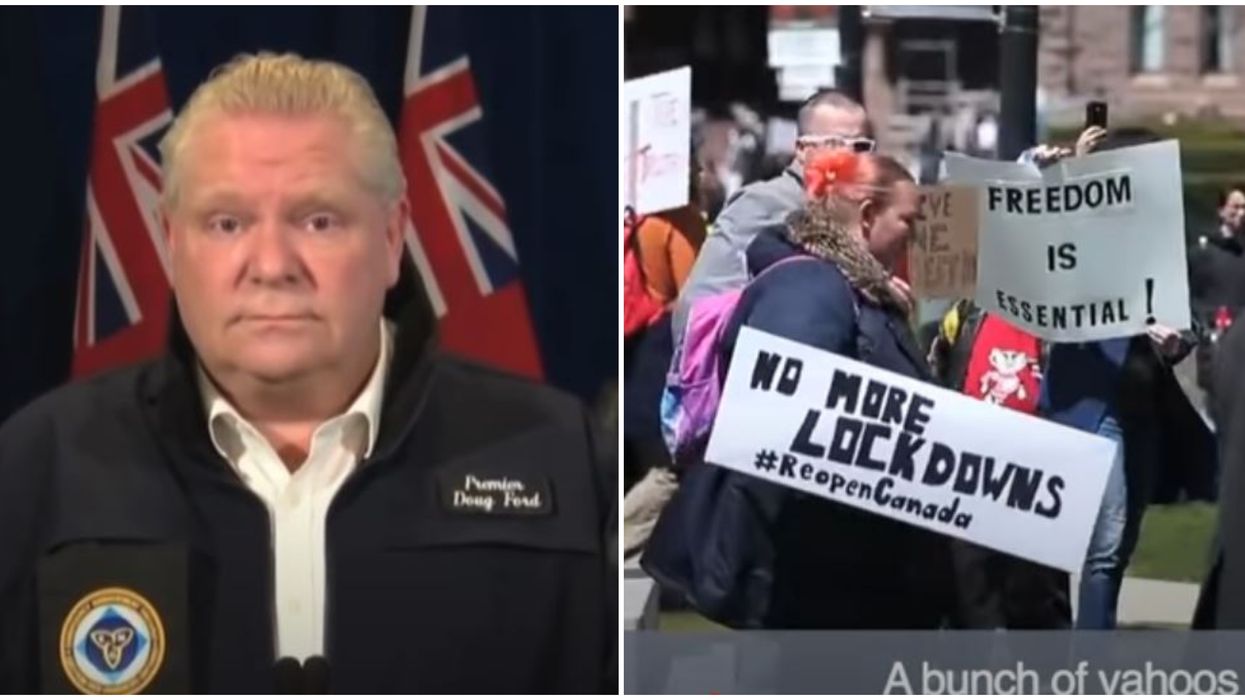 First Trudeau, now Ford. That’s right, the Edmonton-based musician who brought you “Speaking Moistly” is back and just as funny as before. Now, Ontario Premier Doug Ford’s “Bunch of Yahoos” comment has been turned into a song and it’s the follow-up track we all need right now.

If you thought you’d never get “keep two metres apart, speaking moistly” out of your head, just wait.

The newest song by musician Brock Tyler, who spoke with Narcity a couple of weeks ago about that Trudeau pastiche, has the same catchy '80s synth-pop vibe as the last hit, but with all new lyrics.

Although, it's not entirely Trudeau-less, as the Prime Minister does make a pretty hilarious cameo in the music video.

In case you're wondering what this is all about, let us fill you in.

During an April 25 address, Doug Ford was quoted referring to Queens Park protesters as “a bunch of yahoos.”

Little did he know he was laying down the lyrics for the next hit quarantine track.

"'Bunch of Yahoos'" took a few days of on-and-off work to put together because the song and the visuals are more involved than 'Speaking Moistly,'" Tyler told Narcity on Friday by email.*

"For 'Bunch of Yahoos,' there were two sides to the story so it required me to build the narrative a bit more leading up to the chorus. Plus, there are three singers in this one, so it took more effort to make it all work together."

At the time of writing, “Bunch of Yahoos” has over 12,000 views on YouTube, though we expect that number will climb quickly.

So if you need a good laugh or a new song to sing around the house, dive into this.

You certainly won’t regret it.

Following the April 25 anti-lockdown protests in Queen's Park, Ford stressed how important it is to re-open Toronto slowly and safely.

When discussing the protesters, who had some pretty intense sings, Ford suggested the protest was selfish and reckless.

He went on to say the iconic lines that would become the makings of Brock's latest remix.

"But then we have a bunch of yahoos out in the front of Queen’s Park sitting there protesting that the place isn’t open, as they are breaking the law," he said.

It sounds better in the musical version, let us tell you.

"I think it’s tough to top 'Speaking Moistly' as a meme and as a shared moment for Canadians, so that song has kind of set the bar. 'Bunch of Yahoos”' has been slower to gain momentum, which I expected, but people seem to be enjoying it," he told Narcity.

"I knew going in that this couldn’t replicate the magic of that 'Speaking Moistly' moment but I’m happy with how it turned out. Plus, Doug worked really hard to hit those high notes and I think he totally nailed it."

Just when you thought "Speaking Moistly" was going to be the bop of 2020, we are blessed with "Bunch of Yahoos."

Brb, off to put this hit on repeat.